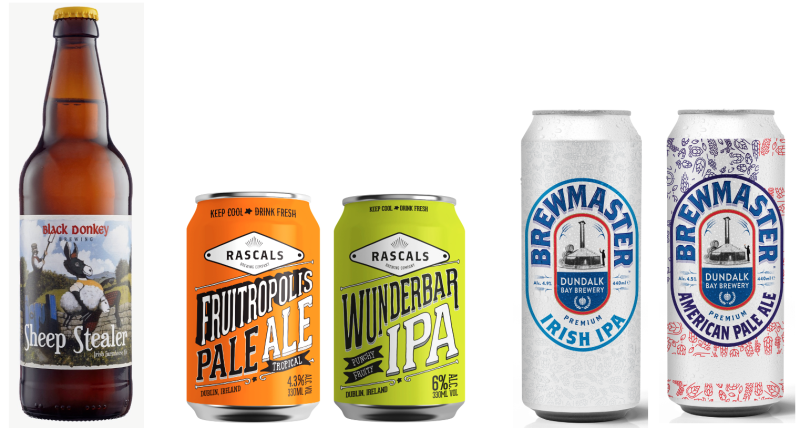 The craft beers that are being showcased by Aldi, including the Brewmaster IPA and Pale Ale from Dundalk Brewing Company

As with many businesses, the Covid-19 pandemic has had a devastating impact on the operations of small suppliers across Ireland.

Supermarket chain Aldi will look to help some of those suppliers through their Craft Beer Event, which will highlight three small Irish breweries by showcasing some of their best craft beers with a Louth distiller set to be one of those featured.

Dundalk Bay Brewery and Distillery is a family-owned company that started from a vision and passion for building similar sized alcohol making facilities.

Their founders own the sister company, engineering firm Spectac International, which creates bespoke breweries and distilleries for clients all over Ireland and the EU.

The company will have their Brewmaster Pale Ale and IPA products available in 145 Aldi stores across the nation from March 18th.

The idea for the beers came about one day in 2018 when they decided to take a leap of faith and build their own living and breathing independent craft brewery. Soon after, their in-house beer brand, Brewmaster was born.

Speaking about the partnership with the German supermarket giant, the brewery’s founder Faye Healy was delighted to be featured, believing it to be a vital platform to showcase their premium beers to a wider audience.

“This last year has been tough with the current climate, especially as over 70% of our business was in the on-trade” she stated.

“Fortunately, we have seen a big increase in our off-trade sales and this showcase is the cherry on top. Aldi has been brilliant in giving us this opportunity and we will remember that as we continue to reach new heights going forward.”

Rascal Brewing Company in Dublin and the Black Donkey in Roscommon are the other breweries to be featured in the showcase, with beers from all three priced at €2.45 a can.