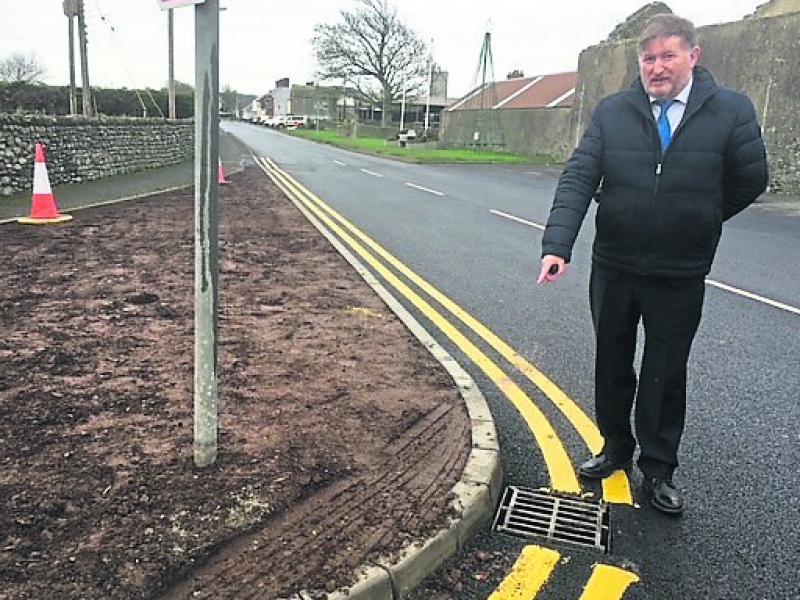 Cllr Pearse McGeough showing where vehicles have to mount the pavement

Sinn Féin Councillor Pearse McGeough has welcomed the completion of a promised review into the new junction layout at Farm Road in Annagassan.

The junction was ‘upgraded’ recently but according to Cllr McGeough, “they narrowed the entry/exit so much that there is barely a full car breadth between both lanes.”

Concerned about the reduced access for emergency vehicles, he demanded a review into the works, describing them at the time as ‘an embarrassment’ and has now received confirmation that the review is complete.

“Firstly, I want to thank the engineer at Louth County Council for acting so quickly on this” he stated. “I have been told there will be a ‘modification’ of the junction and there will also be a footpath from Slans down towards the Glyde Inn direction”.

“This should be done in conjunction with the modification of the junction so that the footpath will not impede on the junction in any way.”

The Castlebellingham based councillor was adamant the road needed work to become safer and will keep tabs on the project to make sure it is swiftly dealt with.

“I am hopeful the junction is going to be corrected and will be done fairly soon but I will be monitoring this very closely and look forward to the improved Farm Road junction where large vehicles can pass as easily as very small vehicles.”