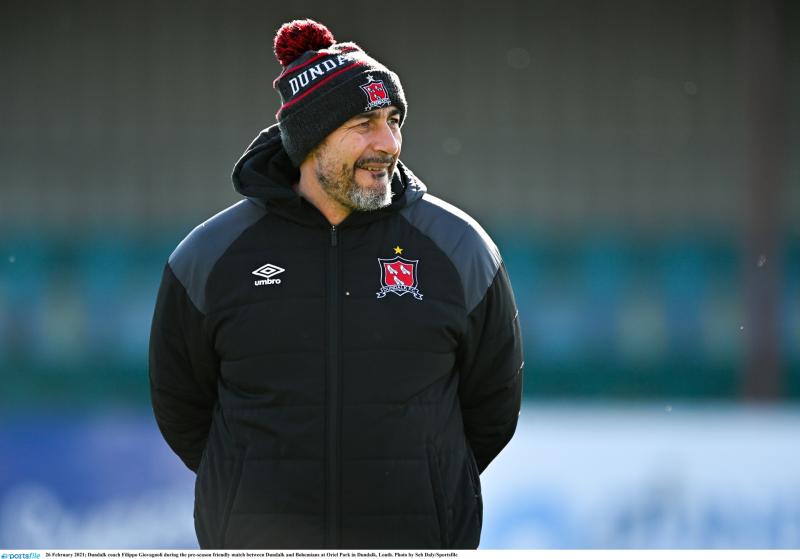 Dundalk coach Filippo Giovagnoli during the pre-season friendly match between Dundalk and Bohemians at Oriel Park. Photo by Seb Daly/Sportsfile

Dundalk FC have begun their pre-season programme with a 2-1 home win over Bohemians.

Starts were handed to new signings Alessio Abibi, Sonni Nattestad, Raivis Jurkovskis, Ole Erik Midtskogen and Ryan O’Kane, with the latter impressing throughout the first half.

However, with the SSE Airtricity League season just three weeks away, there was no place in the squad for Brian Gartland, Michael Duffy, Patrick Hoban, Sean Murray and Daniel Kelly.

The Lilywhites started brightly and they had the first chance when O’Kane’s corner was flicked on by David McMillan before being turned over by Midtskogen from close range.

Latvian international Jurkovskis was showing some real quality out on the right flank and it was from his cross that McMillan’s turn and shot was tipped over the bar by James Talbot.

Bohs started to grow into the match after that, however, and the evergreen Keith Ward slid a lovely through ball into the path of Bastien Hery, but he was just about beaten to it by Abibi.

From the resulting corner, the ball broke to Ali Coote, who was given the freedom of Oriel Park before unleashing a powerful shot from distance which was deflected onto the post.

Runners-up in the SSE Airtricity League last season, The Gypsies were starting to look the more likely and Tyreke Wilson saw his free-kick attempt pushed around the post by Abibi.

The visitors took the lead on 33 minutes when a misplaced pass from Greg Sloggett was latched onto by Liam Burt, who took the ball beyond the Dundalk defence before finishing.

Sloggett almost made amends when from his excellent through ball, the 17-year-old O’Kane got in behind the Bohs defence before seeing his effort trickle agonisingly wide of the post.

O’Kane, who is the grandson of former Dundalk chairman Tony, had another effort four minutes before the break when from a tight angle, he forced a decent stop out of Talbot.

After a ten minute cameo from latest addition Jesus Perez before the interval, new signings Peter Cherrie, Sam Stanton and Junior Ogedi-Uzokwe were introduced for the second half.

Dundalk found an equaliser on 53 minutes when a low cross from Jurkovskis was turned home from close range by McMillan – fresh from his FAI Cup final hat-trick last November.

The Lilywhites went in search of a winning goal and McMillan played in Patrick McEleney, who had come off the bench, and he forced a good stop out of the Bohs goalkeeper Talbot.

Dundalk won the match on 76 minutes when Darragh Leahy’s cross from the left was finished from close range by Junior, who only joined the club on Wednesday afternoon.

Drogheda United will be the opponents in Dundalk’s next pre-season game on March 6th.