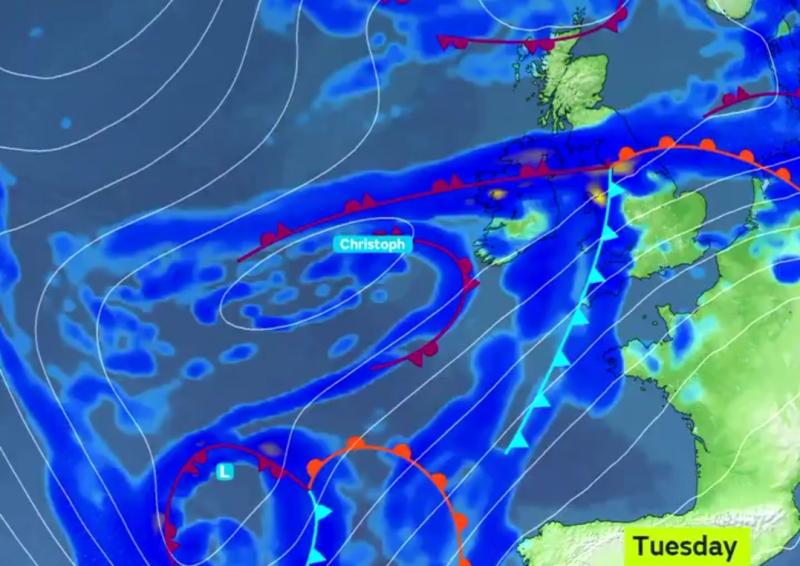 Met Eireann has warned of widespread heavy rain swept in by Storm Christoph which will put some areas at a risk of flooding.

The forecaster has issued Status Yellow rain warnings ahead of the storm named by Met Eireann's official forecaster in the UK - the Met Office.

Met Eireann says Tuesday will be wet and breezy in the morning with widespread rain. It will be heaviest over the northern half of the country with a continued risk of localised flooding.

The rain will be more intermittent and showery in the south during the afternoon, but there will bd some heavier bursts at times.

It will be a cold day for Ulster with highest afternoon temperatures of just 3 to 6 degrees, but milder elsewhere, ranging from 7 to 11 degrees. Winds will be moderate to fresh southwesterly over the bulk of the country and strong on coasts, with light northerly winds in the north.

Met Eireann expects outbreaks of rain to continue in many areas overnight, with the chance of sleet over the northern half of the country. However, a clearance will move into the northwest later in the night, with dry conditions over much of Connacht and Ulster by morning. Frost will set in quickly after dark in the northwest, with lows of between -2 and +1 degrees in Ulster and north Connacht. Less cold elsewhere with lows of 3 to 7 degrees. Patches of mist and fog will form in a light northerly breeze.

The forecaster says it will turn colder from Wednesday with rain turning to sleet in the southeast on Wednesday evening. Sunny spells and showers of rain, hail and sleet for the remainder of the week and next weekend, with temperatures a few degrees below normal and a widespread frost each night.

On Wednesday, Met Eireann says rain will be persistent in the east and south. Clearer in the northwest with scattered showers.

A light to moderate northerly breeze will introduce a colder airmass over the country and as temperatures fall through the afternoon and evening, rain in the midlands, south and east will increasingly turn to sleet, with snow over higher ground. A cold day with afternoon highs of just 2 to 5 degrees.

The rain, sleet and snow will clear away eastwards on Wednesday night, with scattered showers in the west and north, turning to sleet on higher ground. Frost will develop in lows of -1 to +2 degrees.