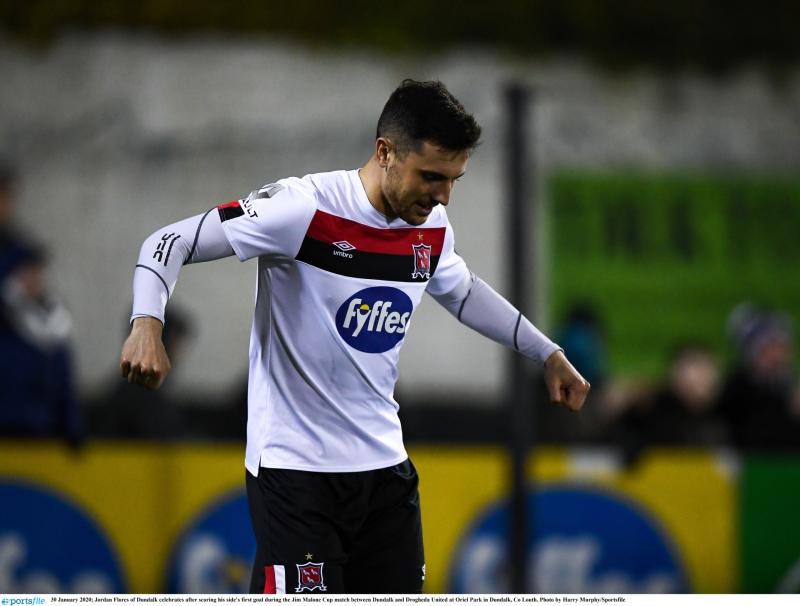 Jordan Flores has departed Dundalk FC and signed for English League One side Hull City on an 18-month contract.

The 25-year-old midfielder spent two seasons at Oriel Park after signing from hometown club Wigan Athletic ahead of the 2019 campaign, but played just 29 league matches since then.

Although his game time with Dundalk was limited due to injury and then Covid-19, Flores rose to international fame last February with a superb acrobatic goal against Shamrock Rovers at Tallaght Stadium which was subsequently nominated for the FIFA Puskas Award.

Impressive strikes in the Europa League group stages against Molde and Arsenal followed which drew the attention of several English clubs, with Hull ultimately winning his signature.

Milton Keynes Dons and Burton Albion had both expressed their interest back in the summer when it became known that Flores had turned down the offer of a contract extension at Oriel.

At home, St Patrick’s Athletic also inquired, but it is Hull that have obtained the services of Flores, who successfully underwent a medical at the KCOM Stadium on Monday afternoon.

Dundalk had remained hopeful of retaining a player that enjoyed a strong finish to the 2020 season, but it is understood that contract negotiations had broken down in recent weeks.

Despite being under contract for next season, it is understood that both Will Patching and Stefan Colovic are also to leave, with the latter currently back home in his native Serbia.