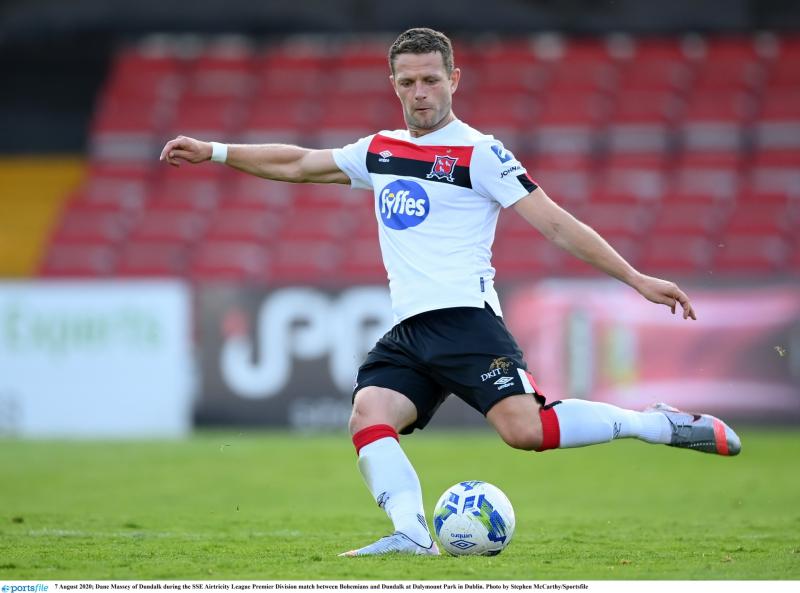 After announcing the end of his eight-year spell at Dundalk FC last night, Dane Massey has today completed a shock move to Co. Louth rivals and newly-promoted Drogheda United.

Massey, who was released by The Lilywhites in mid-December, made just shy of 300 competitive appearances for the club he joined from Bray Wanderers at the start of 2013.

One of Stephen Kenny’s first signings as manager, the left-back was an ever-present in an era which yielded five League of Ireland titles, three FAI Cups and three EA Sports Cups.

His last season at Oriel Park was curtailed by injury, however, meaning he missed out on a second Europa League group stage campaign after featuring heavily during the 2016 season.

Massey did find the net in his 291st and final game for the club last August, in a 2-0 win over Cobh Ramblers in the FAI Cup which started the Dundalk’s unbeaten run to cup glory.

That was Filippo Giovagnoli’s first game in charge, and the Dundalk head coach has paid his tribute to what was one of the team’s longest-serving players.

“He is a legend in Dundalk and in Ireland,” he stated.

“I feel so bad that I could not use him at the end of the season because I know he worked so hard to get back from the injury. It is something that will always be on the dark side of my heart.

“The club is moving in a direction to try and bring younger players in and, unfortunately, it’s just part of the natural cycle of life, but I respect Dane so much. He is a strong character, a strong player, a good man and I wish him the very best.”

Massey’s direct replacement at Oriel will most likely be Latvian international Raivis Jurkovskis, who officially joined the club just hours before Drogheda issued their statement.