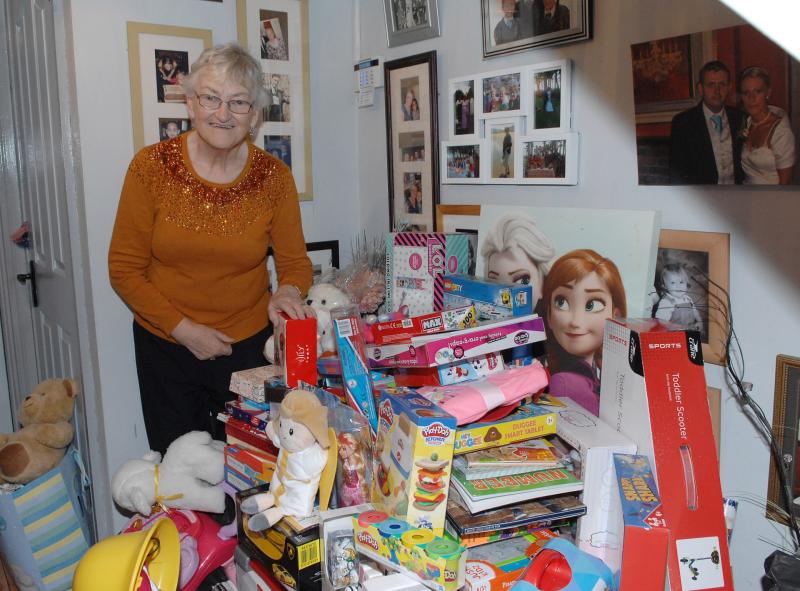 A local grandmother who asked family and friends to give just one toy each for children less fortunate this Christmas was overwhelmed with the generosity of people after she received hundreds to donate to Dundalk Women’s Aid.

Maureen Tuite made an appeal on Facebook for people to donate toys so children would have presents this Christmas and within days her home was like Santa’s grotto with her hall and rooms packed with bikes, dolls, toys and jigsaws.

Maureen, who has three grandchildren, said she only expected to get a small collection of toys and couldn’t believe the generosity of people in the community as the word spread.

The 73-year-old grandmother, from Mountain View on the Point Road, said she was “over the moon” to be able to give sacks of toys to Dundalk Women’s Aid for children this festive season.

She said: “I was sitting at home one night thinking about how my grandchildren want for nothing and there are children this Christmas who might not get toys and I decided to do something to try and help.

“I put an appeal out to my family and my few friends on Facebook asking them to give just one toy each for Dundalk Women’s Aid.

“I thought I would get a few toys, a small collection, that I could give them, but I couldn’t believe what happened, people ended up giving me hundreds of toys. “The word spread and I ended up with so many toys that my hall and rooms were packed with them.

“There are so many lovely people out there in the community and I was really overwhelmed by their generosity. “One person donated a brand new bike and others gave loads of toys, books, crayons and jigsaws.

“One man, that I didn’t know, arrived at my house with a big bag of toys. People also gave €100 worth of One4all vouchers and €190 in money.

“I also got around six gift sets for the mothers who deserve a nice little treat too.”
Maureen said it took two cars to deliver all the toys to Dundalk Women’s Aid who were delighted with the generous donation.

“It has made my day to know the children will have presents to open this Christmas”, Maureen said.

“It is a very difficult time for a lot of people, and this year has been tougher than any other for many, so I am just so happy to be able to help in some way.

“I was shocked that I got such a response, there are great people out there and I was just overwhelmed by their generosity.

“I have never done anything like this before, but I am so pleased that with the help of so many people’s generosity we can bring a little bit of Christmas magic to the kids.

“The thought that I have helped some mothers give their children the presents and toys they want for Christmas has made my day.

“I would like to thank everyone who was so generous donating so many toys.”