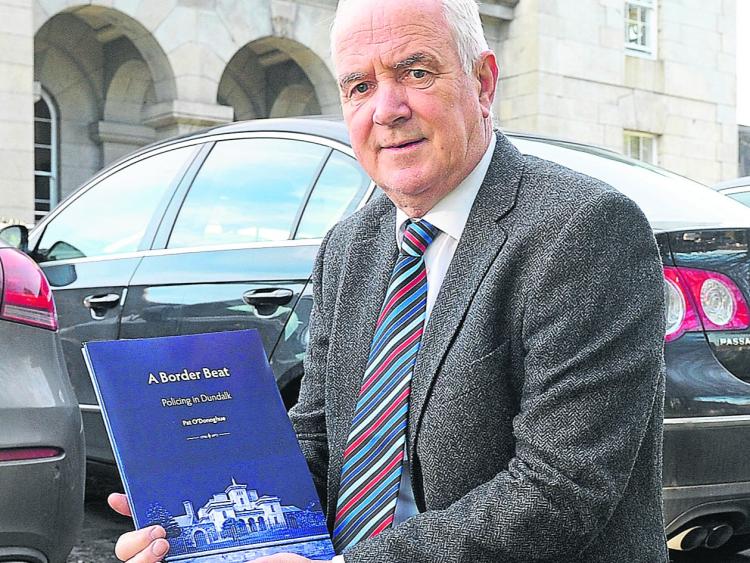 Local retired garda Pat O’ Donoghue has given a first- hand account of the many challenges faced by the force in Dundalk in his book “A Border Beat: Policing in Dundalk”.

The former garda, who served in the Dundalk Garda District for 30 years, gives an intriguing, comprehensive insight into key events and personnel in the area throughout the 70s, 80s and 90s in his new book that he is launching this week.

The ex-garda, who worked through those decades, said that due to Dundalk’s geographical position it was a “challenging and even dangerous area” for officers to serve in and felt this notable time had to be recorded.

Pat also documents in his engaging read a retrospective view of policing in the area from the era of the Royal Irish Constabulary in the 19th century to the earlier days of the Irish Free State.

The absorbing page-turn, which also has an impressive selection of photographs and illustrations, many from private collections, is due to be in local bookshops this week.

Pat, who dedicated his book to the memory of the five gardai who lost their lives in the course of their duty in Dundalk, is donating the proceeds from the sales of “A Border Beat: Policing in Dundalk” to the Dundalk Simon community and Women's Aid Dundalk.

Pat, who was based in Dundalk Garda District since the mid-70s before retiring in 2005, speaking to the Democrat said: “I felt it was really important to record everything that happened in Dundalk during that time.

“I was always interested in collecting old photographs and I met local photographer Paul Kavanagh who encouraged me to gather up old garda photographs of the time.

“I produced a commemorative booklet for the 75th anniversary of the force and in 2014 I was approached by the old Dundalk Society to give a talk on policing in the area and it was after that I decided to do this book.
“The stories come from the Dundalk people and I am now giving them back to the Dundalk people in this book.

“I felt it was important to capture that era before it was lost.

“And the money raised will be donated to two very worthy local charities.”

Pat writes in his book that the 70s were a “very violent era throughout Ireland and Dundalk” with armed robberies the norm.

He wrote: “New offences being brought before the courts related to abductions, shootings, possession of firearms with intent to endanger life, possession of explosives, hijackings, kidnappings and illegal membership of unlawful organisations”.

Among the violent, tragic events Pat documents from the 70s is the car bomb that exploded outside Kay’s Tavern on Crowe Street on December 19th 1975 killing Jack Rooney and Hugh Watters and the murder of Seamus Ludlow who was shot several times and his body discovered in Mount Pleasant on May 2nd 1976.

Pat also remembers in his book “one of the most riotous nights Dundalk has ever witnessed” when the European Cup tie between Dundalk and the Belfast team Linfield was played in Oriel Park which he describes as a “war zone” resulting in over a hundred people including 50 garda being injured.

Among many other events documented in the engaging book is when Peter Robinson, the then deputy leader of the DUP and later to become First Minister in Northern Ireland had been remanded to appear at Dundalk District Court charged with unlawful assembly and assault at Clontibret, Co Monagahn.

Pat writes that around 800 extra gardai were drafted into Dundalk and armed detectives were placed on the roof of the courthouse in town which saw crowds firing petrol bombs and stones.

The murder of Mary McGlinchey, in her Dundalk home as she bathed her two sons in April 1987, and the discovery of the bodies of two of the “Disappeared” are also among the many events captured in Pat’s book.

Pat, concluding his eye-opening, absorbing book, writes: “Due to its geographical position, Dundalk Garda District has often been a very challenging and even dangerous area to serve in.

“Notwithstanding that, like most members I found it a rewarding place to serve the public and I have many good memories along with some sad ones.

“The greater unpredictability of daily policing compared with many other centres in the country made unusual demands on those who served in the area, and often prompted truly courageous responses.

“A significant number of members who have served in Dundalk have been awarded the Scott Medal for bravery, and within Dundalk District five Gardai have lost their lives in the course of duty.

“It is to the memory of those deceased members I dedicate this book.”

Brendan McAvinue, who is the grandson of Civic Guard number two, who also served as a member of the Royal Irish Constabulary and a graduate of the extra-mural certificate course in local history at NUI Maynooth, wrote the Foreword of the book.

He wrote: “Pat draws on his personal memories and experiences and those of former colleagues to describe a catalogue of incidents, often violent and sometimes tragic within the district between the early 1970s and 2015.

“The book, well-illustrated, is a fitting tribute to the bravery and integrity of the members of the Garda Siochana within Dundalk District, particularly those who forfeited their lives in the protection of peace.”

The book is available to buy at Roe River Books, Park St. Dundalk and online at the Oriel Centre, Dundalk Gaol at www.orielcentre.ie.