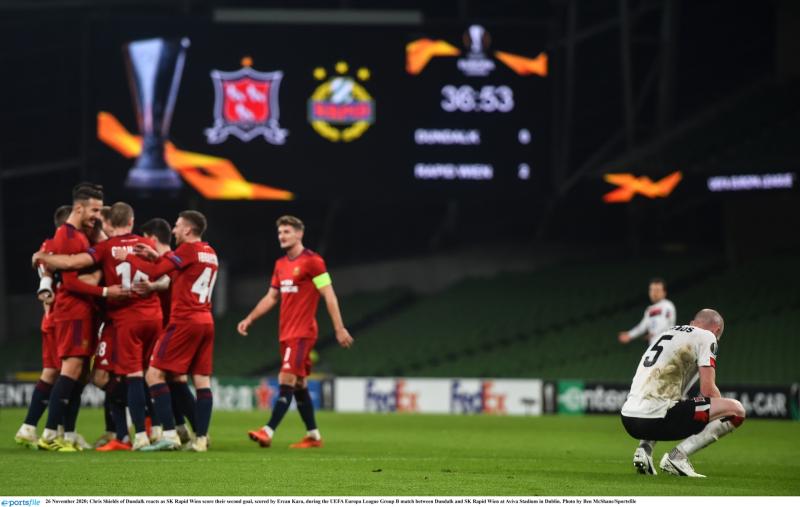 Dundalk FC are all but out of the Europa League after losing 3-1 to Rapid Vienna at the Aviva Stadium on Thursday night, making it four defeats in as many group stage matches.

Knowing they needed a win in order to keep their chances of progression alive, Dundalk shipped three goals – two from Christoph Knasmullner and one from Ercan Kara – before captain Chris Shields added some respectability to the scoreline in the 63rd minute of play.

Dundalk’s preparations for this crucial match were hampered by UEFA’s decision to suspend head coach Filippo Giovagnoli, after he picked up a yellow card in Vienna three weeks ago.

Rapid started brightly and in the early stages, a neat exchange from Filip Stojkovic and Kara down the right preceded a shot by Taxiarchis Fountas, which trickled just wide of the post.

The Austrians were looking much better than they did on their home patch at the beginning of the month, and they deservedly took the lead after just ten minutes had elapsed in Dublin.

Dundalk’s defending left a lot to be desired as Knasmullner found himself in acres of space outside the box before unleashing a shot which flew in past the despairing Gary Rogers.

The visitors went in search of more, and Rogers had to push away a shot from Fountas, while at the other end, Dundalk’s first attempt saw Michael Duffy’s shot gathered by Paul Gartler.

Rogers was on hand to save again when Kara’s free-kick took a deflection off Seán Gannon, with the veteran reacting quickly to tip around the post and keep The Lilywhites in the game.

However, there was little the Navan man could do when Rapid doubled their advantage on 37 minutes, as the unmarked Kara headed home from a Thorsten Schick cross from the right.

The last action of what was a thoroughly disappointing first-half display from Dundalk came when Stefan Colovic, from a Seán Hoare cross, diverted a header well wide of the mark.

Dundalk made a triple-substitution at half-time and the three players brought into the fray – Daniel Kelly, Patrick McEleney and Nathan Oduwa – immediately made their presence felt.

Shortly after the restart, McEleney’s cross was headed over by Oduwa, not long before Kelly was brought down in the box by Mateo Barac to give Dundalk an opportunity from 12 yards.

However, Oduwa’s dreadful penalty attempt was wide of the mark as the game stayed at 2-0.

Dundalk suffered further punishment on 58 minutes, as Rapid got themselves a third through Kara’s superb curling effort that put the game beyond the reach of the League of Ireland side.

The hosts weren’t giving up, though, and Oduwa made some amends for his earlier miss by yielding another penalty, this time after being fouled inside the box by Srdjan Grahovac.

Shields stepped up this time and he made no mistake, sending Gartler the opposite way.

As the game entered its closing stages, Rogers clawed away an attempt from substitute Koya Kitagawa, while Kelly saw his deflected effort saved by the feet of Gartler at the other end.

Deep into stoppage-time, from Duffy’s cut-back, Oduwa somehow diverted over when it looked much easier to score, and that turned out to be pretty much the last kick of the game.