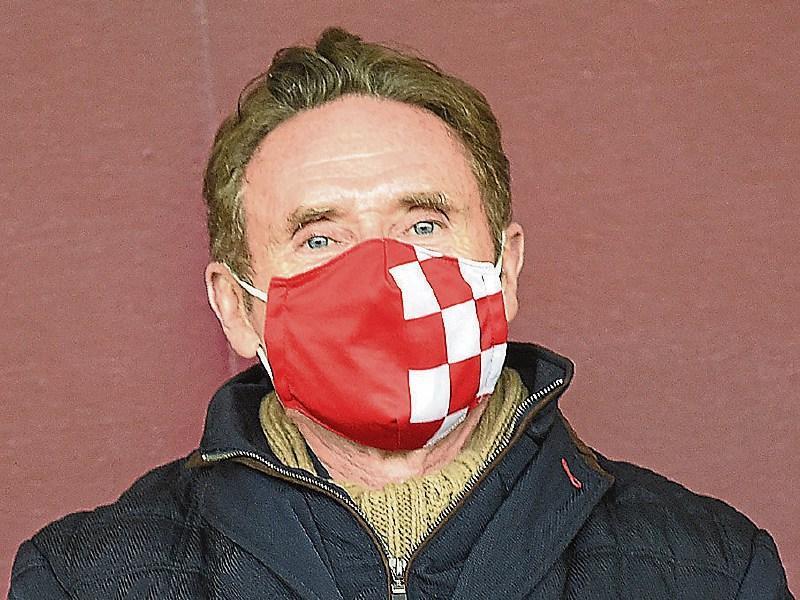 Not only has he delivered a manager out of Louth’s league and someone who every player in the place will want to work with, Mickey Harte, but there are hardened plans for a new stadium which the Tyrone man, hopefully, will guide the Reds into.

All Fitzpatrick needs now is a snap election and his Christmas dinner will be upgraded from turkey to fillet steak.

And sure weren’t the Dubs dropping unflushable bricks last Tuesday morning with word of Harte’s voyage to north Leinster making both the front and back pages of the Herald.

The Ballygawley man refused to be wooed by the capital county’s fortunes some years ago but Fitzpatrick’s charm — idyllically speaking — seems to have been too attractive to turn down.

Back in the real world: why is Harte coming to take charge of a senior team in the pits and an U20 crew that he couldn’t have intimate knowledge of?

The cynic would surmise that inter-county management has become so integral to the Ulster champion’s life that existence deprived of its many rigours and contours was too bleak to merely contemplate.

Harte is 66 and so maybe he views this as a great challenge while he’s still capable? Age may be but a number, though he’s the oldest manager Louth have ever appointed.

Pete McGrath was 64 when handed the reins for 2018, a stint which lasted less than a year. Harte should outlast that tenure comfortably, if only because he’s starting in Division Four where wins ought to come easier than in the second tier, in which McGrath’s Louth struggled.

It could also be argued that Harte has been at the top a lot more recently and longer than McGrath. In the season the Down man was working out of Darver, Harte guided Tyrone to a fourth All-Ireland senior final in his reign.

And there can be no hiding the luring factor of the Errigal Ciaran clubman. Whereas much of McGrath’s triumphs preceded the births of many Louth players, said same panelists will have grown up with Harte as an icon, at the forefront of Gaelic games at the highest level.

Therefore, it’s a given that the first XV he will field in February’s National League will be considerably stronger in terms of personnel than that which Wayne Kierans selected for the championship defeat by Longford.

That, in itself, will almost instantly justify the managerial alteration. Indeed, regardless of how the public construe Harte, his style of football and veilless demands, he will provide a much-needed boost.

INTRICACIES
There are delicate intricacies to be dealt with morally, however. This man is evidently of substance. The manner by which he has widely and bravely spoken about the tragic death of his daughter, Michaela, depicts a truly extraordinary character.

He visibly has a deep faith and places value in traditional practices, players attending mass in unison before matches being just one. McGrath was similar and yet the lads he was training weren’t too pleased to be asked to attend the chapel on a few occasions.

Will Harte’s entry suddenly make them devout Catholics, or will it cause friction among a generation of players whose outlooks are more worldly than that of their parents and elders?

Of course, he hasn’t been hired by the Archbishop, or at least Fitzpatrick hasn’t joined the Armagh Diocese yet, and so the Gospel of necessity will detail the scriptures of Gaelic football, as read by Harte.

Yet it’s worth keeping track of how it develops.

It was interesting to listen three-time All-Ireland winner Philip Jordan speak to Gerry Kelly on LMFM about his former supremo and how he has matured his management style in line with the ever-changing DNA profile of the modern player.

Jordan indicated that Harte enjoyed a much more intimate relationship with his more recent batches of Tyrone soldiers than those of the Moy legend’s vintage.

This was due to the Conor Gormleys, Owen Mulligans and Brian McGuigans of this world having played most of their underage football with Harte at the helm. His contemporary prototypes were naturally more needy and their boss provided. Mattie Donnelly went so far as to donate both of his All Star awards to his No1.

Indeed, the relationship factor appears to be a huge strength of the new Louth boss’s vast repertoire; loyalty, too.

He took much criticism for his providence of a character reference to a former player, Ronan McCusker, in 2013. His ex-Tyrone minor physically and sexually assaulted a woman and was on trial.

Cathal McCarron was another who he stood by in the face of public animosity.

It’s not for your writer to offer a personal view on either incident, but from a strictly GAA sense, what it does prove it that Harte would do anything for his players, past or present, and regardless of the context, that’s a key trait to have.

Therefore, Louth players will know they can trust him and if they reciprocate and pledge their commitment to him in terms of preparation and training, the only way truly is up

LEGACY
It’s believed his remit will extend to dabbling in juvenile structures within Louth, an area which is badly in need of proven guidance.

And how successful he is in terms of this will colour a large portion of his time in the Wee stable.

Paidi O Se brought instant victory to Westmeath having left the Kerry job, taking the men in maroon to Leinster glory in 2004; but, ultimately, the county never built on it. It was short-term work.

Likewise with Mick O’Dwyer in Kildare, Laois and particularly Wicklow. He won Leinster titles with the former pair and took Wicklow on a whirlwind journey, yet, on departing, the situation nose-dived spectacularly.

In either case, was a new generation of talent inspired in a way that would maintain the winning trajectory? Possibly so. Your writer is not in a position to offer a definite insight.

However, even if young lads set their target to play for their respective counties, the framework clearly wasn’t there for them to develop and improve as they both hoped and dreamed of.

At the moment, Louth’s coaching and games organisation is shambolic and unless that’s addressed through action rather than promise and waffle, Harte’s impact will only be for however long he’s here.

There’s not much point in playing Division Two football in a new stadium two or three years from now if in a decade’s time Louth is back in the mire, represented by lads lacking the key ingredients but whose childhood aspirations of wearing the red jersey were conceived by Mickey Harte’s arrival.

This is an excellent immediate solution, a sticking plaster almost, and we can all hope to have many glorious days over the years to come. But there must be an angling towards the post-Harte era too.