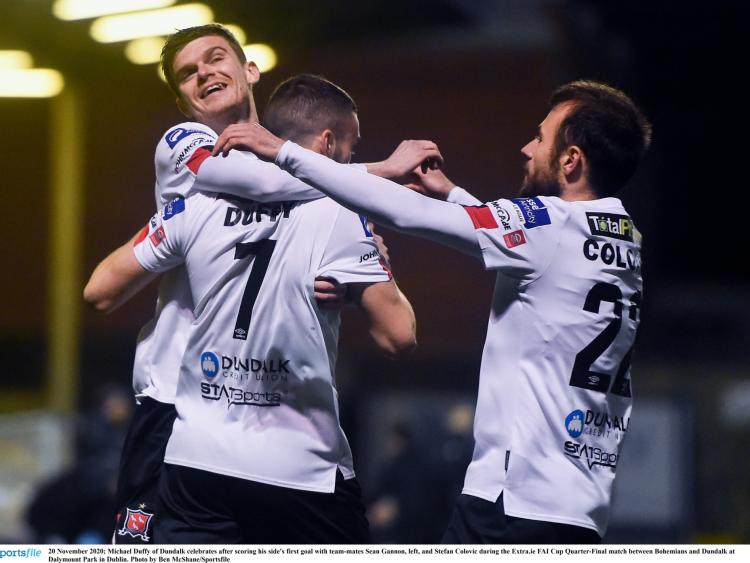 Dundalk FC secured their place in the semi-finals of Extra.ie FAI Cup, courtesy of a comprehensive 4-1 win over Bohemians at Dalymount Park on Friday night.

Dundalk got off to the perfect start inside two minutes when David McMillan poked a through ball into the path of Michael Duffy and he finished past James Talbot, who did get a touch.

Bohs didn’t crumble and they got themselves back on level terms on 15 minutes when Andre Wright converted a penalty into the bottom-right corner after Chris Shields had handled in the box.

The Lilywhites did have chances to go back in front as Shields, from Greg Sloggett’s lay-off, unleashed a piledriver from which Talbot got behind to save, while Republic of Ireland hopeful Duffy saw his low shot from distance kept out well by The Gypsies’ goalkeeper.

Duffy, who would have been in Ireland’s last squad if not for a delay in his paperwork, was causing considerable problems for the Bohs defence and after showing some brilliant skill to get away from a couple of defenders, he was bundled over in the box by Keith Buckley.

McMillan stepped up, and he made absolutely no mistake to make it 2-1 in the 35th minute.
Dundalk doubled their advantage three minutes later when Daniel Cleary played in Cameron Dummigan, who somehow kept the ball in play before crossing for McMillan, who headed home, although television replays certainly suggest that the ball had, in fact, gone out of play.

As the first half drew to a close, Seán Gannon’s cross was headed over by Stefan Colovic, while at the other end, Wright had a header crucially cleared off the line by Andy Boyle.

The second period was something of a slow burner and it wasn’t until the hour-mark that the few in attendance witnessed an effort on target.

It came when Conor Levingston’s long punt found its way to Daniel Grant, but his header was safely gathered by Gary Rogers.

Rogers, who has been subject to criticism from some quarters in recent weeks, went some way to silencing any doubters when he made a fantastic triple-save with 20 minutes to go.

He tipped Dan Casey’s deflected shot over the bar and, from the resulting corner, pushed Evan Ferguson’s header onto the post before once again gathering safely from the rebound.

After that, Bohs were reduced to ten men when Michael Barker was given a second yellow.

That pretty much put an end to any chances of a comeback as Dundalk went in search of another, with both Daniel Kelly and McMillan being foiled by Talbot in quick succession.

Dundalk sealed their passage into the semis three minutes from time when Duffy broke down the wing before finding substitute Nathan Oduwa, who tapped in to score what was his first goal for the club.

Filippo Giovagnoli’s side next face a Europa League game with Rapid Vienna on Thursday night in Dublin, before travelling to Athlone Town in the FAI Cup semi-finals on Sunday week.