Dundalk boss Filippo says he has 'contract in the computer' 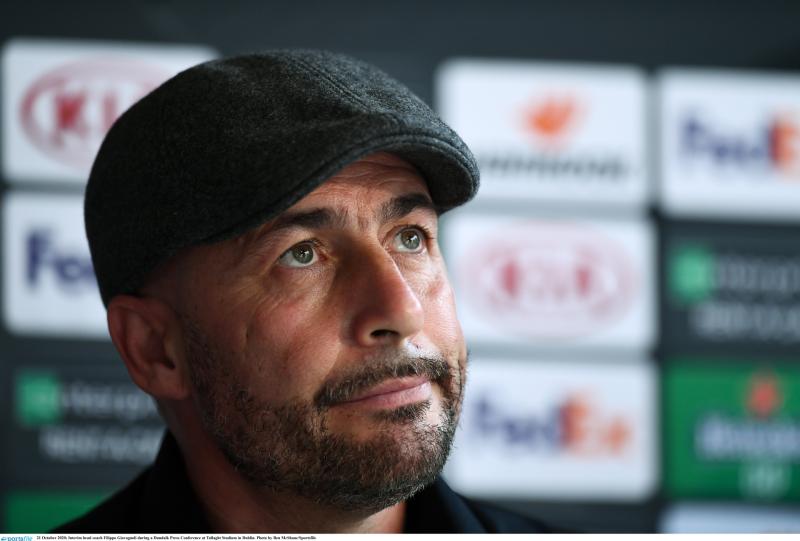 “My own situation is really clear. I have my contract in the computer,” claimed head coach Filippo Giovagnoli when asked whether or not he will remain at Dundalk FC next season.

However, the club’s structure at boardroom level going forward remains a mystery, with a potential Director of Football possibly coming in to work alongside the Italian next year.

“My situation was never the problem,” he said. “There are other things that we are discussing with the club and we’ll see what’s going to happen. I want to help the club to be better and I have an idea what could be, but there is a lot to do and there is a lot to discuss. I am a coach and I can’t make decisions on strategy and stuff. This is not my duty.”

When asked specifically about the thoughts of a director being appointed, he responded: “These are decisions that the club are going to make to see what’s going to be the next structure of the club. I think that can be something that could help in a football structure, but it’s about what the club is going to decide to do.”

A source close to the Democrat confirmed that former Sky Sports reporter Andy Burton, who served as technical director at Dundalk between 2018 and 2019, was in attendance for the recent Europa League game with Arsenal at the Emirates Stadium. However, there is no current indication, at least, that Burton, who departed a similar role with AFC Bournemouth earlier in the year, is in line to return to any such position at Oriel Park in the coming months.

With the majority of the first-team squad out of contract at the end of the current season, Dundalk face an uphill battle to keep hold of some of their key players. Derry City are reportedly keen to bring Michael Duffy back to his hometown club, but will face cross-channel competition. Meanwhile, both Shamrock Rovers and St. Patrick’s Athletic have expressed their interest in Seán Gannon, who has fallen out of favour under Giovagnoli.

“It’s a process that we are talking about,” said Giovagnoli in relation to contracts. “The input comes from the club. I give technical input, but the input is coming from the club and we’re probably going to start to discuss this. It’s going to be more complicated because now, the focus is again on the pitch and on performing, but it’s something that we will need to start to talk about.”

In relation to potential new signings coming into the club for the 2021 campaign, the Italian says that he has already looked at players that could possibly enhance his current squad.

“This is work that I already started one month ago. I’ve started to look at players and understand what can improve this team which is not easy, but it’s possible. First of all, we will need to discuss with our players. You’ve got to be careful with the frustrations because the discussion can be not in the right way because this last result didn’t give us enough of a comfortable mindset to go and talk about contracts.”