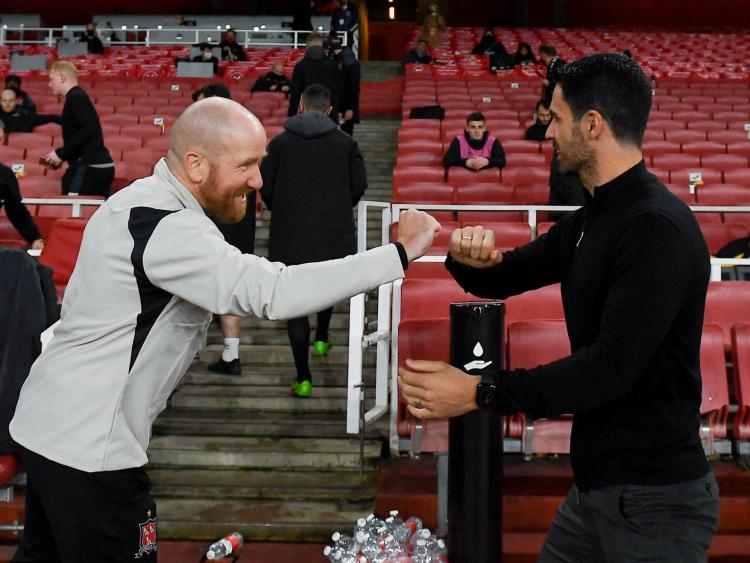 As we enter the twilight of what has been a capricious year for Dundalk, opposition analyst turned first-team coach Shane Keegan has offered his take on what’s been an eventful period.

Keegan moved to Oriel Park at the start of the year, replacing Stephen O’Donnell as the club’s opposition analyst after he departed to take up the manager’s position at St. Patrick’s Athletic. A spate of well-documented changes have since taken place within the club’s management structure, with Keegan moving into the dugout, in a coaching capacity, to support the newly-appointed duo of Filippo Giovagnoli and Giuseppe Rossi in August.

“I’ve absolutely loved it,” Keegan told The Democrat in an exclusive interview. “I initially came in for a very specific role and I was delighted to get involved in that role. The way things chopped and changed, a bit more was looked for from what I could give to the set-up and it was something that I was absolutely more than happy to do.

Those aforementioned changes were spearheaded by the controversial sacking of head coach Vinny Perth following the club’s 3-0 defeat to NK Celje in the first round of Champions League qualifying. He was subsequently replaced by the obscure Giovagnoli, who not only made an extremely positive early impression on the media, but also with Keegan as well.

“When you meet somebody new like that, it really is 50-50 and it could go either way,” he explained. “He could dislike me, I could dislike him, but thankfully we did all click and we’ve been singing off a similar hymn sheet from day one.

“I came up to them on a Saturday morning and that was my first time meeting them. I was juggling the opposition analyst role with my own full-time job at the time, so it was a Saturday before I was able to get up to them. I just got involved and observed training that morning. I thought it was very structured, very organised and there was very clear communication in it.

“We had a chat after that for a while and the boys actually ended up jumping into my car that day and we headed off to watch Derry and Drogheda down in Drogheda. It was interesting to watch them observing a live League of Ireland game for the first time. It was interesting to hear their comments on what they thought of the standard, the style of play and some of the individuals that were on show in the game, so it made that first day really interesting.”

Not even Michel de Nostradame himself could have foretold what would come next, as Dundalk went on to win three straight rounds of Europa League qualifying, which secured their place in the group stages for just the second time ever. And, while Keegan has certainly enjoyed the journey, with the visit to the Emirates Stadium to face Arsenal last month a particular highlight, he insists the squad haven’t at all been unnerved by the challenges.

“The last thing you need to be when you’re preparing for something or when you’re ready to go into battle over something is to be awestruck. Nobody involved in the club at management level or playing level was awestruck or overawed by the occasion that the Emirates presented.

“But, when you are on that plane home or when you have the day off the next day and you’re watching the game back, there is a little bit of a surreal feel to it then. I don’t think there’s anything wrong in saying that you can enjoy the occasion, but at the same time, you don’t ever enjoy getting beaten. I don’t care how much quality the opposition have or who the manager is or who the star players are.

“You don’t ever enjoy getting beaten and watching that game back, while it might have felt surreal, you’re also trying to assess all the things that you did wrong. You’ve got it in the back of your head that we’ve got these again and we’ve got to figure out a way that we can make it tougher on them next time around.”

Dundalk may have excelled on the European stage this year, but domestically, they’ve just ended the league season with a rather dismal 2-0 home defeat to Sligo Rovers, as they finished outside the top two positions for the first time since 2012. And, since Giovagnoli took the reins, The Lilywhites have picked up just three wins from their last nine fixtures.

When asked why Dundalk’s form has been so contrasting in both competitions, Keegan responded: “I think it’s more to do with preparation time. If you take our weekly cycle during that period, and I know to the outside world, it might seem like one day can’t make that much of a difference, but it makes a colossal difference. We’re going from Sunday into Thursday, so if we play on a Sunday, we’ve Monday off and we’re back in Tuesday or game day plus two as we call it.

“Bodies are still not back to where they need to be, so there’s a very limited amount of work that can be done in that Tuesday training session. The Wednesday training session then, you’re able to have a right good go at it and really work on your game plan, really try and get everything nailed down and then you’re into the game again on Thursday.

“But, coming out the other side of that, you’re travelling all through Thursday night and obviously you’ve got to give the players the day off on the Friday, so you’re bringing them in on Saturday which, again, is game day plus two.

“The amount of work you can do on game day plus two is absolutely minimal and all of a sudden, that extra day later where you were doing your really intensive and strategic work, you don’t have that day going from the Thursday to the Sunday, whereas at least you had it from the Sunday going into the Thursday.

“The reality of the situation is that extra day definitely led to us being far more tuned in, prepared and ready for the European games than it did for the domestic games and there’s not a thing in the world we could do to change that cycle.”

Like most of the coaching and playing staff currently at Oriel, Keegan is uncertain as to where his immediate future lies, but the 38-year-old has expressed keen interest in staying on next season. However, the former FC Carlow, Wexford Youths and Galway United boss hasn’t ruled out a return to management in the future, as he continues to enhance his learning.

“I would love to be involved again next season,” he enthused. “I’ve really enjoyed it. Would I say that I have no ambitions to get back into management? Three, four or five years down the road, I would like to think that I might have another crack at it. It certainly won’t be at the level that I’m in at the moment.

“Galway didn’t go as well as Wexford went for me, so I’m under no illusions. If I was coming back into it at managerial level, I would think a mid-table First Division side would probably be the level that I’d be coming back in at, but I don’t mind doing that and rebuild my reputation a little bit again.

“At the moment, I’m absolutely loving being involved at this level and there’s no doubt that this level is a far higher level than I would probably go back in at as a first-team manager.

“If you include the old ‘A’ Championship, where I had two years with FC Carlow, I’ve been a League of Ireland manager for nine years. For want of a better way of putting it, I was making it up as I was going along for a lot of my career.