Dundalk Celtic fans are on the ball for charity fundraiser 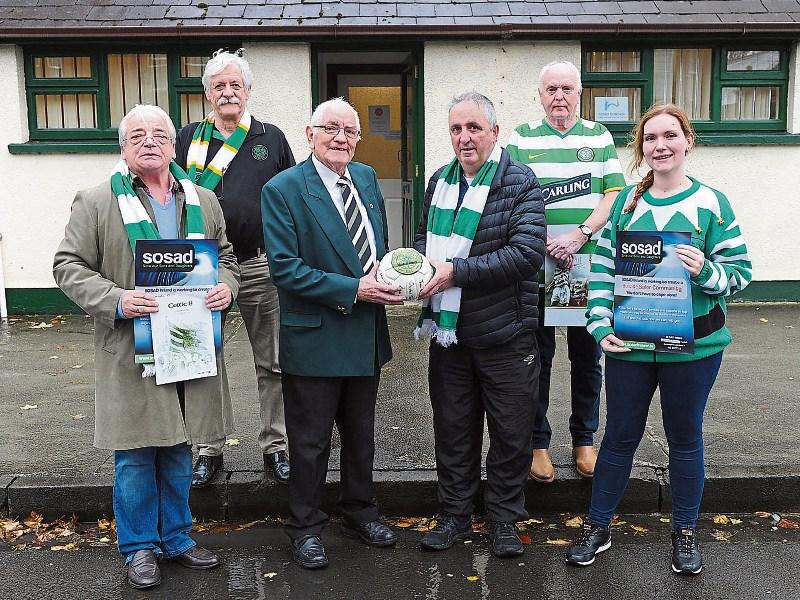 Local Glasgow Celtic fans have donated a football signed by some of the club’s top players to SOSAD to raise funds for the Louth charity.

Life-long Celtic fans Frank Brennan, Liam Gaynor and Dessie Hanks have had the signed ball for more than 20 years after winning the prized possession after cheering their team on to victory against St Johnstone to stop their arch-rival Glasgow Rangers from becoming champions for the tenth time in a row.

The three local men have now donated the ball that is signed by the players including Henrik Larrson to SODAD (Save Our Sons and Daughters) for a fundraising raffle for the charity.

Gerry Duffy, the chairman of SOSAD, said: “In 1998 the three lads headed to Glasgow for the Celtic match against St Johnstone.

“Celtic needed to win the game to prevent their arch-rival Rangers from becoming champions for the tenth time in a row.

“It was a very important game that went down in history.

“There were five signed balls as prizes in a raffle for fans after the game and Frank, Liam and Dessie were lucky enough to win one or them.

“After their team winning the game and them getting the signed ball there was plenty of celebrating done by the lads.

“I am sure that there were more than a few 7ups drunk that night”, Gerry joked.

“It was lucky with all the celebrating that they managed to keep the ball safe and get it home.”

Not only did they get the ball back to Dundalk safely they have looked after it for over 20 years, and are kindly donating it to SOSAD for a fundraising raffle.

And now one lucky soccer fan will be in with a chance of winning the signed Celtic ball.

Gerry said that the raffle, which is sponsored by PMK Civil Engineering, will be launched shortly.

“We are so grateful to the lads for donating the ball to us and to PMK for sponsoring the raffle”, he said.

“PMK in Glasgow, owned by Paul and Kevin Docherty and Paul O’Brien, have been so supportive of SOSAD over the years and we really appreciate it.

“The raffle will be nationwide, and it will go online so people anywhere in the world can enter.

“There will be a lot of people wanting to get their hands on this signed ball.

“Another local man Bernard Grey has also donated old Celtic programmes to us to be included in the raffle.”

Gerry said the generous donation of the signed Celtic ball is very much needed to raise money for the local charity due to the Covid-19 pandemic putting a stop to fundraising events.

“Unfortunately, the pandemic has been tough for a lot of people and for some their mental health is deteriorating in the current situation.

“We have been able to keep going throughout the restrictions and keep our 24 helpline up and running.

“But the restrictions have affected our usual fundraising events, so we are very grateful to be given this signed Celtic ball to raffle.”

Anyone who wishes to donate to SOSAD can do so online or in their Dundalk office on Jocelyn Street.