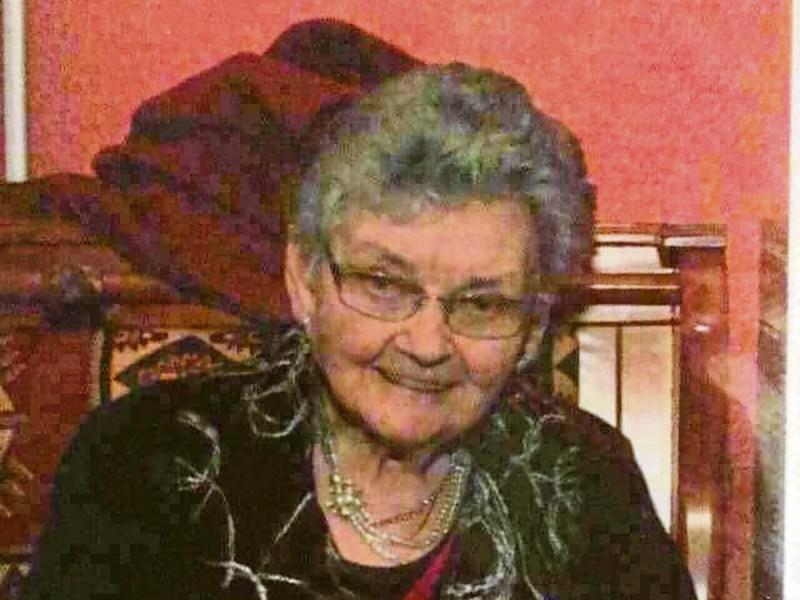 Katherine (Kitty) Kerley (nee O’Sullivan) was born on the 10th of November 1924 in Clongeel, Newmarket, Co. Cork in the parish of Boherbue.

Katherine was the second eldest of the family of Daniel O’Sullivan and Bridget O’Sullivan (nee Goulding). Along with the rest of her family, Katherine attended Druminargle School. This school was later made famous in “To School Through the Fields” by Alice Tailor. Katherine fondness for her childhood was similar to Alice Taylor’s idyllic account of her own childhood in her writings. The traditions and values of “Decency and Honesty”, Katherine witnessed and learnt from her family and her neighbours, were the cornerstones of her life. However, nostalgia withstanding, hardship was a major factor of growing-up in the 1920’s and 30’s in rural Cork.

Katherine started work at 13 years of age; 12 hours a day; 7 days a week for; £1/ month, the money was sent home to help raise the younger children. No matter how hard life was at that time Katherine never looked back with any bitterness.

Katherine emigrated to San Francisco in 1953 to join her sister Ellen that left the previous year. Katherine’s airline ticket cost $360 (at a time the exchange rate was $3/£1). Soon after she met her future husband Pat (Paddy) Kerley from Reaghstown, Ardee, Co. Louth. They subsequently got married in 1956 and had 5 children John, Danny, Annetta, Bridget and Patrick. Tragically their second son Danny died in 1963; aged only 5 years old; of a rare terminal kidney cancer.

Katherine nursed her husband Pat after he suffered a number of heart attacks in 1969 and in the early 70’s. They then made a major decision to move to Ireland, with the family in September 1973. Katherine had another major move to deal with, as she was not moving home to familiar surroundings of Co Cork but to Co. Louth where her husband came from. This was another tough adventure for her, albeit with her family around her. To plant roots; make friends and build another home for her husband and family. Again, Katherine’s resilience and determination to make everything easier for her family shone through. Initially moving to Blackrock Co, Louth, and then moving to Mullenstown, Ardee in March 1975 and remaining there until her death on the 15th August this year. Katherine was a proud Cork woman, but she loved her home in Co, Louth. The friends and people she got to know in Co Louth she would not trade under any circumstances. Katherine lived almost half her life and longer than anywhere else in the “Wee county”.

Soon after settling-in Katherine helped her husband rebuild the rural public house in Reaghstown that was burnt-down while they were in the USA. “The Danny Boy” was opened in April 1981. “The Danny Boy” hosted many famous nights in the Bar and Lounge. Customers travelled from near and far to socialize with Craic and Ceol! Katherine was ever-present in “The Danny Boy” throughout all the years, happiest witnessing everyone enjoying themselves! Young and old always looked out for her friendly smile and laughter. Her good humour and gregarious spirit transferred to all in her company.

Centre to Katherine’s life was her family. She was a sister, wife, mother, grandmother, aunt and grandaunt. All of her family; her children, grandchildren and daughters-in-law have nothing but fond, warm and loving memories of her generosity and kindness. Sadly, Katherine’ husband Pat died in 1988. Prior to his death, Katherine nursed him after he was diagnosed with Lung cancer

To her extended family she was The Matriarch. She received full respect for all kindness and goodness that she exuded over her lifetime. This was displayed when family from all over Ireland and overseas arrived at her 90th birthday party in November 2014. Together, with neighbours and friends, a fantastic evening (or more accurately long-night) of food, music and fun ensued.

This love, generosity and kindness was repaid to Katherine over the last few years of Katherine’s life. Especially, by her daughters Annetta and Bridget who cared for her at home through a long and arduous illness that prevented her from going-out for the last few years.

Katherine left Cork in 1953 but Cork never left her. She was a proud Cork woman. She never forgot where she came from. She cherished travelling to Cork over the years to visit her brothers Eugene and Stephen, her sisters Mary (all lived in the homestead in Clongeel); Brid O’Loughlin and Lizzie Hickey and her extended family. Her sister Lizzie and subsequently, her niece Hannah O’Keefe posted-up “The Corkman” to her every week, so she could keep abreast with the news in her native area. Anytime Cork was in an All-Ireland final (hurling and football) she would wear her Cork jersey to mass and The Danny Boy that night, celebrating any victories and applauding “my boys” and if they were defeated; explaining “they did their best” and “Up Cork!”. Katherine had the pleasure of a visit in The Danny Boy from the Cork Football team soon after her 90th birthday in 2015, when the Cork team was training and staying locally on the way to play Tyrone in a league game the following day. Each one of the team and crew shook her hand, posed for photographs and made “one-of-their-own” a very proud lady

Katherine was a lady of strong faith, always attending mass wherever she lived. She had a particular devotion to The Blessed Virgin Mary. The Rosary was one of her regular prayers and she always had “A May Alter” on display complete with flowers and a statue of Our Lady.

Many believe it was no coincidence she passed away on the Feast of The Assumption the 15th of August and her funeral and subsequent burial was on the 17th August which is new Feast Day of Our Lady of Knock. Katherine visited Knock shrine many times in her lifetime.

No words can explain the goodness and kind deeds Katherine carried out in her lifetime. Katherine was a friend of many. Anyone who experienced her hospitality will give testament to her always giving. No one left her house either hungry or thirsty. She would feed “an army”; only happy serving. Katherine often brought Christmas dinners to less fortunate individuals; to ensure they wouldn’t go without. Katherine left food hampers and provisions to many at the time of bereavement and other difficult times.

Only two of Katherine’s siblings survive her; Hannah Flynn and Julia Dwyer (both USA). Both came to live with Katherine and her husband Pat in San Francisco when they first came to America.

Katherine’s immediate family namely John (USA) Annetta, Bridget and Patrick, daughter-in-law’s Ellen (USA) and Jane; grandchildren Danny; Pat and John (all USA) and Patrick, Katie, Rachel and Clodagh would all like to thank all the messages of sympathy; condolences kind thoughts received from friends and family near and far. It would be impossible to thank everyone who helped whilst Katherine was ill and with all the funeral arrangements.

The greatest thanks and gratitude is deserved for Katherine’s life; who truly left a mark on everyone who knew her, met her and loved her.

No one really knows what happens after our loved ones pass on, but the image of Katherine arriving through “The Pearly Gates” wearing her Cork Jersey with all her family and friends, that passed before her, welcoming her and applauding her as she moves along; while waiting for her at the top of the queue is her husband Pat and her son Danny, is an image we all would love to be realised.