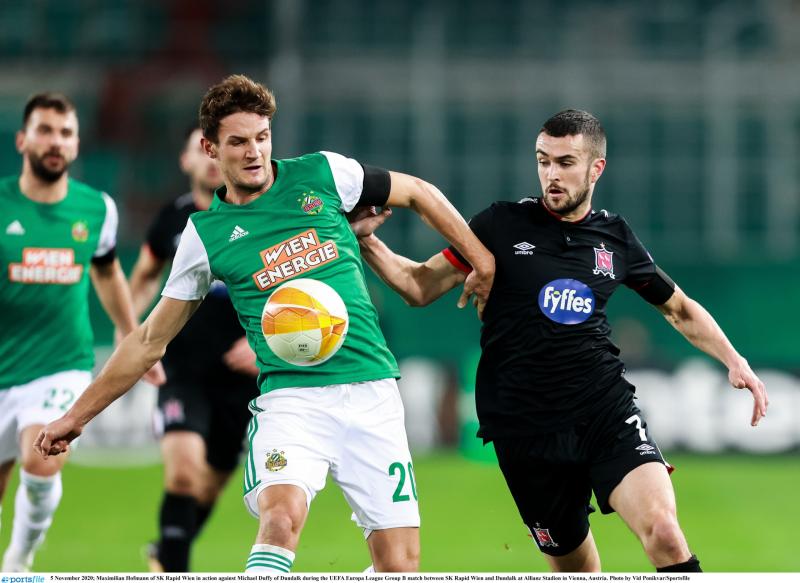 Dundalk FC produced another admirable display in the Europa League group stages tonight as they bravely went down 4-3 to Rapid Vienna in what was an enthralling game in Vienna.

Rapid were favourites coming into this match, but the first chance of the night fell to Dundalk, as Jordan Flores floated a free into the box that was headed well wide by Patrick Hoban.

That was shortly before The Lilywhites took a shock lead on eight minutes when the imperious Chris Shields sprayed a ball into the box which was turned home by the head of Hoban, although Rapid Vienna goalkeeper, Paul Gartler, really should have kept it out.

Following that ‘rapid’ start from Dundalk, the Austrians upped their tempo and almost equalised when Christoph Knasmullner flashed a header wide from Thorsten Schick’s cross.

Rapid did draw level on 22 minutes, however, when their captain, Dejan Ljubicic, found himself in space before unleashing a truly unstoppable shot which flew in past ‘keeper Aaron McCarey.

Dundalk had to absorb some inevitable Rapid pressure after that, but they were looking dangerous on the break and should have regained their one-goal lead on the half-hour mark.

Shields done brilliantly to win the ball in defence before finding Flores and he played a pass into the path of Michael Duffy, but he took one touch too many as Gartler saved with his feet.

McCarey, who was making his first ever appearance in European competition, produced an excellent save from Ercan Kara just before the half-time break as the sides went in level.

The second half turned out to be just as entertaining as the first and Hoban’s dinked pass found Duffy in acres of space out on the left, but he fired his effort into the side-netting.

At the other end, Mario Sonnleitner’s header was saved by the outstretched arm of McCarey, and the Monaghan native had to save again moments later, this time at the feet of Demir.

Rapid took the lead when Maximilian Ullmann’s long ball was kept in by Schick, and his cross was kept out by McCarey, but only as far as Kelvin Arase, who scored with a diving header.

Dundalk weren’t behind for long, though, and substitute David McMillan was brought down in the box by Sonnleitner following some good work from another substitute, Nathan Oduwa.

McMillan, who had never before scored in the Europa League group stages, then stepped up to convert from 12 yards, despite Gartler guessing correctly and even getting a hand to it.

Dundalk fell behind again three minutes from time, however, when Filip Stojkovic’s cross was met by the head of Maximilian Hofmann and he got the beating of McCarey, who had come early.

With the visitors now stretched, Yusuf Demir compounded their misery in the final minute of normal time when he drilled a shot into the bottom corner to seal the points for Rapid.

But, here was still time for yet more drama in what was a pulsating encounter, as Oduwa’s trickery yielded another penalty, this time from Stojkovic, deep into stoppage-time.

McMillan stepped up again and he sent Gartler the wrong way to make to peg it back to 4-3, but it was too little, too late for Dundalk as the final whistle blew directly after that goal.