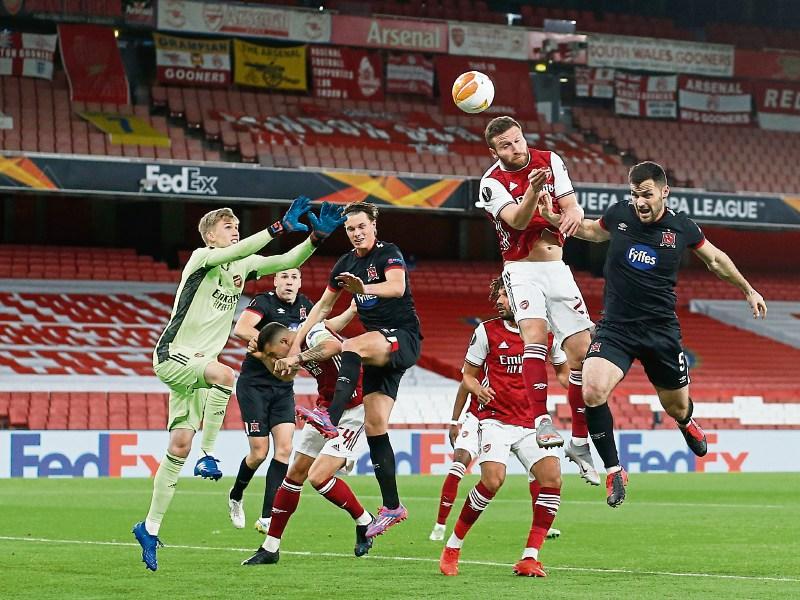 Having already encountered Molde and Arsenal in this season’s Europa League group stages, Dundalk FC next face Rapid Vienna at the Allianz Stadion this coming Thursday at 5.55pm.

Both sides head into this matchday-three encounter on zero points in Group B and will face each other once again on matchday-four on November 26th at the Aviva Stadium in Dublin.

Molde, who have maximum points so far, will still be underdogs going into their double-header with group leaders Arsenal on the same dates, meaning that either Rapid or Dundalk have an opportunity to get themselves back in contention over the next two group games.

Rapid went down 1-0 to Molde in Norway last week, while on matchday one, they took the lead against Arsenal in Vienna, but ultimately lost 2-1 to the English Premier League side.

That loss against Arsenal was Rapid’s first home defeat in the Europa League group stages since 2012 – a statistic which serves as an indication as to the gravity of the challenge at hand when Dundalk makes the trip to face the side that finished second in the Austrian Bundesliga.

Although they are historically the biggest club in Austrian football, the last of Rapid’s record haul of 32 league titles came in 2008. Since then, the league has been dominated by the wealth of Red Bull Salzburg, who have now won the domestic title seven years running.

Rapid will be a more than familiar name with European football anoraks, having competed in the inaugural European Cup competition in 1955. Rapid have since played close to 300 games in UEFA competitions, but this will be only the second time they have faced League of Ireland opposition, having recorded a 5-0 aggregate win over Shamrock Rovers in 1964.

The closest Rapid have come to European silverware was by twice reaching the final of the Cup Winners’ Cup, losing to Everton and Paris Sant-Germain in 1986 and 1996 respectively.

Rapid’s class of 2020 entered this season’s Champions League and defeated NK Lokomotiva of Croatia 1-0 before being eliminated in the third qualifying round by Belgian side KAA Gent (1-2), thus entering the Europa League group stages for the eighth time in their history.