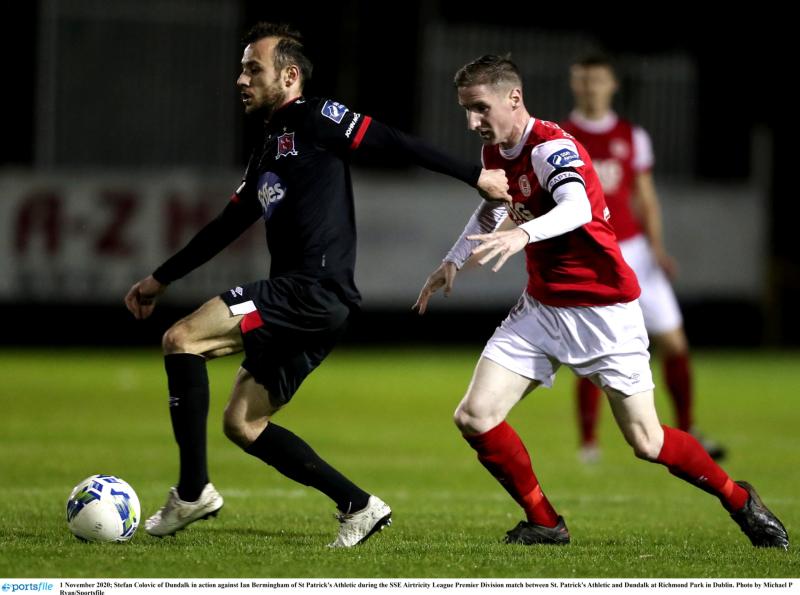 Dundalk FC are making life difficult for themselves in the battle for Europe, as they played out a 1-1 draw with St. Patrick’s Athletic in what were treacherous conditions in Inchicore.

As was the case when these sides last met at Oriel Park in the league back in July, Patrick Hoban had put Dundalk ahead before ex-Lilywhite Robbie Benson drew level for The Saints.

The result means that Dundalk go into their final fixture against Sligo Rovers at Oriel next Sunday needing a win to secure their place in the inaugural Europa Conference League.

However, because of their superior goal difference, it is likely that a draw in that game would be sufficient, but it doesn’t take away from what was yet another lacklustre domestic display.

The previous Thursday night’s game with Arsenal at the Emirates Stadium may have been broadcast in all four corners of the globe, but in the context of next season, this league fixture against another team in red and white, St. Pat’s, was of considerably greater importance.

That is because Dundalk knew that three points would guarantee them European football for the eighth consecutive year in 2021 and they had a promising enough start at Richmond Park.

Daniel Cleary saw a shot go miles wide of the target, while Darragh Leahy’s cross was punched away by Brendan Clarke and into the path of Chris Shields, who also fired wide.

At the other end, Billy King showed some decent skill to beat the challenge of Cleary and Brian Gartland, but the former Rangers forward had his attempt foiled by Gary Rogers.

That was quite a let-off for Dundalk, who then took the lead on 23 minutes after Stefan Colovic’s cross was kept in at the far post by Leahy before being turned home by Hoban.

Stephen O’Donnell’s side, who are desperately trying to avoid having to contest a relegation play-off, created a couple of really good chances to draw level before the half-time break.

Jordan Gibson looked certain to score when he rounded Rogers, but with the goal gaping, the English striker that was signed from Bradford City last winter somehow hit the side-netting.

Not long after that, Jamie Lennon’s corner was nicked off Luke McNally by Shields, but only as far as Rory Feely, who drilled his effort wide as Dundalk went in at the break 1-0 ahead.

St. Pat’s did find themselves a deserved equaliser on 64 minutes when Lee Desmond’s cross from the right was headed home by Benson, who once again scored against his former club.

Both teams went in search of a winner and from Hoban’s pull-back, Michael Duffy had a shot deflected over and at the opposite end, Chris Forrester unleashed a shot which was wide.

The last chance fell to Dundalk eight minutes from time when Hoban played in David McMillan, but Clarke got down well to save as the two sides settled for a point apiece.