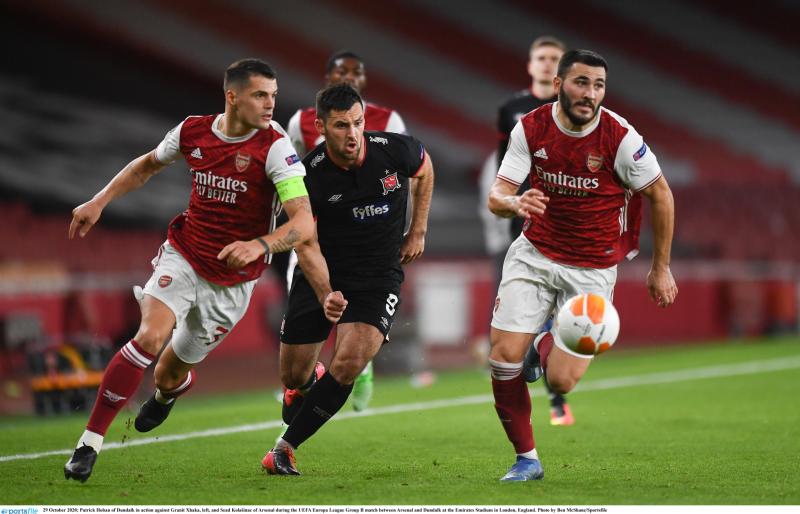 A courageous Dundalk FC suffered a 3-0 defeat to Arsenal in the Europa League tonight.

Goals from Eddie Nketiah, Joe Willock and Nicolas Pepe in space of five minutes either side of half-time killed off the brave challenge of Filippo Giovagnoli’s side at the Emirates Stadium.

Things had started brightly for The Lilywhites, who had the first chance of the night when Michael Duffy found Patrick McEleney in space and his speculative shot from had to be pushed around the post by Runar Runarsson, who was making his debut in goal for Arsenal.

As was always likely to be the case, Dundalk had to soak up a serious amount of pressure from the English Premier League side, who dominated proceedings after that McEleney chance.

Pepe was causing some considerable difficulties for the visitors and his ball bounced off Daniel Cleary and into the path of Cedric Soares, who blazed miles over the crossbar.

Ivory Coast international Pepe, who cost just under €80m a year ago, curled an effort wide before Arsenal’s club record signing headed over from Sead Kolasinac’s cross from the left.

Arsenal had more chances after that and Mohamed Elneny teed up Reiss Nelson, who rifled a shot just wide of the mark, but Dundalk goalkeeper Gary Rogers appeared to have had the shot covered.

The Gunners were, at this point, beginning to turn the screw and Willock got the better of a few Dundalk defenders before crossing for Kolasinac, but the Bosnian defender headed over at the far post.

Rogers had to get down to save from Willock’s shot, while Nketiah somehow missed the target from close range when the ball bounced kindly for him after Dundalk had failed to clear.

Dundalk’s resistance was finally broken three minutes before the half-time break when, after Rogers failed to collect from a corner, the ball broke to Nketiah, who simply couldn’t miss.

Arsenal made it 2-0 when Nketiah seized on a loose pass from Cameron Dummigan before playing it into Pepe, whose attempt was deflected into the path of Willock, who subsequently converted into the roof of the net.

Just one minute into the second half, Arsenal made it three when the outstanding Pepe received the ball from Willock before curling into the top corner to score a sensational goal.

Dundalk’s game plan had swiftly turned into a damage-limitation exercise and, to their credit, they restricted Arsenal to very few chances after that devastating spell.
Ainsley Maitland-Niles’ shot which was saved by Rogers was their best attempt following that three-goal blitz.

Patrick Hoban’s free-kick which was well wide of the mark was the closest Dundalk came to grabbing a consolation goal as the attention switched to league matters against St. Patrick’s Athletic on Sunday.