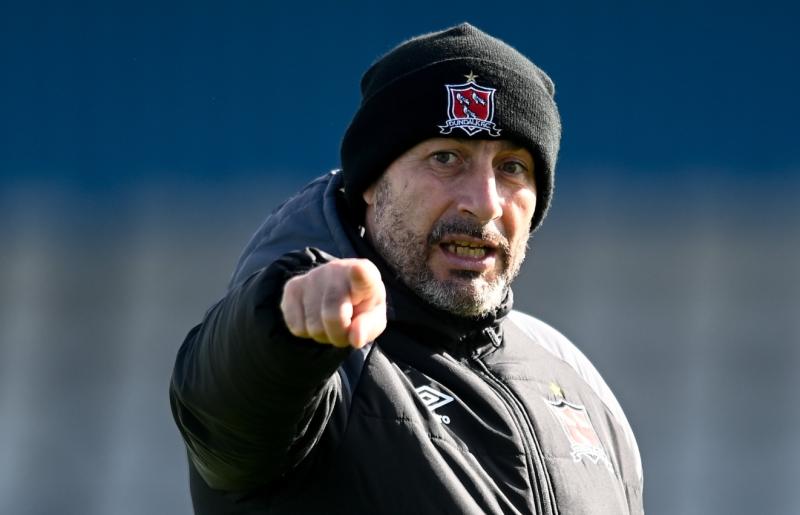 Filippo Giovagnoli says that Dundalk FC will now be putting their full focus on SSE Airtricity League matters after suffering another disappointing result on Sunday afternoon.

A 1-0 win for Waterford brought them to within a point of The Lilywhites, who currently occupy third.

With a game in hand, Dundalk know that one win from their remaining two fixtures would likely guarantee a place in the inaugural Europa Conference League next year.

“I am disappointed, but I am not disappointed with the performance,” said Giovagnoli after the defeat at the RSC. “In the first half, we controlled the game, but the focus wasn’t one-hundred percent here. We are distracted by other situations from the Europa League and stuff.

“It’s normal, but this is something that we have to make better because we’re going to have another two weeks that are really important for us and I’m referring to the league – this is our focus from now.”

Dundalk’s head coach believes their Europa League exploits has had a negative affect on their domestic form and admitted his players are struggling for focus on the domestic front.

Giovagnoli’s comments seem to suggest that Thursday’s game with Arsenal will be treated as a free hit, with next Sunday’s league game against St. Patrick’s Athletic being prioritised.

“I am disappointed because we are distracted with all these big games, but I can’t blame anybody because all the environment is distracted by this trip to Arsenal, so it’s not just about the players – it’s everyone. It’s a big game, but for the league, it’s a problem because if we started to think about Arsenal yesterday or two days ago then it’s normal that you can have some problems performing in a league game.”

At the time of writing, Dundalk have no fresh injury concerns heading into Thursday night’s game at the Emirates Stadium with Nathan Oduwa the only player deemed to be doubtful.

Dundalk’s arduous schedule forced Giovagnoli to make six changes to the starting line-up on Sunday – something that’s been a key feature of Dundalk’s league matches in recent times.

“We are managing all the squad. We are having players tired and we are managing minutes with the medicals. We try to rotate to avoid big injuries – we have some minor ones. But still, we have people that need to rest.

“Even today, I had people that I can’t play because they need to rest, but it’s not about excuses. Now is about work, staying organised like we did at the beginning and staying focused on objective that we have to achieve. Before, it was the Europa League play-off. Now, it’s the league.”