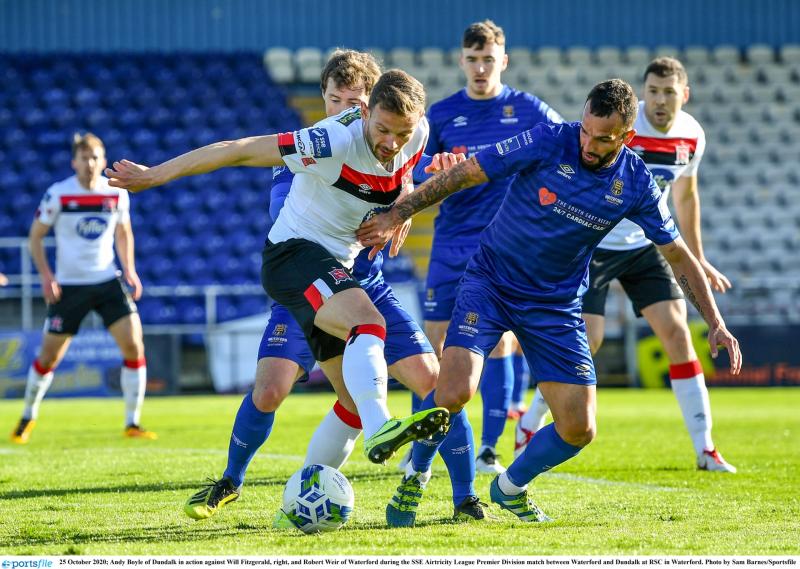 Dundalk FC suffered yet more disappointment in this season’s SSE Airtricity League on Sunday afternoon as they went down 1-0 to Waterford at the Regional Sports Centre.

John Martin’s second half goal was all that could separate the sides as Waterford moved to within just a single point of third-placed Dundalk in the battle for European qualification.

Dundalk had the better of what was a cagey opening at the RSC and their best chance of the first half came as a result of what was a neat exchange between Jordan Flores and Michael Duffy. Flores then cut it back to Duffy, whose shot was well kept out by Brian Murphy.

Knowing a win would all but guarantee European qualification for next season, Dundalk dominated possession for the remainder of the half, but struggled to create anything of note.

Instead, it was Waterford who had the game’s next big chance when the energetic Martin had caught Chris Shields in possession. Martin then put Daryl Murphy through on goal, but his attempt trickled agonisingly wide of the post – cue a huge sigh of relief from The Lilywhites.

The ex-Republic of Ireland international again tried his luck on the stroke of half-time, but his turn and shot was straight at Aaron McCarey, while at the other end, Flores fired over.

Seán Murray headed wide from Stefan Colovic’s corner in what was the last act of the half.

Dundalk started the second half in positive fashion and, from John Mountney’s cross from the right, David McMillan’s header was gathered easily by Barry Murphy and just a minute later, McMillan was again threatening, this time blazing a shot over the top from distance.

However, it was Waterford who took the lead on 57 minutes after Dundalk had failed to clear their lines from Ali Coote’s free-kick. The ball broke to Will Fitzgerald and his cross from the left was headed home by Martin, who rose highest to give the hosts a priceless 1-0 lead.

Waterford should have doubled their advantage when, from Brian Murphy’s long kick-out, Dundalk were caught napping and McCarey had to save brilliantly from close range to deny Daryl Murphy, who had looked certain to score his first goal since returning to Irish shores.

The Lilywhites did have chances to equalise late on, most notably when the ball broke kindly to substitute Patrick Hoban, but his flashed shot across goal sailed inches wide of the post.

Hoban again had an opportunity when he headed well over from Duffy’s corner, and that was indeed Dundalk’s last chance as they succumbed to their fifth league defeat of the season.