Dundalk lose out to Molde in Europa League opener 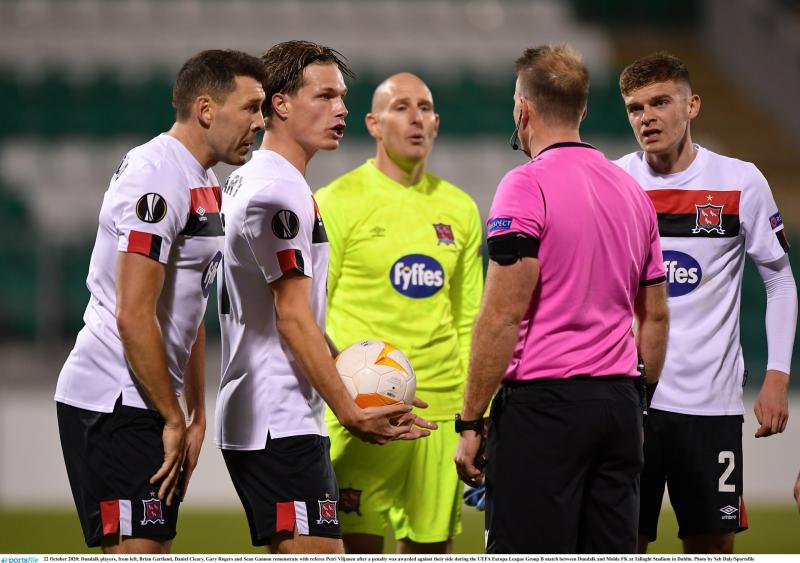 Dundalk FC have got off to a losing start in the Europa League group stages in unfortunate circumstances after going down 2-1 to Norwegian champions Molde FK at Tallaght Stadium.

In what was a game of two halves, Dundalk had the better of the first and took a deserved lead into the break via Seán Murray’s headed goal – his third in as many European matches.

However, the League of Ireland champions were second best after that as Molde came from behind to win the contest, courtesy of Etzaz Hussain’s volley and Ohi Omoijuanfo’s penalty.

In the pre-match build-up, Filippo Giovagnoli called on his players not to let their nerves get the better of them, and the Dundalk head coach would have been pleased with his side’s start.

The Lilywhites exhibited no shortage of positivity and confidence early on and they had the game’s first attempt when John Mountney drilled his low free-kick well wide of the mark.

Dundalk had the ball in the net on 24 minutes after Michael Duffy’s cross was headed away by Kristoffer Haugen, but only as far as Patrick Hoban, who finished.

That decision certainly looked an extremely harsh one, and it appeared to have awoken Molde, who then began to get themselves into the match following that scare.

Hoban’s headed clearance from Magnus Wolff Eikrem’s corner went only as far as right-back Marcus Pedersen, whose rasping shot from about 30 yards out swerved inches wide of the post.

Dundalk weathered that short spell of pressure and took a deserved lead on 35 minutes after a nice combination between Seán Gannon and Mountney allowed the latter to whip in a sensational cross which was headed home by Murray, who had gotten away from his marker.

The second half provided a much different story, however, and for Dundalk, it was pretty much backs against the walls for the majority as the Norwegians began to assert more authority after what manager Erling Moe described as a ‘disappointing’ first half display.

Mathis Bolly had a chance, but his shot was deflected just over by teammate Stian Gregersen.
The Norwegians did find their equaliser on 62 minutes when the impressive Pederson’s cross from the right was – with the helpful aid of a Gannon deflection – volleyed home by Hussain.

Things went from bad to worse for Dundalk nine minutes later when Erling Knudtzon, who was only off the bench, was brought down in the box by Gannon and a penalty was awarded.

Molde could have extended heir lead when Hussain drilled a shot wide, while Knudtzon’s cut-back was diverted well over by Omoijufnao. Dundalk threw the kitchen sink at Molde in the dying embers, but couldn’t fashion an equaliser as Moe’s side collected all three points.