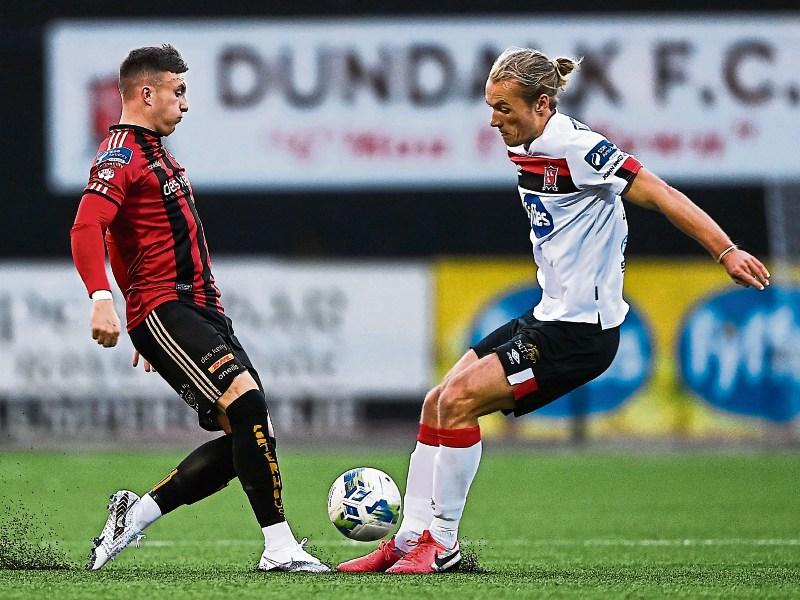 Greg Sloggett will make his first foray into Europa League group stage football this Thursday as Dundalk FC welcomes Molde FK to Tallaght Stadium in their opening match of Group B.

Sloggett, who signed for Dundalk last November from Derry City, had never before played in European competition prior to joining The Lilywhites, but was named in the starting line-up for all three of their games in Europa League qualifying this season.

The 24-year-old Meath native is now looking forward to joining some of Europe’s elite in the tournament phase.

“It wasn’t group stages, but it was nice,” he said. “I’ve a few European games, but to play in the group stages – it’s a perfect group. I don’t know if they are manageable ties. Hopefully, we can take points and compete in the group, but we’ll soon see with Molde. That’s the first big important game.”

In order to pick up points in a pool which also includes Arsenal and Rapid Vienna, Sloggett admits that Dundalk will need to be more incisive in their approach than they had been in qualifying. He also sees the wings as a potential area where they can exploit their opponents.

“I think you saw how effective we were with the pace of Mickey (Duffy) and Dicky (Daniel Kelly) on the flanks, particularly against Klaksvik and Sheriff,” continued Sloggett. “Teams that come and want to play will give everyone space on the pitch, but everyone is different. We need to be better at breaking teams down because it might be like that if a team is down to ten men. Molde will come here and take the game to us.”

Sloggett is one of 15 players in the current squad that weren’t at the club for their last group stage campaign of 2016. Glittering images of Dundalk’s various successes in recent times currently decorate the walls of the training centre and that’s something he believes has motivated the newer members of the panel, who dream of replicating those achievements.

“When I signed for this club and looked around, I was immediately impressed. You’re in there pumping iron as they say, you see their achievements and I want to replicate that more than anyone. Hopefully, we can do ourselves justice in the group. Getting there is an achievement in itself and we can take great pride in that. It’s a great achievement even if it is the only thing we do this year. I’ll look back on 2020 with fondness even if it’s all we do.”