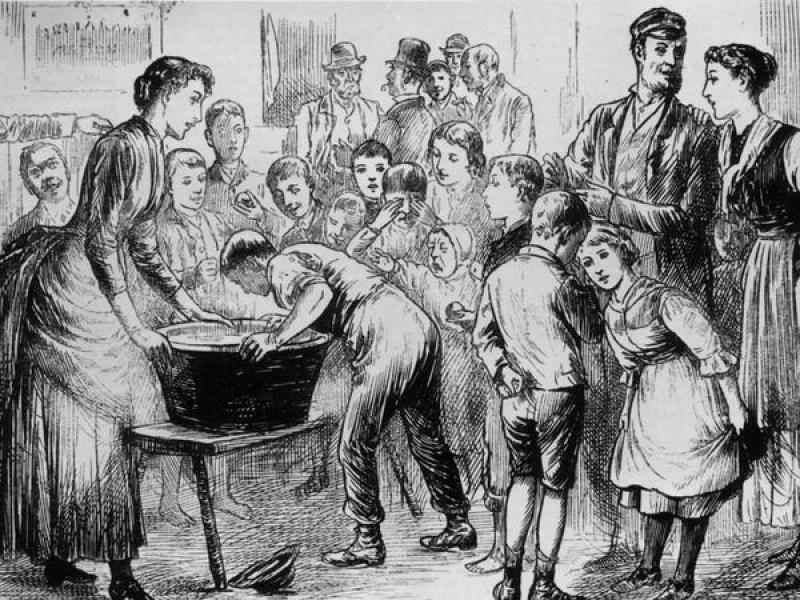 The way that Hallowe'en was celebrated in Dundalk in the middle of the 19th Century is recorded in notes written by Redmond Magrath, a noted local antiquarian whose family ran a footwear business at 53/54 Clanbrassil Street for over 150 years.

Writing in Tempest's Annual of about 1930, under the heading 'Dundalk in the 1860s' at 'Hallow Eve' (as he calls it) --- The streets about our house (in Clanbrassil Street) was crowded with apple stannons and large heaps of apples on sacks, stuffed with straw on the roadway. The trade in apples was very great. There was John and Pat Kearney, Nelly Goodman and apple dealers from Crossmaglen and other towns. The crowds around the stannons would block the street. Apples seemed to be very plentiful and cheap.

The whole (apple) trade seemed to be carried on in our locality. The stannons would be lighted up with candles in lanterns and continue up to eleven o'clock at night.'

The author goes on to state that were 'Gooseberries stannons, where berries were scooped into a large tin vessel of about a quart, that seemed to be overflowing but --- 'The quart (vessel) would be half-filled with paper and you would only get half the quantity which you expected.'

He also says that there were 'hot pea stannons' but does not state if the same tricks were played there on the customers.
I'll bet there would be a few rows over those sort of transactions!

He does not explain what 'stannons' were but I believe there were covered stalls that could be moved after trading hours; just like the ones that used to be set up at the Courthouse Square on Market and Fair days in Dundalk up until the middle of the last century.