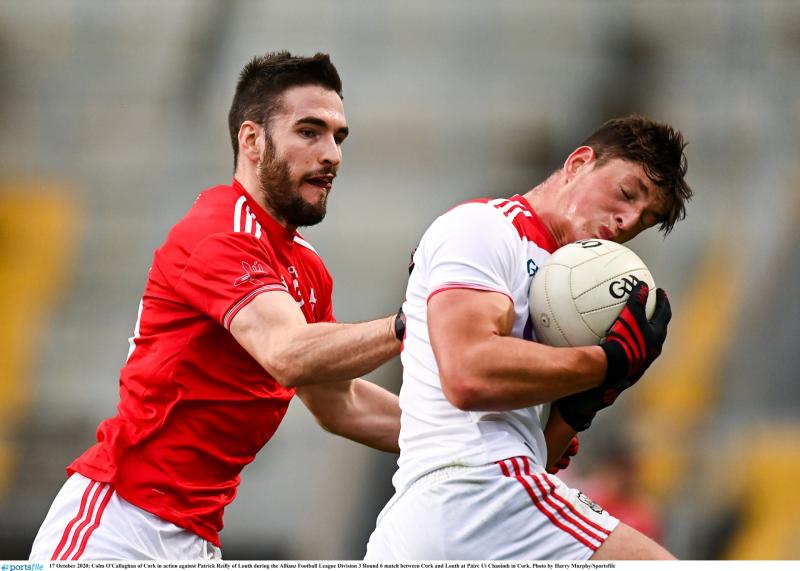 The unfortunate reality was that Louth were visiting Páirc Uí Chaoimh on Saturday evening as a cohort of condemned men. The outcome was inevitable: a heavy defeat which confirmed a sixth successive National League defeat and relegation to Division Four.

This was also the team’s 10th reverse in the last 11 competitive games, stretching back to last year’s championship pummelling by Dublin, and with promotion-chasing Down and in-better-fettle Longford to come before the festive season, an entire calendar span minus a victory is now a distinct possibility.

Louth’s prior encounter had resulted in a double-digit loss to Leitrim last spring, a shambles which was undoubtedly the lowest point of manager Wayne Kierans’ two-campaign reign. Therefore, it must be asked if, given the lengthy, Covid-enforced lay-off, the O’Connell’s man would have been better to step aside considering all the signs suggest his term will not be extended beyond the conclusion of the championship?

In both Carlow and Wexford, team bosses, Turlough O’Brien and Paul Galvin, stood down over the summer on the basis that their tenures would likely have been up at that juncture under normal circumstances. Hence, their moves gave their respective successors an opportunity to evaluate what they had ahead of schedule. Whether this will stand to the south-eastern counties into the new year remains to be seen.

But it could hardly damage whatever prospects they have of a positive 2021. So, accordingly, what has been or could possibly be gained from leaving the arrangement as per the opening five rounds of the Allianz League?

Kierans, a gentleman who has done quite a bit for Louth GAA since taking over as minor supremo for 2016, deserves to be remembered for his relative achievements, his guidance of the Reds’ U18 side to a first provincial final in 46 years (1971-2017) chief among them. Instead, however, it’s the dismalness of a programme of drubbings that will decisively tarnish his record and dilute, in mind anyway, his policy of lowering the age profile within the panel.

And if results aren’t indicative of the full tale, the absence of Declan Byrne, Ciarán Byrne and Ciarán Downey from the squad since training resumed is representative of a deeper issue. What value is there in devoting a life to Louth’s cause?

Add the trio’s absence to that of Jim McEneaney, Derek Maguire and Andy McDonnell and the Wee County’s assembly is deprived of some necessary quality.

Indeed, Louth only escaped a more severe annihilation courtesy of Cork’s several relaxed patches, during which the game lacked any sort of intensity.

Having shot over the affair’s opening two points, from Sam Mulroy - who was, again, the Leinster line-up’s best man, and the returning Anthony Williams inside jig time, the Reds went scoreless for 21 minutes, until Tommy Durnin converted, momentarily reducing the shortfall to 3-6 to 0-3.

The hosts’ match-winning spell had yielded goals via Colm O’Callaghan, Ian Maguire and pacey Paul Kerrigan, with Killian O’Hanlon and Paul Walsh among the minor registrars.

Mulroy, the key to Naomh Máirtín’s recent senior championship triumph, was blemishless from placed kicks, splitting the posts 11 times in all from both hand and off the deck, and it was his accuracy which moved Louth to eight first half points; notwithstanding Cork’s dominance as Ronan McCarthy’s troops were a dozen-less-two ahead at the interval.

And a blazing rampage on the resumption completely killed the contest, O’Hanlon, Damien Gore and Kerrigan (goal) putting the Munster competitors 4-11 to 0-8 clear.

Mulroy continued to carry the Louth fight and included in his batch of points was a beauty from along the left-hand touchline. But, not to be outdone in the cameo stakes, Mark Collins came in from the bench to fire 1-5 for the Rebels as the gap grew to some 17 points in advance of a Wee rally, when Cork had lost interest, that cut it by three.

That number, three, was also the tally of players Louth had dismissed. After Fergal Donohoe and Patrick Reilly had been ordered off on second yellow cards, calls which were arguably harsh, Emmet Carolan got a straight red for foul play, collapsing knees first on to an opponent.

Frustration or indiscipline, it’s unaccecptable. Louth have now had six red cards in as many games and five in the last two. And bear in mind, stretching back to Colin Kelly’s period in charge, this type of wayward streak where the rules are concerned has been apparent for quite some time. While the particular stats are not to hand, the issue has been recurrent.

The Reds have also conceded 12-81 in six league fixtures, by far the highest across each of the divisions.