Miracle needed for Dundalk to finish second after stalemate with Bohemians 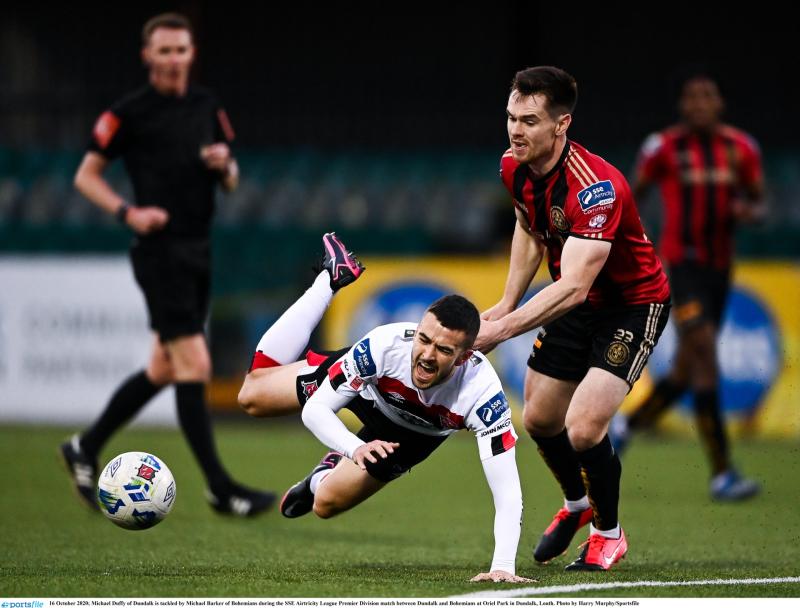 It’s now almost certain Dundalk FC will not finish any higher than third in the SSE Airtricity League after playing out a scoreless draw with Bohemians at Oriel Park on Friday night.

The match at Oriel was delayed by ten minutes due to the Bohs squad arriving just about 45 minutes prior to the original kick-off time as a result of what were severe delays on the M1.

It wasn’t the ideal preparation for either side, who both made three changes apiece from their last league fixture. Dundalk’s alterations from Tuesday night’s 2-0 win over Cork City at Turner’s Cross saw Brian Gartland, Greg Sloggett and Daniel Kelly all return to the fold.

Bohs were looking to make it five league wins on the bounce and they should have put themselves ahead within the first five minutes of this encounter. That was after some hesitant Dundalk defending allowed Andre Wright to try his luck from close range, but the Bohs frontman somehow diverted wide when it looked considerably easier to find the target.

The first half witnessed chances from two of the League of Ireland’s better sides. Dundalk’s first effort of the evening came from left-back Cameron Dummigan, whose curling effort from distance was easily gathered by the safe hands of Bohemians goalkeeper James Talbot.

Veteran playmaker Keith Ward – who previously had two separate spells with Dundalk – saw his audacious long-range effort sail over the crossbar before, at the other end, Seán Gannon got himself into the danger area down the right before his pull-back found its way into the feet of Patrick McEleney, but he couldn’t get enough on his effort as Bohs cleared their lines.

Dundalk were struggling to find an inch of space, with an extremely well-organised Bohs side constantly putting extreme pressure on The Lilywhites throughout the first half. They could have found themselves ahead five minutes before the break when Promise Omochere fed a pass into the path of Andy Lyons, who forced Gary Rogers to push around the post.

Wright, from the resulting corner, looped his header just over and onto the roof of the net as the sides went in even at half-time, although Bohs would have been the happier of the sides.

Dundalk were much improved in the second half, however, and Patrick Hoban did brilliantly to turn and lay it off for Michael Duffy, who from a tight angle, fired a shot which flashed across goal and just wide of the far post in what was a really nice move from the home side.

Duffy and Hoban combined again minutes later. This time, the Dundalk winger’s free-kick was headed just wide by the forward that bagged both goals in the recent 2-0 win over Cork.

Bohs still possessed a relative threat, though, and Omochere’s cross was headed goalward by Wright before Ward slipped in. However, Rogers somehow managed to keep his attempt out.

After coming off the bench, Nathan Oduwa showed some trademark skills out on the left before crossing for Hoban, but his glancing header flew just wide of the mark. At the other end, the impressive Daniel Grant unleashed a shot which was easily kept out by Rogers.

Hoban, in plenty of space, saw a shot well saved by Talbot late on, but ultimately, neither side could force a breakthrough as the game, quite rightly so, finished as a scoreless draw.