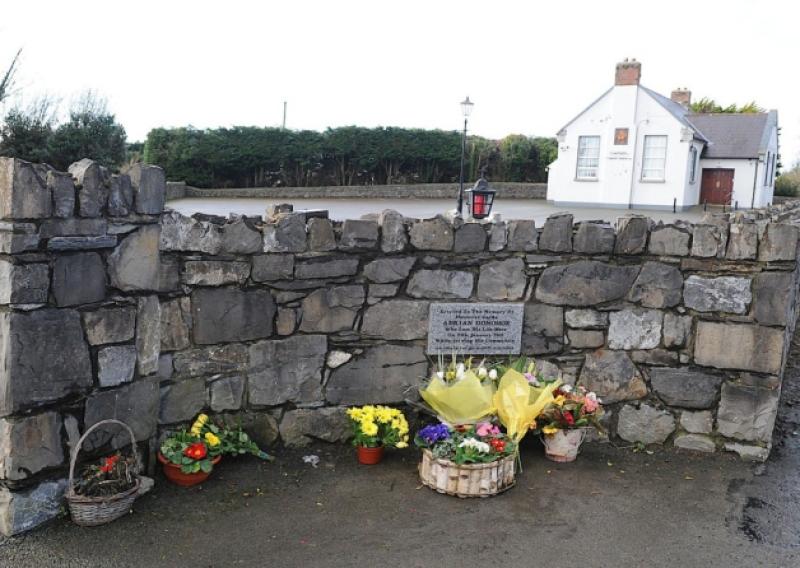 Former Detective Garda Joseph Ryan, who accompanied his colleague Det Garda Adrian Donohoe on the evening he was murdered at Lordship Credit Union in January 2013, has given an intensely personal victim impact statement at the sentence hearing of Aaron Brady, who was convicted of the capital murder of Det Donohoe.

His statement read: "The incident of armed robbery that occurred when my colleague and close friend Detective Garda Adrian Donohue was murdered in cold blood in my company, was the most horrific thing imaginable and dramatically changed my life forever.

"During the robbery both the assailants, the one armed with the shotgun and the other with the handgun pointed their weapons at me. I had no doubt they were going to shoot and kill me. That fear of my life being taken by the armed robbers is something that haunts me every day and the images are still so real. I feel it will always be that way.

"Straight away after the shooting I was in a complete state of shock and anxiety. At first I just wanted to be at work every possible minute to assist the enquiry team in any way I could to identify and arrest Adrian's murderers. The symptoms of high anxiety, not sleeping or continuously waking up with flashbacks, high blood pressure and hypersensitivity quickly became too much to manage and I was deemed unfit for duty.

"I was referred to a psychiatrist by the name of Dr Abbey Lane who I saw a few weeks after the incident. She diagnosed me as suffering from Post Traumatic Stress Disorder.

"She informed me that the symptoms described earlier, which also included hypersensitivity, fear of loud noises, mood swings and sensitivity to spatial awareness of people were typical of my PTSD condition.

"For the next few months I was treated by Dr Lane with a variety of treatments for PTSD including medication.

"The symptoms continued but with Dr Lane's treatment and tremendous support from my friends and the Gardai I returned to work on a part time basis but not on full duties.

"As the months past following Adrian's murder I tried my best to stay in work and managing the symptoms which would affect me in different ways depending upon things that were happening in my life and around me. Whenever progress in the murder investigation or media coverage of it occurred I would find things very difficult with flashbacks of the shooting and the gun being pointed at me becoming more prevalent.

"I found Dr Lane very skilled and was a tremendous help in the progress I did make. She did warn me however that another such traumatic event in my life could have a serious detrimental effect on the progress made and be very damaging."

"Unfortunately this did happen when two years later a very close friend and colleague in the Gardai was murdered on duty, He was closely linked to the incident of Adrian's murder and he was also shot.

"As warned by Dr Lane the extreme symptoms of the PTSD returned and I was again deemed unfit to continue work.

"I continued treatment for my condition and did again make some good progress, but was never able to return as a detective of the gardai.

"I was early retired, unfit for duty in July 2018. This was ten years before I would have finished in normal circumstances and I miss being in gardai every day. All explain the varying levels and symptoms of PTSD I have suffered with.

"To this day I still suffer albeit to a less degree, the symptoms described. Horrific flashbacks still occur, particularly at key times linked to the incident and investigation and trial. For a wide variety of reasons which include a move away from Ireland and an incredible amount of support from my partner I am managing things.

"The incident of being with Adrian when he was so brutally murdered has totally changed my life. I have had ten years of my garda service that I loved taken away from me. I still suffer a lack of confidence, isolation, I don't read newspapers in case of bad news. I can be hypersensitive to a wide variety of issues, I get very anxious with loud noises and have a lack of trust in people.

"My life has incredibly changed. I have moved away from the town where Adrian's murder occurred and currently stay in Spain, which I find easier to manage.

"Without the support of Dr Lane, the gardai, my work colleagues and my life partner I don't know how I would have found the motivation to carry on my life.

"Since I was a young lad I only wanted to work as a member of An Garda Siochana. When I was old enough to join they were not recruiting so I trained and qualified as a Registered General Nurse in London.

"Then when the Gardai were recruiting I returned to Ireland and was delighted to be accepted. I loved serving the community and as a Detective Garda dealing with criminals who inflict harm on people by the crimes they commit.

"You always accept the risk that comes with policing but never in your wildest dreams can you imagine to have experienced a friend and colleague being murdered in cold blood alongside you.