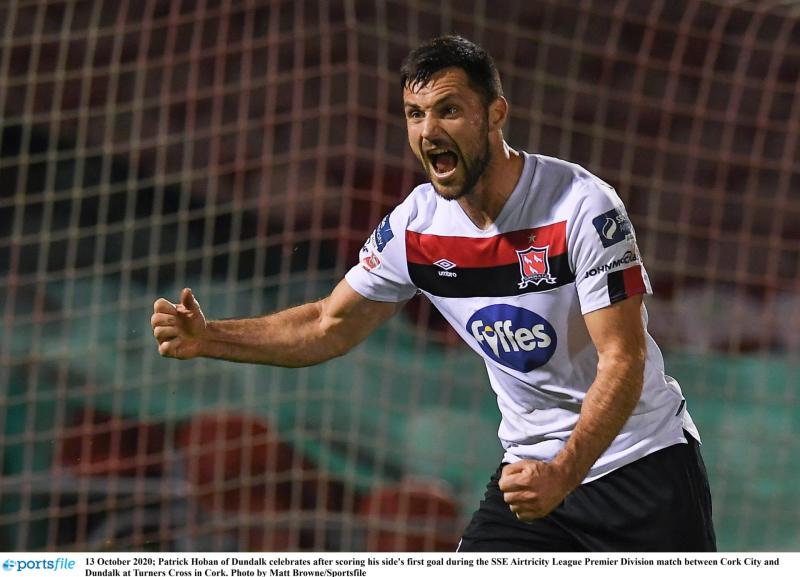 With two games in hand, Dundalk FC moved up to third in the SSE Airtricity League having recorded a routine 2-0 win over bottom-of-the-table Cork City at Turner’s Cross on Tuesday.

Despite having won just once in their previous seven league outings, Dundalk were the heavy favourites coming into this match, but for 73 minutes, they faced nothing but resistance from the struggling Munster outfit. Patrick Hoban boosted his confidence with a brace in the space of two minutes as Dundalk moved back up into the European places.

With Dane Massey seemingly out for the season and Darragh Leahy on international duty with the Republic of Ireland U21s, Cameron Dummigan was deployed at left-back. Not included in Dundalk’s Europa League squad, Will Patching and Joshua Gatt, both of whom started the last league match against Finn Harps, didn’t make the bench for the visit to Cork.

In fact, Dummigan – along with Andy Boyle, Chris Shields and Nathan Oduwa – were the only four players from that disappointing scoreless draw with Finn Harps to keep their place.

On what looked to be a heavy playing surface, Dundalk dominated throughout and had their first chance inside the first minute when Dummigan curled a long-range effort inches wide.

To their credit, Cork defended superbly in the first half, restricting Dundalk to a limited number of clear-cut opportunities, with Patrick McEleney firing an effort straight at the untroubled Liam Bossin. The Cork goalkeeper was again on hand when he gathered safely from Hoban’s scuffed attempt after McEleney had put the ball on a plate for him.

By far, the best move of the opening 45 minutes came from Dundalk when the menacing Oduwa, who was under pressure from two Cork defenders, managed to cross for Duffy, who then laid the ball off to Seán Murray, but he subsequently volleyed well wide of the target.

Oduwa was now establishing himself as quite a nuisance for the Cork defence and his cross from the right looked to have been diverted out by the hand of Alan Bennett, but referee Neil Doyle ignored the protestations of the visiting players and no penalty was awarded.

There was half-chances at both ends before the interval and the underutilised Gary Rogers had to be alert to get down well to save from Cian Coleman’s shot from distance. That was before Seán Gannon had a shot flash across goal as the sides went in scoreless at the break.

Dundalk had more chances after the restart and Duffy saw a shot parried by Bossin and, minutes after that, the Cork stopper this time gathered from Gannon’s deflected effort.

Cork did have chances and their best was from Dylan McGlade, whose rasping shot was brilliantly saved by Rogers before Gearóid Morrissey fired wide not long after that opening.

However, it was Dundalk that broke the deadlock when, from a Dummigan cross, Bossin collided with one of his own defenders, allowing Hoban to finish easily and make it 1-0.

The visitors doubled their advantage just two minutes after that when Gannon’s low cross from the right was tapped in from close range by Dundalk’s number nine as The Lilywhites cruised to the three points while for relegation-threatened Cork, time is rapidly running out.