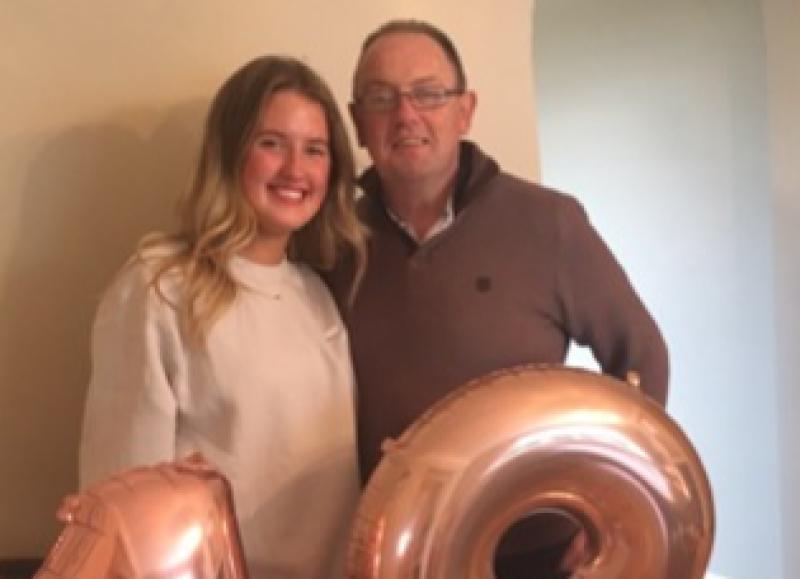 Marking an 18th birthday for many young women means glamming up for a big celebration and being gifted with an abundance of presents, part and parcel of what is expected for their coming of age. However, for a young Dundalk woman, who celebrated this milestone birthday amid pandemic restrictions, on Sunday 11th October, she had a different perspective.

Katie McAlevey from Drumcar said, “I am just grateful to be able share my 18th with my family and especially my father whose quality of life has improved considerably since his kidney transplant last year.  That’s why, instead of getting presents, I want to help highlight organ donation and raise over €800 for the Irish Kidney Association through a Facebook fundraising platform” HERE

Dancing since she was three years old Katie is a world champion Irish dancing medallist. She is oldest of three siblings and daughter of publican Matt and nurse Ciara McAlevey.   Katie explained, “my father has had two kidney transplants in his lifetime. He received his first transplant when he was 30 years old before he married and it lasted eighteen years. That’s the same length of time that I have been alive! His first transplant was a success for a long time, and even though it eventually failed, my family are very grateful to his first kidney donor for giving him a life-line and eighteen good years to enjoy life, get married, run a pub and have a family.”

“His second transplant took place in May 2019 because of another selfless organ donor.  Before this transplant, for six years he had to have dialysis and attend the Beacon in Drogheda  three times a week for his treatment. For most of my teens my father has been struggling with his kidney failure and even though he managed to keep running the family pub in Castlebellingham, he had very little energy and poor quality of life.  Even when he was having a difficult time, he always remained upbeat. With the little energy he had, he still made the effort to travel around with me and my sister as we competed in dancing competitions in different parts of the world while organising dialysis treatment wherever we would go. He also was on the side-lines to support my younger brother when he played football. He helped raise €4500 for the IKA through fundraisers he ran in the pub while he was on dialysis. I am proud of my father for the way he has lived with his kidney condition and I am also proud for the families of his kidney two donors.”

"Our family would like to express our appreciation to Jackie and the staff at the Beacon in Drogheda for taking such good care of my dad when he was receiving dialysis treatment and also to the transplant and nursing team at Beaumont Hospital who took care of him when he received his transplant."

“When he got his transplant last year, I could see that the difference in him straight away, it was like night and day. He has a much better quality of life now. We are making the most of having him stay at home with us. He has much more energy now and his complexion looks so much healthier now also.   Unfortunately, after Covid lockdown, he has had to close the business because of all the restrictions on pubs as well as the fact that as he is a transplant patient and immune suppressed and must be extremely careful.”

Katie and her sister Holly (16) are 6th and 5th year students respectively at St. Vincent’s Secondary School in Dundalk. The are both world dancing champion medallists from the hugely successful dancing school Scoil Rince Mona Ni Rodaigh. Katie and Holly as solo dancers have been placed among the top 30 finalists from all over the world every year for almost a decade while also winning the coveted World Champion title as part of the 8-hand reel team. This year would have been their 10th year to take part in the World Dancing Championships which would have taken place in Ireland were it not for Covid 19.  Katie and Holly’s younger brother Mark (age 12) doesn’t share his sisters’ passion for Irish dancing, he is a keen footballer playing with his local club, Rock Celtic in Blackrock.

Katie who is now in her final year of school and she is undecided about whether she should pursue a career in nursing or as a primary school teacher when she leaves. However, she explains “the one thing I do know is that were it not for organ donation my father my not be here and I felt very fortunate to have him around to share with me in celebrating my birthday”.

Organ Donor Cards can be obtained by phoning the Irish Kidney Association  on 01 6205306 or Free text the word DONOR to 50050. You can also visit the website www.ika.ie/get-a- donor-card or download a free ‘digital organ donor card’ APP to your phone.