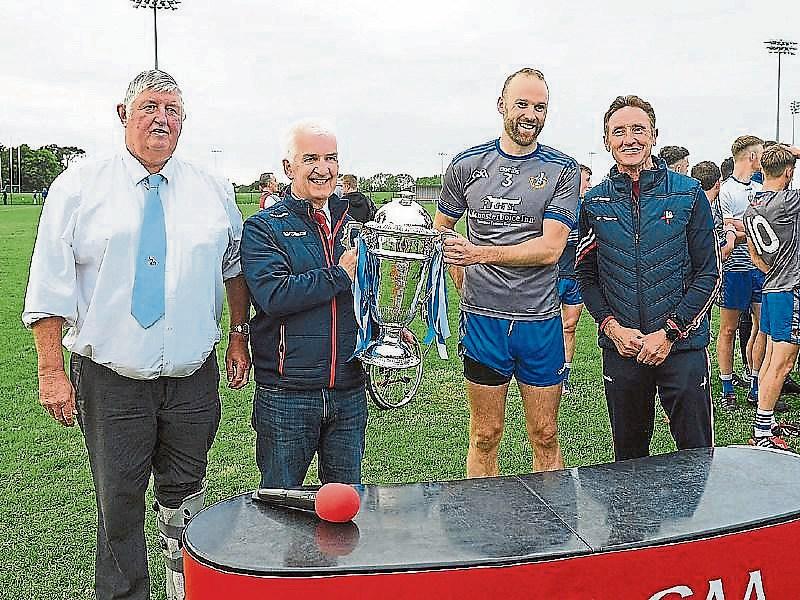 Last Sunday week’s defeat by Naomh Mairtin’s was St Mary’s fourth in a senior final since they last won the title, in 1995. Two of those defeats were to Joe Ward Cup first-time winners, Mairtin’s and, in 2016, Sean O’Mahony’s.

Mary’s have had more defeats than wins, their record in finals very similar to Cooley Kickhams’. Whereas these two were once among the elite, there are now new kids on the block. There have been four first-time winners since the turn into this century, the two mentioned above along with St Patrick’s - whose initial 2003 success was followed by six more - and Mattock Rangers, who’ve brought up a four-timer.

Mary’s have provided the county with some of its greatest-ever players, going back to when the club was founded in 1928. Three of the 1957 All-Ireland team wore the blue jersey, while two others were in the subs. And though he was with Dublin’s Sean McDermott’s at the time, the great Kevin Beahan will always be linked with the Pairc Mhuire club. He played there before and after ’57, winning two of his five senior championships on his return, in 1960 and eight years later.

It could be argued that an even greater distinction than their contribution to the All-Ireland came Mary’s way during the 1948/’49 National League. Louth played Cavan - who had won the All-Ireland semi-final meeting of the sides a few months earlier - and wearing the red jerseys Nos 2 to 7 were six Mary’s players, Jack Bell, Johnny Malone, Nicky Roe, and the famous half-back line of Sean Boyle, Paddy Markey and Paddy McArdle. Another from the club, Paddy Smith - Kevin Beahan’s brother-in-law - lined out for Cavan.

Louth won the quarter-final, beat Down next time out, and then faced Mayo in the decider. As happened eighteen months later when the sides re-opposed in the All-Ireland final, Mayo won.

From 1946 to 1960, coinciding with, arguably, the county team’s greatest period on the national scene, Mary’s won the senior championship five times. But there were also several defeats in this time, including one in All-Ireland year, when Oliver Plunkets pulled off a shock victory.

Some records have Mary’s on eleven wins, but that includes the title won by Ardee St Mochta’s in 1914 and not, for some reason, the one which went to Ardee Volunteers eleven years earlier. In the 92 years since Mary’s first registered as a club, there have been ten wins, the first in 1946, the most recent 25 years ago. But along with that there have 16 defeats.

“Not really”, I can hear some of the older Ardee brigade shouting in this direction: “What about 1942?”

That year Mary’s were scheduled to play Gaels in the final but failed to turn up. The reason? Due to war-time restrictions, there was no motorized transport available, and therefore they couldn’t travel. The County Board awarded the game to Gaels, but Mary’s went to the Leinster Council and were successful with their appeal.

Played in the Athletic Grounds, the re-fixture was won by Mary’s, 2-3 to 0-7. But it didn’t end at that. Gaels objected on the grounds that Mary’s played an ineligible player. The county executive found the objection to be well-founded and awarded the title to Gaels. Mary’s went back to the Leinster Council, but this time the provincial body sided with the County Board.

And that comparison between Mary’s and Cooley Kickhams? As said, Mary’s record reads, won 10, lost 16. Kickhams: won 9, lost 17, five of the defeats coming since the last time the Joe Ward Cup rested in Fr McEvoy Park, in 1990.

The initial Cooley defeat was away back in 1917, and it was 1935 when the title first came to the peninsula, brought there by a team which had the man known as the Prince of Full-backs, Eddie Boyle, included. Jim Murphy was goalkeeper and captain on the team that beat Wolfe Tones in the final. Mick Callaghan was on the right wing.

The Louth championship has a rich history and some great stories. The latest was written just over a week ago. Naomh Mairtin have now got a place at the top table, and their win will surely give encouragement to those who have yet to register. Three other teams in this year’s title race are still waiting for a first win, but bouncing along nicely since reappearing in the top division, in 1959, are Newtown Blues. Their 23 championship wins have them a mile ahead of the rest.