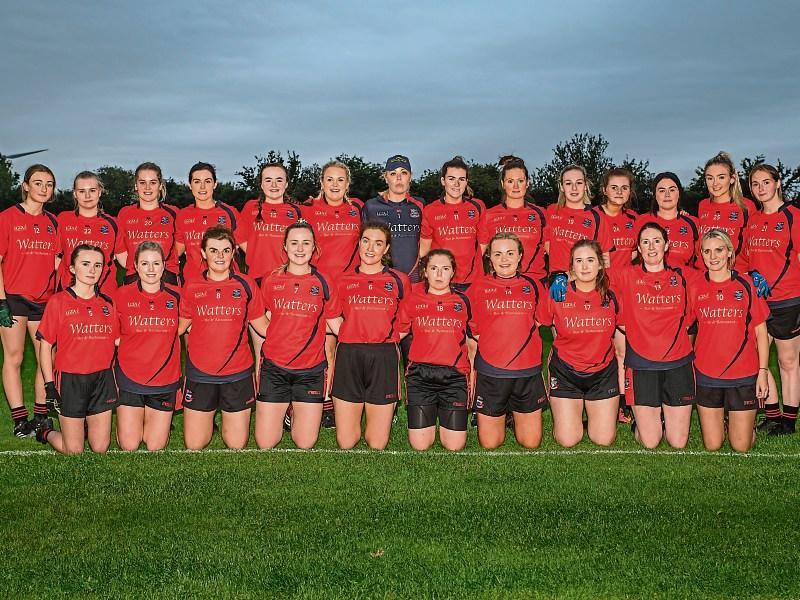 Mattock Rangers marked their return to footballing matters after a 12 month absence by taking the Junior Championship title after a hugely entertaining final on Saturday night in Young Irelands GFC.

The story of Mattock Rangers in recent times has been a rollercoaster. They beat Clan Na Gael in the 2017 Division 3 League final and twelve months later they took the Div 2 title by beating a fancied St.Patrick's in the decider.

At the end of the "18 season their small panel were hit by a number of retirements leaving them unable to field last season. They have re-emerged this year with a youthful squad which can also call on a number of experienced players.

Their opponents on Saturday evening have also been out for a spell. Cuchullan Gaels have not had the numbers to field for some time while Dowdallshill did'nt field in 2019 for similar reasons.

Barry Englishby's side made a lively start and got off to the perfect start when Maria Reid cut through the Cuchullan/Dowdallshill defence and fired to the net after just two minutes. The same player added a point soon after before the combination side got off the mark as Erin McLaughlin found the net in the sixth minute

Rangers came back as Reid(2) and O'Brien added points but similar scores from Erin McLaughlin and Louise Corrigan left it 1-4 to 1-2 in the eleventh minute.

The combination XV did have a let off moments later when Louise Corrigan was very unlucky to see her effort come back off the crossbar.

Points from Reid and O'Brien did extend the lead to four, but the north Louth girls were back in the game with a well worked goal as Michelle O'Hagan won possession and her accurate pass put Caoimhe Creighton in the clear, her shot found the net despite keeper Anna Brennan getting a hand to it but was unable to prevent it crossing the line to reduce the defecit to the minimum.

Mattock came back with points from Sarah Noone and Corrigan before impressive midfielder Caoimhe Creighton having been denied a second goal by a fine save by the Collon keeper moments earlier , eventually got her second major, a powerful run was finished with a vicious shot which gave Mattock net minder Anna Brennan no chance in the 20th minute 3-2 to 1-8.

The goal sparked Mattock into life and they had three of the next four points from the reliable Maria Reid before Caoimhe Creighton completed her hat-trick, with another superb finish putting her side in front for the first time 4-3 to 1-11.

But it was Mattock who again moved through the gears as first keeper Una Pearson did well to push away Maria Reid's goal bound shot, while they hit three unanswered points from Niamh Dooley, Sarah Noone and Reid to leave them 1-14 to 4-03 in front at the break

Rebecca Lambe Fegan did give the combination a glimmer of hope as her shot was pushed away by Anna Brennan but the county minor keeper lashed home the rebound.

That was as close as they got as Abbie O'Brien fittingly had the last say as she put the gloss on a fine individual performance with her side's third goal late on.

"The victory was a great team performance, we hadn’t played as well as a team in any of our league matches. So thankfully we produced the goods when we needed to. 3-21 was super scoring. Abbie O'Brien was tremendous on the '40' scoring 1-06.

“Our U16 players Lucy Watters, Rebecca Smith and Louise Corrigan played a big part today and also in our league matches. They have really given the Adult set up a lift as they bring energy and fitness to the squad. This will definatley help us to drive us on again and hopefully we can get a few more younger girls to join the set up next year.

“Intermediate Championship is going to be a big step up for us but we will relish the challenge and see how we get on.”

She added: “This final was absolutely fantastic. It was a great spectacle of Ladies football, end to end stuff with plenty of superb scores from both teams. We knew it was going to be a tough battle.”