Local gardai are clamping down hard on the illegal sale of fireworks this year, Michelle O’Keeffe reports 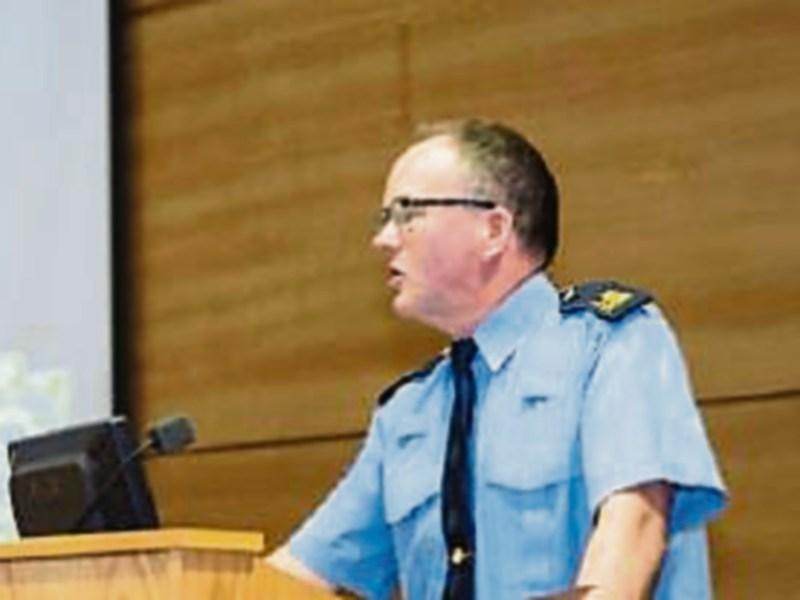 Gardai have launched a crackdown on fireworks targeting local houses of people selling the illegal devices this Halloween season.

Local gardai are searching houses in the Dundalk area where children as young as 12 years of age are buying dangerous illegal fireworks with the aim that they can prevent someone being seriously injured by the explosives.

The move by gardai in the area is part of the nationwide Operation Tombola which targets the sale and distribution of fireworks with the aim of keeping our communities’ safe during Halloween.

Sergeant Eugene Collins, of Dundalk’s Garda Community Policing Unit, told the Democrat that as part of the operation they will be getting search warrants for properties where people selling fireworks live and will be setting up cross-border checkpoints to prevent the illegal devices being brought across into this jurisdiction.

Sgt Collins warned parents and children that fireworks are illegal and “extremely dangerous” and it is only a matter of time until someone is seriously injured.

A teenager had the top of one of his fingers blasted off by a firework in Dublin last week and four years ago a 15-year-old boy in Dundalk suffered serious injuries to his face and hands from a firework.

The garda operation was launched early this year due to the amount of fireworks on our streets with Sgt Collins saying that children and teenagers in local housing estates are lighting fireworks and throwing them at cars and houses.

Gardai will also be working with the local council to remove materials being stockpiled for bonfires and there will be additional officer presence in communities on Halloween night as part of Operation Tombola.

Sgt Collins said: “As part of Operation Tombola local gardai are searching properties in the local area where people are selling fireworks and cross-border checkpoints will be in place to target people who are attempting to enter this jurisdiction with illegal fireworks.

“Illegal fireworks are a particular problem in Dundalk and Louth as the sale of them are quite readily available across the border, but we will have checkpoints in place to prevent people bringing them into this jurisdiction.

“We are particularly conscious that there are certain housing estates in the areas where kids and teenagers are letting off fireworks.

“We are also aware that there are people in properties in these estates selling the illegal fireworks to them.

“Gardai will be getting warrants to search these properties and seize these illegal fireworks.

“We will be targeting these particular houses that are selling illegal fireworks to children to reduce their availability and prevent youngsters from getting injured by them.

“In recent years children letting off fireworks in estates and parks had seemed to have dried up a bit and wasn’t happening as early in the year, but this year it has escalated and started earlier than usual.

“Teenagers and children have sustained horrific injuries across the country from fireworks.

“Local children as young as 12 are getting their hands on fireworks – kids and teenagers are lighting bangers and throwing them around estates in the area.

“Some are lighting them and throwing them at cars and houses in local areas and it is just a matter of time until someone is seriously injured.

“It is so dangerous as they are extremely volatile – their fuse time is so unpredictable.

“The consequences are so serious; fireworks are explosive materials.”

The punishment for someone caught buying, selling or using illegal fireworks is up to a fine of €10,000 or five years in prison.

Dublin teenager Sean Redmond, 17, has told about the terrifying moment a firework malfunctioned in his hand and blew off the top of his finger last week.

Sean, who suffered life-changing injuries and had to undergo a seven-hour operation, has warned young people to stay away from the illegal devices.

And a 15-year-old boy from Dundalk ended up in hospital after he was injured by a firework on Halloween night in Blackrock in 2016.

The local teenager suffered injuries to his face and hand when a firework exploded close to him.

“To ignite a firework is an offence unless you have a licence to do so for an official, organised display”, Sgt Collins said.

“The Department of Justice is responsible for granting licences for firework displays and they never do so unless the person or organisation has insurance, health and safety qualifications and measures in place and there is a pyrotechnics expert.

“Parents having supervised firework displays for children in the neighbourhood is illegal.

“They don’t have the expertise and are not qualified to do them and are dangerous as children or adults can be injured at them.

“The use of fireworks in any circumstances, be it supervised by adults in neighbourhoods or children running around lighting them in estates is illegal, as is selling and distributing them.”

Sgt Collins said that due to Covid-19 restrictions their annual school campaign warning children of the dangers of fireworks has been problematic as gardai can’t go from class to class speaking to pupils about the dangers.

However, posters are being placed in schools warning kids about the dangers of fireworks and bonfires.

As part of the garda operation officers will also be working to prevent illegal bonfires from taking place with the aim of preventing someone being injured and anti-social behaviour taking place on Halloween night.

Sgt Collins said: “We will be calling around to local tyre manufacturers and garages warning them to ensure their tyres are secured and old tyres and palettes are not lying around for children and teenagers to collect for bonfires.

“They are quite good ensuring these materials aren’t available to kids around Halloween, but we will be approaching them all this year again to remind them to make sure tyres and palettes are not able to be accessed.

“We will also have a radio campaign warning people not to be stockpiling materials for bonfires in local communities.

“The gardai in Dundalk will be working with the Louth County Council to ensure this doesn’t happen and bonfires are prevented.

“The council will be going into communities to remove any stockpiled material and will be accompanied by gardai when they do it.

“Bonfires are illegal and dangerous and encourage underage drinking and anti-social behaviour.

“On Halloween night there will also be additional resources available to gardai through Operation Tombola with more garda presence in our local communities.

“There will be a highly visible garda presence to ensure there are no fireworks or bonfires that could cause serious, horrendous injuries and to prevent anti-social behaviour.”

Chief fire officer for Louth County Council Eamon Woulfe also warned parents and children about the dangerous of fireworks and urged them to stay away from the illegal devices to keep everyone safe this Halloween.

“The law is clear, any sale, distribution and use of fireworks is illegal and people will be prosecuted”, he said.

“There are kids and teenagers running around with fireworks which is so dangerous.

“Someone is going to be seriously injured and I would urge everyone to stay away from them.”

It is understood there could be a surge in fireworks this year as people are buying more of the illegal devices as most public events for Halloween have been cancelled due to coronavirus safety restrictions.

“It is grown adults who are putting these illegal fireworks into the supply chain and selling them to children and teenagers”, Cllr Sharkey said.

“It is adults driving lorries full of fireworks through ferry ports.

“It is a problem every year around this time.

“These people must be prosecuted.

“I would also call on parents that if children have money know what they are spending it on and be aware of the dangers of fireworks and ensure their kids don’t have them.

“I would also warn children and teenagers to stay away from them as they are so dangerous and can cause serious injuries.”

Justice Minister Helen McEntee launched a new “Don’t Add To The Problem” campaign recently which urges people not to use fireworks because it risks leaving people in hospitals that are already under pressure from rising Covid-19 cases. She said: “This year, more than ever before, we need to remember our frontline workers who have gone above and beyond the call of duty since the start of the pandemic.

“We asked them to put their lives on the line in the battle against Covid-19.

“We owe it to them this Halloween to ensure that emergency rooms are not filled with preventable but serious injuries, caused by the use of illegal fireworks.

“This would add unnecessary pressure.”