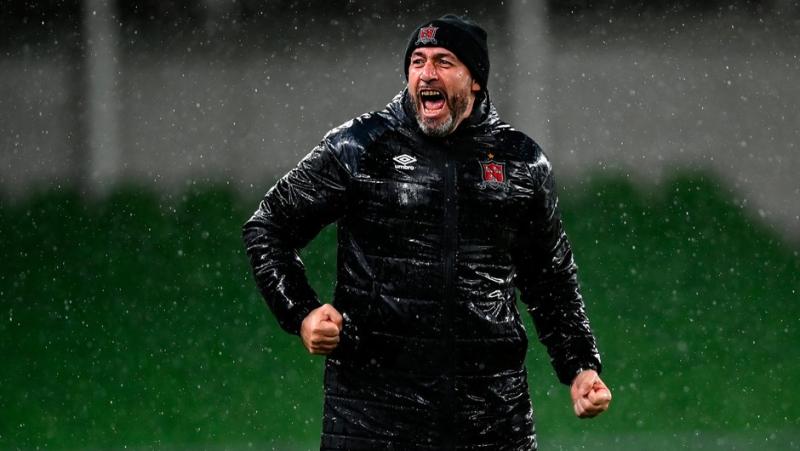 Filippo Giovagnoli has refused to get drawn into speculation that he is set to be appointed as the Dundalk FC head coach on a permanent basis after becoming just the third person ever to guide a League of Ireland club into the Europa League group stages last Thursday.

The 49-year-old Italian, who replaced Vinny Perth on an interim basis in the Oriel Park hotseat less than one month ago, has sparked the most unlikeliest of revivals which has seen the fortunes of the outgoing SSE Airtricity League champions change dramatically.

"We are discussing other things,” he said when asked if chairman Bill Hulsizer has offered him the position on a more long-term basis. “It’s about understanding what the club wants to do and the structure of the club. It’s a bigger discussion. This is an important club and it has a lot of potential, so we just have to discuss this now. My contract is secondary.”

Dundalk suffered a European hangover on Sunday evening at Oriel as they – after making ten changes to the starting line-up – were held to a scoreless draw by struggling Finn Harps.

The Lilywhites, who currently occupy sixth-position with two games in hand, now go into a crucial match with St. Patrick’s Athletic in Inchicore next Friday in the battle for Europe.

However, Giovagnoli has expressed concern at Dundalk’s arduous fixture schedule, which incorporates six games between now and the end of the month, with further squad rotation likely to be a recurring feature of whatever is left of Dundalk’s already unpredictable season.

“It’s now important for us to pay a lot of attention to the league because we need to recover points, but it’s not easy because our October is going to be really busy. We’re going to play every three days. I’m happy that I could prepare for the game against Finn Harps this week, but it’s probably going to be the last time that I can prepare.

“You cannot risk players that have injuries after two days and we have a strong roster and I used all the players. This is the only way if we want to perform in all the competitions and try to be successful.

Dundalk had what looked like two blatant penalty appeals waved away against Harps on Sunday evening, while assistant Giuseppe Rossi was sent to the stands in stoppage-time.

“He said that he (Rossi) hit the bench,” continued Giovagnoli. “Sometimes they (the officials) are focused on these kind of details and less on the game because they were a couple of situations where if they are maybe a little bit more brave, it could be different.

“We still have a chance to win the rest of our games and what is important is that we get into the position to play in Europe next year, so we’re going to keep going to work, but it’s good to have a busy October because it means that we did something good.”