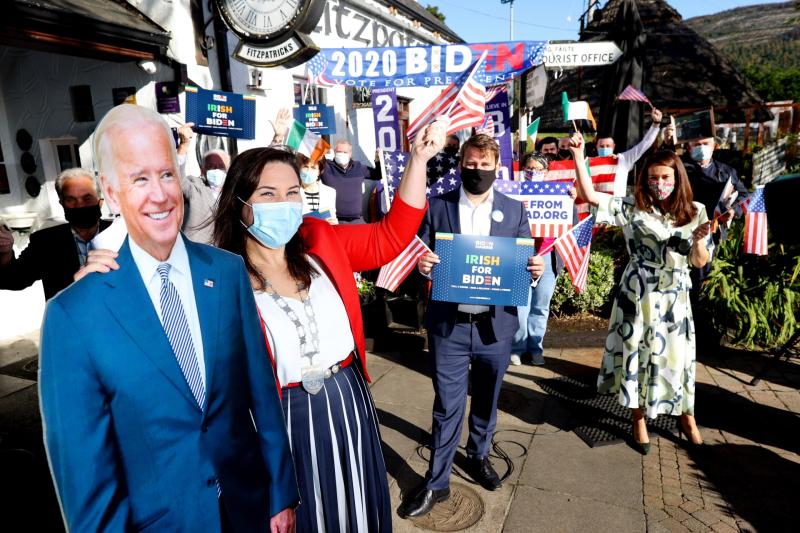 The event took place at Fitzpatrick’s Bar & Restaurant, one of the locations Vice President Joe Biden visited in 2016.

The ‘Irish For Biden’ campaign is encouraging Irish people to contact their friends and relatives in the US to get out and vote for Joe Biden when he takes on current President Donald Trump in the election on Tuesday, November 3rd.

The event was formally launched by Cathaoirleach of Dundalk Municipal District Council, Cllr. Emma Coffey. Also in attendance was Senators John McGahon and Erin McGreehan along with several members of the Finnegan family, who are relatives of Joe Biden through his mother, Jean Finnegan.

The event was also attended by several of the Carlingford residents who met Vice President Biden during his visit in 2016.

Commenting on the event, Councillor Emma Coffey said; ‘’The Presidential election is a great opportunity to promote one of our own, Joe Biden. The occasion is to celebrate his Irishness and help foster relations again between our two great countries.

“The tagline in our campaign to mobilise Irish America is ‘Call a Cousin, Phone a Friend, Ring a Relative.’

“Get in touch with them and tell them its about time we had another Irish American in the Oval Office.’’

Paul Allen, lead organiser of the event, said; ‘’Our firm was privileged to work with Louth County Council back in 2016 in arranging the visit of the Vice President.

“Our role is to stimulate interest, capture the imagination and seek to secure the return of another Irish American to the White House.’’

The campaign was launched in Carlingford due to Joe Biden’s strong links with the area.

His mother’s family name is Finnegan, who hailed from the Carlingford area and emigrated to the US in the 1850s.

All eight of Joe’s great great-grandparents on his mother’s side were born in Ireland in the early 1800s.

Two of his great-grandparents on his father’s side were also born in Ireland.

In total, 10 of Joe’s 16 great great-grandparents were born in Ireland.