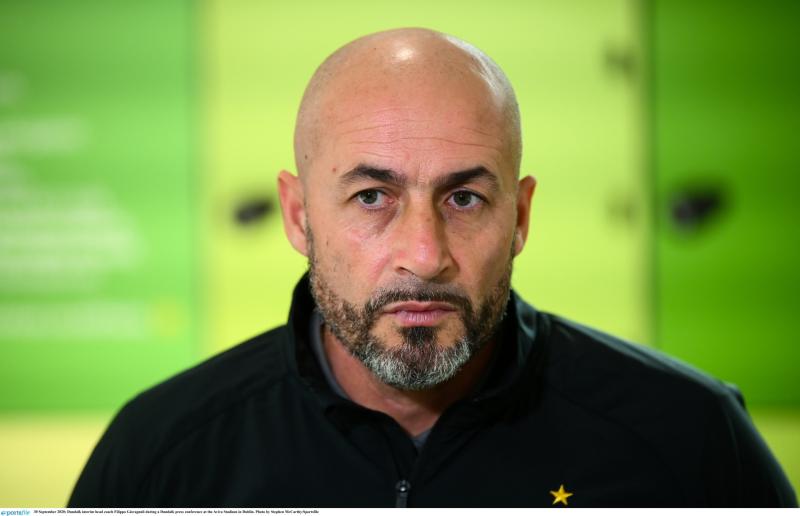 Filippo Giovagnoli’s short-term contract may run out at the end of the current season, but the Italian says that he would ‘love’ to remain as the Dundalk FC head coach beyond then.

The unknown Giovagnoli, along with his assistant Giuseppe Rossi, controversially arrived at Oriel Park just one month ago to replace last season’s league-winning manager Vinny Perth.

It’s since been a meteoric rise to prominence for Giovagnoli and Rossi, who both came from the Met Oval Academy in New York. The charismatic Italians have already guided The Lilywhites to two away Europa League victories against Inter Escaldes and Sheriff Tiraspol.

Next up for Dundalk is Faroese champions KI Klaksvik in the play-off round at the Aviva Stadium tomorrow night, with a lucrative place in the group stages the prize on offer.

“It’s an amazing opportunity for me and Giuseppe’s career, but I can’t focus on us now,” Giovagnoli told The Democrat at Wednesday afternoon’s press conference at Oriel Park.

“I have to stay focused on what this achievement could mean for the club in the future. It’s not about me and Giuseppe. It’s about the players, the club, the history of this town and Ireland. I think there are bigger things than personal achievements at the moment. It’s something that we have to conquer together.”

Many questioned the appointment of the rather inexperienced Giovagnoli last month, but the Italian has already stated that the town of Dundalk has truly resonated with him. So much so, that he is desperate to continue the work he’s already started in the coming years.

“Without a doubt, I would love to stay and extend my contract and build a project here that involves the entire club and the youth academy,” he said, with little hesitation, when asked whether or not he would like to remain in Dundalk beyond the end of the current season.

Dundalk go into tomorrow’s match with KI as the heavy favourites, but Giovagnoli is going to treat the Faroese side with same respect that was shown to Sheriff in the previous round.

“Tomorrow is a final, so tactically, we have to understand the type of game it’s going to be,” he continued.

“We are prepared tactically. We have a plan of what we want to do and we’re going to stick to the plan. The same thing we did against Sheriff, where we started the game and, unfortunately, we had an injury in the first ten minutes and then they scored against us.

“But, we were so good at sticking with the plan. We didn’t panic and worked together and this is the same thing we have to do tomorrow. We just need to stay focused, perform and not be emotional. It’s not about emotion now because we have to perform and we are ready.”

Club captain Chris Shields is suspended for tomorrow’s tie after amassing three yellow cards in European competition already this season. Andy Boyle, however, returns from the one-match suspension which kept him out of last week’s dramatic win over Sheriff in Moldova.

Injury-wise, Seán Gannon, who had to go off in Moldova after sustaining an ankle injury is hoping to be fit to play against KI at the Aviva. Dane Massey remains absent, however, after undergoing hip surgery. Apart from those two, Giovagnoli has no other injury concerns.

Due to current Covid restrictions, no supporters will be permitted into the Aviva tomorrow, but the match is being broadcast live on RTÉ television with the coverage starting at 7pm.