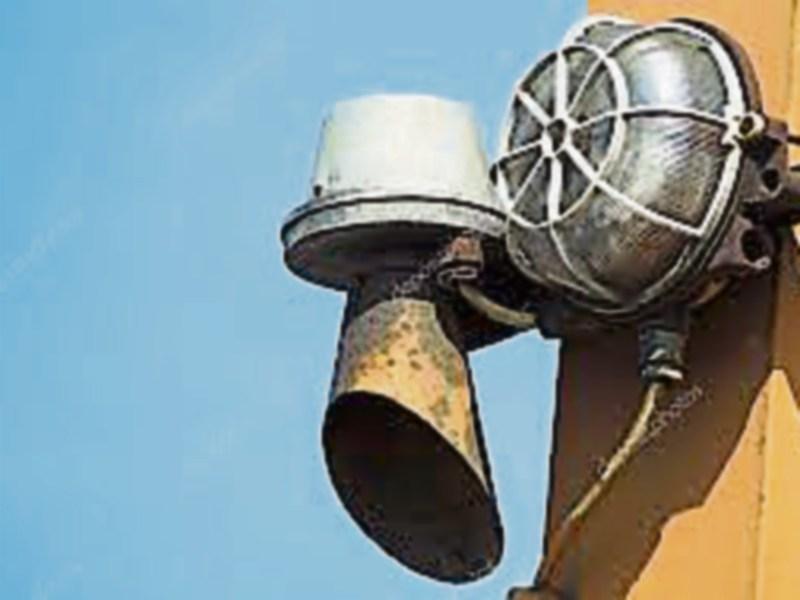 There may not be many around now who can recall the sound of the 'Factory Horns' that called the people of Dundalk to work in the last century. They were especially noticeable on frosty mornings when sound would reverberate around the Town to remind people, not just of work, but of other things like the start of school classes or to remind women that it was time to begin certain chores in their home!

Probably even fewer will recall the time when siren horns were used for other things, such as an alarm of a serious fire outbreak somewhere in the district or when there would be a crescendo of sound coming from various points in the Town to announce an 'Air Raid' practice in World War 11. As far as I am aware those air raid sirens were only ever used in practice as, I think, there would not be practices held during the hours of darkness and the only time bombs ever fell on Dundalk were at night! Incidentally, does anybody now recall that there two different signals used for an 'Approaching Air Raid' and the other for the 'All Clear'. Anybody who worked in England during Wartime Blitz would have only been too well aware of those sounds but, even as a young child, I can clearly recall the sense of dread that those sounds would create on the mind --- even though we assured by our parents that it was only a practice and that no bombs were about to hit our homes!

The 'fire sirens' were heard around the town for many years after the Wartime Emergency and the loudest was to be heard emanating from the roof of the Town Hall building in Crowe Street, although I think there were fire sirens on other buildings in Town, like Carroll's Factory in Church Street and, possibly, some of the footwear factories. I had a slight disagreement recently with a friend of mine as to where the one which called out the firemen to serve on the Brigade was located; I thought that there was a siren on the roof of the old Fire Station in Defenders' Row but he maintained that it was only the one on the roof of the Town Hall that was used. We did agree, however, that there used to be a Fire Alarm button at the side of the front door of the Town Hall. The Caretaker, John McEneaney, used to stand beside it to push it when an emergency call would be received at the Town Hall. Perhaps somebody who served on the Fire Brigade in the past could settle that argument?

To get back to the memories of the 'Factory Horns', however, I was reminded of them when a person who has not been living in Dundalk for very long asked what was that weird sound they could hear sometimes in the late afternoons. I was able to tell them that it was the sound of a compressed air horn that was once used to summon men who worked in the Railway Locomotive Works at Ardee Road which was closed back in 1958. This old compressed air horn was restored in fairly recent times by one of the enterprises which use part of the old Works premises and is sounded at 5pm weekdays from Monday to Friday to mark the end of work in their premises.

A friend of mine who worked as a fitter in the old Works until it closed in 1958 tells me that when he was there, this horn was sounded three times in the morning. Firstly at 8 am, then at 8.20 and finally at 8.30. He recalled that he would have to be at a certain point on his bicycle when the second horn would sound to ensure that he would be 'clocked-in' in time to ensure a full day's wages. The horn was also sounded at 2 pm to mark the end of lunchtime and, finally to mark the end of normal work. Some 'old hands' could anticipate the final horn and would be able to 'Hit the Slope' leading to the Ardee Road, wheeling their bicycles, while the sound of the horn was still vibrating.

The same friend has told me that the compressed air horn was (and still is) housed in a special pump room, beside the main Dublin-Belfast railway lines, and was activated from the Time Office near the Works entrance. He also recalled, somewhat amusingly, that on one occasion long ago, on a Sunday when some youths broke into the office and one of them had pushed the bell to set off the horn. The result was that most people in Dundalk thought a serious fire had broken out in the Works and many feared for their employment!

Another recollection by the former fitter was that he believed that the compressed air horn had been installed by the G.N.R. company around 1950 to improve efficiency at the Works. Prior to that time, men had been summoned to work by a loud whistle which had been there from the time that the Works was first established in about 1880. He said that he could not recall hearing the old work whistle himself but agreed with the opinion of an old resident of that part of Dundalk who said that, at the time that the Works was first opened, the whistle was sounded at 6 am and that 'end of work' whistle did not sound until 6 pm. Men even had to work on Saturdays from 6 am but I think they might have finished a little earlier on that day to prepare for the Sabbath.

I am not sure when the staff in the offices, which included many women, had to be at their desks but am sure it would have been at much the same time as the Works, including Saturday mornings. Those who worked in the Time Office, like Tom McDevitt, who wrote the popular Roamer notes for the Dundalk Democrat for many years. Tom once told me that all the men employed in the G.N.R. Locomotive Works had a number and that, as a young man, he had the task of handing out disks with their numbers so that they could clock-in. He often, jokingly, remarked, he could remember faces of people he met around the town better by those numbers than their surnames!