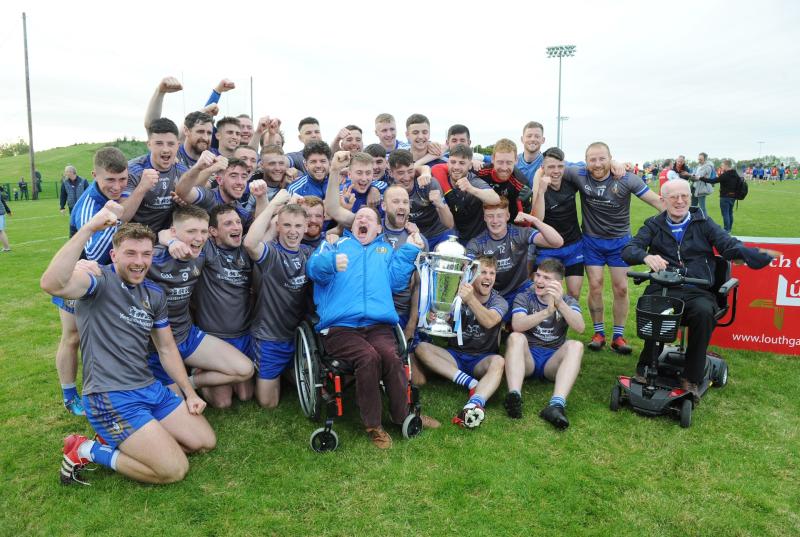 Finals are won in big moments. Naomh Mairtin know that as well as anyone. The Monasterboice outfit bounced back from two final losses in a row to claim their maiden Louth senior title over Ardee St. Mary’s on Sunday with a display of sheer efficiency and some well-timed power plays.

The Mairtin’s banked all that heartache bestowed upon them to learn how to win on the big day. They would make Ardee rue their missed chances down the stretch, while ruthlessly turning the screw in front of the posts.
Withstanding an onslaught on their goal and riding their luck at times, it is not even about performing for the Jock’s. For them it was about having enough scores on the board when tallied at the finish.
Ardee, it must be said performed quite well, their youngsters didn’t get dreaded stage fright and the contest was intense, the

Mairtin’s simply handled that final pressure much better. They didn’t let the spectacle get too far away from them and weren’t afraid to push on either.

It helped that Craig Lynch was exceptional in the goals for Monasterboice, he had a crucial penalty save in the first half on top of four massive stops throughout.

Up top, Conor Whelan swung the game with a blistering 1-1 in the now deemed ‘Championship’ quarter after half time and before the last water break.

Sam Mulroy was faultless from placed kicks. Eight from Eight. No tap over’s, all long range low percentage shots to compound Ardee’s misery and that economy of scores was the difference.

Fergal Reel changed his defence around to match up as best he could with an exceptional Mary’s attack. Mark Whelan and Conor Morgan got the jobs of picking up two players that have set the championship alight in Dáire McConnon and Ciarán Keenan.

Thom Sullivan vacated the number 6 spot to go back and mark Darren Clarke, with Conor Healy swapping out to a more suited wing position. John Clutterbuck was the big winner in these switches as the county wingback had the freedom of the park at stages down the left flank. He relieved Monasterboice at various stages for Mulroy to profit.

After a bruising opening stanza, Eoghan Callaghan opening the scoring with a delicate point. The few spectators at the ground were robbed of Callaghan’s attacking flair soon after. With Mick Fanning going off, they were forced to reshuffle again and Callaghan was switched on to Keenan.

Mary’s wing forward Conor Gillespie pointed a free after missing an earlier one and Kian Moran gave them their only lead in the game. Tom Gray, a member of last year's winning minor team, soon levelled.

Ardee then enjoyed their best spell on the back of a Stephen Campbell black card. They were rampant. Keenan and McConnon cut right through, only to be denied either side of Kian Moran saved penalty, Moran also missed the rebound.

Crushingly for Ardee, Monasterboice actually outscored them 2 points to 1. A fine Tom Jackson effort - he is one for the future and the now! Mulroy then found the range with three deathly free’s to make it 0-6 to 0-3 at the turn.

You could already feel Ardee’s challenge wilt at that stage, not so much the three point gap, but you felt they weren’t going to get the goal chances they needed to win again also.

This proved to be the case, Conor Whelan set the tone with Monasterboice’s only point from play in the second half. Mulroy quickly followed up to push the final firmly in their favour.

The ruthlessness of Whelan’s goal then, in the 40th minute, showed exactly how far the Jock’s have come. Clutterbuck drove forward to find Whelan, who is having his best season in blue, he couldn’t get in the starting team last year.

Whelan had a sniff of a chance but a deft dummy bought him enough space to fire into the net with his weaker right. It was punishing and it did exactly what Ardee couldn’t. Psychologically the showpiece was won there and then.

Paudy Clarke and Mark Fay came off the bench for Ardee and combined for three points but Mulroy kept keeping the scoreboard ticking with booming efforts. The closest Ardee came was a Liam Jackson penalty quickly followed up by Ronan Carroll to make it 1-11 to 1-9.

However Mulroy was in a pure state of zen when it came to free taking.

Gavan Mooney came off the bench and won a vital free around the middle and Mulroy relieved any pressure, he truly controlled the game, what a weapon to have in your arsenal.

With that hard earned game management, the final whistle blew and the long wait was over. Jocks finally have Joe. County board treasurer Aidan Berrill enjoyed the moment poignantly presenting the cup to one of their greatest, and the counties greatest servants, JP Rooney.