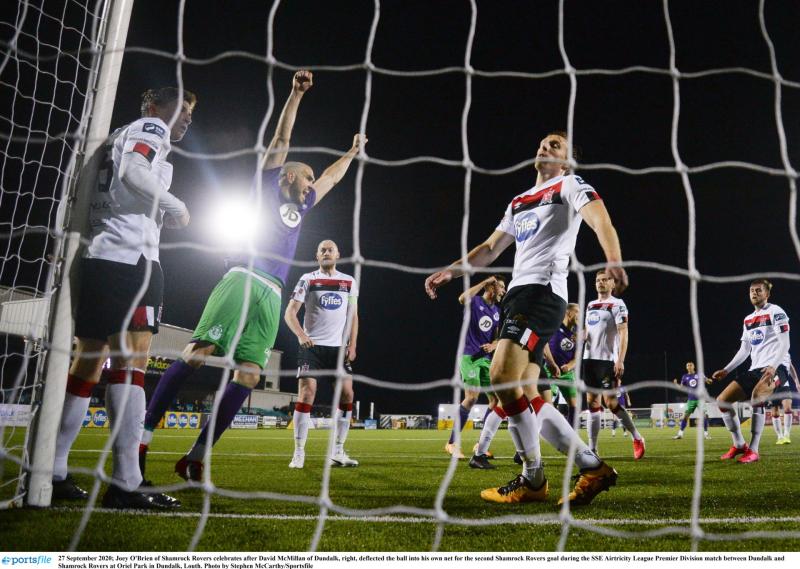 Before their crucial Europa League qualifier on Thursday night, Dundalk FC had to negotiate an SSE Airtricity League fixture against top-of-the-table Shamrock Rovers, who recorded a comfortable 4-0 win over a makeshift Lilywhites side in what was a grim showing at Oriel.

Dundalk were hoping to have this game pushed back to a later date in order to aid their preparation for the upcoming tie with KI Klaksvik, but any requests were seemingly ignored.

That decision, or lack thereof, forced Filippo Giovagnoli to ring the changes for Sunday’s visit of Rovers, with Chris Shields and Daniel Kelly the only players to have featured against Sheriff Tiraspol in Moldova the previous Thursday to be named in the team against Rovers.

In light of new government regulations, 100 randomly drawn spectators were permitted entry into Oriel Park on Sunday evening with strict social distancing rules being adhered to.

Rovers, who had the luxury of fielding a full-strength side, started brightly and had chances early on from Aaron Greene and Graham Burke, who hooked their efforts wide of the mark.

Former Dundalk man Ronan Finn forced a good save out of Aaron McCarey – making his second successive league start – after what was some good play by Rovers forward Greene.

Dundalk’s best chance of the game came just after the half-hour mark when Nathan Oduwa burst down the left flank, skipping the challenge of Lee Grace, before finding David McMillan, who was denied by Alan Mannus, but that was as good as it got for the Lilywhites.

The visitors took a three-goal lead into the half-time break after nine minutes of madness from Giovagnoli’s makeshift team. The first of which came on 36 minutes, with Jack Byrne bundling home from close range after what was some truly scrappy Dundalk defending.

Things went from bad to worse for Dundalk after Will Patching fouled Scales inside the area, with Aaron McEneff making absolutely no mistake from the spot to make it 3-0 at half-time.

The second half produced virtually nothing in the way of chances before Rovers compounded Dundalk’s misery on 83 minutes, with Byrne rounding McCarey before finishing from an acute angle as Dundalk suffered their first home league defeat since 2018.