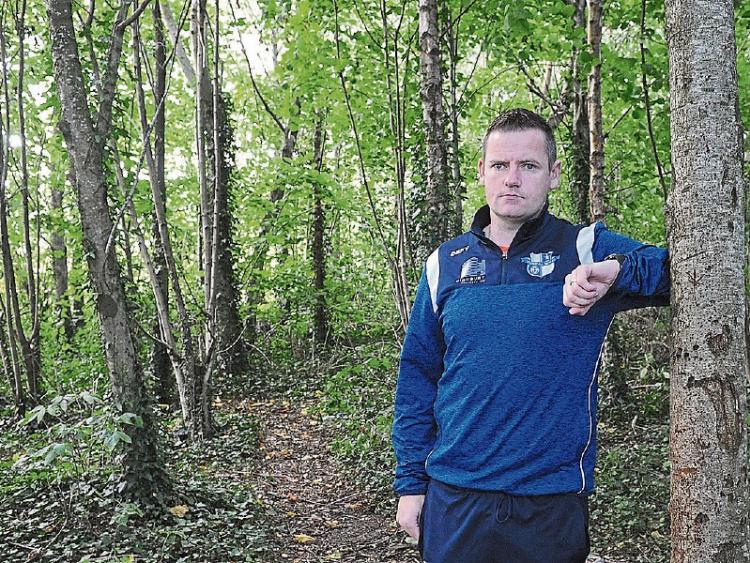 There has been an alarming increase in used needles being dumped in dense scrubland right beside the Muirhevna Mor Football Club’s pitch where hundreds of children train.

There are fears that it is “only a matter of time” until a child is injured by a discarded used syringe if the problem is not tackled.

Muirhevna Mor FC committee member Sean Dixon told how there has been a 10-fold increase of needles used by drug users being dumped in the “strip of no-man’s land” owned by the council between the club’s pitch and Tom Bellew Avenue in recent weeks.

Sean said that a designated club member takes turns to collect balls that have been kicked into the ditch as there is a real fear someone could get injured by a syringe when retrieving a ball.

And two club members were left shocked when they discovered a man who had overdosed on drugs in the ditch in broad daylight and rang emergency services.

Sean told the Democrat that the situation is frightening, and people fear that a child is going to be injured by a used, dumped syringe.

Muirhevna Mor FC committee member Sean said: “The increase of discarded used needles behind the pitch is 10-fold in the last three to four weeks.

“It is frightening the amount of needles dumped in the ditch behind the goals.

“It is a real concern as it is only a matter of time until a child is injured by one of the many needles lying around.

“The ditch behind the pitch is overgrown with bushes and unfortunately is a den - a perfect hideaway - for people using drugs as they are undercover and can’t be seen.

“They are just dumping their used needles and it is becoming a real issue – it is terrifying as it is only a matter of time that I child gets hurt.

“We have around 200 children and adults training with us and there are needles all over the place in those ditches.

“We had to fight to get land from the council to build the pitch, but they refused to give us the small strip of land that is about 10ft to 15ft between the pitch and the road.

“We would have used the land as a warm-up area for the players, but they were unwilling to give it to us and we now have limited space for warming up.

“Instead the council kept the land and planted dense thorny bushes which has created a perfect hideaway for drug users and is full of used needles that they dump after using them.

“It is a frightening situation, it is disgraceful.

“It is a real problem retrieving balls that are kicked into the ditch.

“None of the kids are allowed to retrieve balls and now one person usually nominates themselves on different occasions to retrieve the footballs.

“When the club loses balls in the ditch a designated person will retrieve them carefully as we are so fearful about what is there, and we want to prevent anyone getting injured by a discarded needle.

“But if something is not done it is only a matter of time until a kid gets injured by a used, discarded needle -it is a constant fear.

“If the council is not prepared to give us the land that we could utilise as a warm up area for players the least they could do is take out the dense shrubs that are creating a hideaway for drug users and just even plant trees spaced out that wouldn’t hide people taking drugs.

“At the moment there is no deterrent to stop drug users from using the no-mans land and the situation is getting worse by the week.”

Sean said that the problem has gotten so bad that two club members, while retrieving balls, discovered a man close to death in a ditch beside the football pitch on Friday September 11th after overdosing on drugs.

“Two club members were retrieving balls from the overgrown area recently when they discovered a man in the ditch behind the football pitch after overdosing and rang emergency services”, Sean said.

“This was in broad daylight at 4.30pm on a Friday afternoon with children in the vicinity.

“I dread to think that a child could have been confronted by this, it is terrifying.”

He told how the escalating drug use and dumping of needles in the dense strip of land beside their football pitch is undermining all the hard work everyone puts into the club.

Sean said: “We all work hard for the club and to build up the club’s reputation and having people using drugs and loads of used needles dumped near the pitch is just pulling us down.

“We have teams coming to play from all over the place and it is terrible that players and their families can see what is going on.

“We are the longest community project running in this area and we all work really hard to make it the best club we can and are really committed to what we do.

“It is very frustrating that there is a small group in the area undermining all the good, positive work that is being done.

“The issue has to be dealt with, if the council are not willing to give up that little strip of land the least they should do is remove the dense bushes to prevent people using drugs and dumping used needles in the area that is now a perfect hideaway for them.”

Local Sinn Fein councillor Kevin Meenan said that the problem of discarded, used needles in the Muirhevnamor area in general is also escalating with an increased number of syringes dumped in the local park and the disused Pitch n Putt facility in the community.

He plans to raise the issue at the next meeting of the Louth Drugs and Alcohol Forum this week, which is made up of elected representatives, an Garda Síochána, the HSE, Tusla, Turas, the Family Addiction Support Network and Louth County Council staff.

Cllr Meenan said: “There is a real problem in the area in general with an increase of used needles being dumped in the community.

“Numerous residents in the area have contacted me about the amount of used needles dumped in the park in Muirhevnamor and the disused Pitch and Putt.

“People are using the derelict clubhouse in what was once the Pitch and Putt in the community and there are hundreds of used needles discarded in the empty building.

“There is also a significant increase of dumped needles in the park and the little wooded walkways in the area.

“These are places where children are playing and where people are walking with their families.

“There are hotspots in the area where people are using drugs and discarding their needles and it has become a real problem.

“Parents are terrified that their child is going to pick up, fall on our step on a used needle, something has to be done about the problem.

“It is only a matter of time before a child is injured by a used, dumped needle if something is not done.

“I am going to raise the issue of needles being dumped at the Drugs Forum meeting this week to discuss and debate the problem and work on coming up with a solution and put a system in place to curtail the amount of drug users dumping their needles in public spots where children are playing in a park or playing football.”