Gerry Malone casts an eye over Dundalk’s Europa League exploits, Covid-19 and the ongoing issues at the FAI 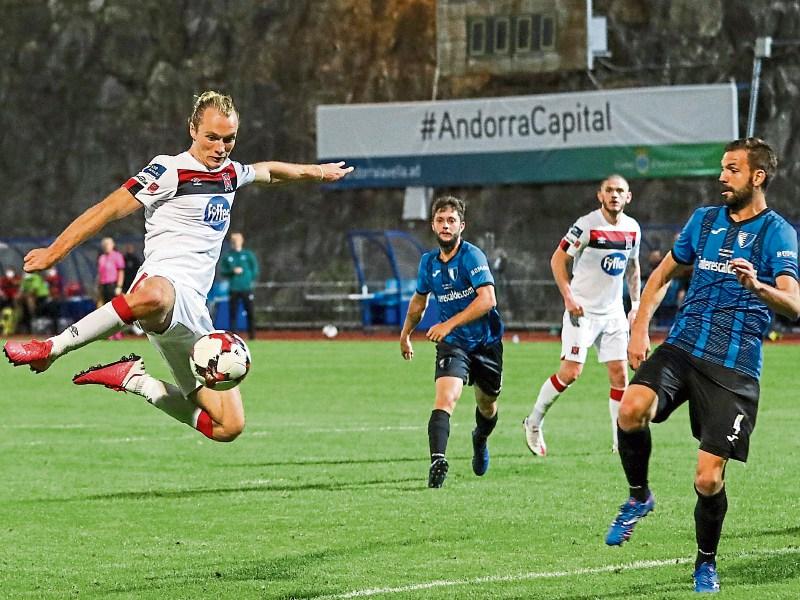 Dundalk are on their travels this week yet again when they take on Sheriff Tiraspol in Moldova away on Thursday in Round 3 of the Europa. League.

This comes after a great 1-0 win over Inter Club of Andorra last Thursday. A goal from David McMillan on 14 minutes gave Filippo Giovongoli's men a vital win and ensured an away meeting with Sherif on Thursday.

McMillan has earned a marvellous reputation of scoring vital goals such as the one against FH in Iceland in 2016 in round 1 of the Champions League Qualifiers. It was that goal that set up Dundalk's infamous great European run and ensured the Oriel park men would be the top side in Ireland for another three years.

McMillan got three goals against FH in the two legs and two goals against Bate Borrisov which sent Dundalk in to the group stages of the Europa league.

Now his 14th minute wonder goal earns Dundalk up to €300,000 and destination Moldova.

The win over Inter Club D'Escalades was expected by many but given the turmoil there has been at Dundalk this season it was great to get the win,

And to add to the credibility of the result was the fact Dundalk had to play the last half hour of the game with 10 men when Andy Boyle was sent off in a disgraceful decision by the referee.

Dundalk also got news this week that if they can get past Sheriff on Thursday that they would have a home game which would decide who goes in to the play off stages. They would be against KI from the Faroe Islands or Dinamo Tiblisi from Georgia.

Dundalk go to Moldova as underdogs. Sheriff are a fine team and so far are unbeaten at home this season. Dundalk boss Filippo Giovangoli knows he is up against formidable opposition on Thursday but is confidant.

Sheriff have won their last two league games emphatically and this has to be of concern to Dundalk. They are a club based in the Eastern Modovan City of Tiraspol.

They are based in the de jure unrecognised state of the Pridnistrovian Moldovian republic.

It's a break away state from Moldova. Yet they play in the main Moldovan league. The state is seen as the last outpost of the old Soviet Union.

Since then they have totally dominated Moldovan soccer winning the league a further 18 times. They have won 10 cups and8 super cups all domestic competition records .

Sheriff have reached the group stages of the Europa league on four occasions.

The above stats show the formidable side Dundalk play. But they can be beaten. However it will take a super human performance from Filippo's lads to get through.

Brian Gartland conceeds the game on Thursday will be a few levels up from last week's game against Inter.However he says Dundalk will go at it again with a plan.

He added they have players from all over the world, a nice stadium and terrific resources. He added that it really will be a tough game. But the former Dundalk skipper pointed. out that this is a year when anything can happen.

One legged ties have completly changed the complexion of the tournament. Big Brian says Dundalk's aim is to go to Moldova and raise their performance. And he says one way or another they aim to get through to the next stage of the competition.

It would be fantastic to see Dundalk go through. But it's just very hard to see it happen. Nothing would give me greater pleasure than to eat my hat if Dundalk were to advance.

On the domestic front Dundalk's game with Cork City at Turner's cross was called off to help the outgoing champions prepare for the game on Thursday.

It was a big difference from the FAI's stance four years ago when Dundalk were forced to play the FAI cup final ironically against Cork City having only returned 48 hours earlier after playing in a Europa league game away from home .

Dundalk got a very tough draw in the FAI cup for the quarter finals. They were drawn away to Bohemians at Dalymount park in November. It was the club's sixth away FAI cup draw in 7. Still it's winnable and Dundalk can get through to the last 4. Last time Dundalk played Bohs in the cup was in 2012 when a Mark Griffin goal put the Lillywhites through to the semi finals. Amazing that in the same year Dundalk just survived being relegated when they won the 2 legged play off against Waterford.

What annoyed me over the AC Milan game was that Dundalk's game in Andorra was all but ignored. Listening to RTE and Newstalk all the talk was about Rovers. Same in most of the papers. You would not even think Dundalk were playing in the same tournament that night. I know Milan was the plum game. But Dundalk should have got some attention .

It just reconfirms to me what I have always experienced. It's always Dublin First among the national media and the rest of the country a begrudging second. I’m not targeting this at the Irish soccer writers in the main. They are always balanced and fair. But it's the rest of the clueless national really Dublin media who can't see beyond Swords.

I got a lot of criticism for what I said. I do not care. What I said is true.

The Covid 19 virus continues to play havoc with our country .Lives are being lost and the number of cases goes up alarmingly .

On Friday came news of 3 deaths caused by the virus at Daisy Hill Hospital in Newry. 11 patients were infected as were 21 staff.

The virus has struck in 7 Dundalk schools officially so far.I believe this figure is higher. At any rate on a human and economic level this virus is destroying the corps of our society.

All sports have been deeply effected .GAA, Rugby and soccer have taken a massive financial hit.

Last week the Interim Chief Executive of the FAI told an Oireachtas Committee hearing and expressed serious fears for the future of the league here . He estimated the pandemic has cost the FAI 19 million euro. He also warned of serious trouble ahead that without fans the game would be in serious trouble .

Mister Owens had the simple and easy message that clubs are not going to survive around the country without fans.

Clubs rely entirely on gate receipts. He said that clubs who qualify for Europe will have a stronger chance to survive. Those that do not have a bleak future.

The outgoing Interim CEO has highlighted a serious point that if this virus continues to strike at the heart of our society clubs could go under. This will happen. Many of us including myself have no idea at just how much trouble clubs are in. And in the short to medium- and likely the longer - term the virus is not going away.

The Watch LOI streaming service had a very low uptake and this in itself poses further problems.

Jonathan Hill was appointed the new FAI CEO this week. Mr Hill's appointment looks set to be a good one. He was commercial manager of the English FA from 2004 to 2019.

His salary is greatly reduced from that of former CEO John Delaney and grosses at around €207,000.

The book Champaign Football is a must read for everyone and what went on in the FAI under John Delaney's reign, Author Mark Tighe has done a fantastic job and must be given great admiration after unveiling what went on.

The salaries of Trapatoni, Martin O'Neill and Mick McCarthy were outrageous - each bring paid around one million euro a year. O'Neill and McCarthy got nice compensation for being let go the figure going close 1.1 million euro for the two of them.

Add to the fact that Mick McCarthy is entitled to another one million euro if Ireland were to reach the European championship finals that take place next season under Stephen Kenny.

The total pay off to Martin O'Neill and his back backroom staff came to 1.6 million euro.

Stephen Kennny is currently deferring 50 per cent of his salary under the terms of a FAI Cost cutting package introduced last May for all FAI staff earning more than 102,000 euro.

Kenny is most definitely not part of the champaigne soccer era connected with Delaney. It ties in with the typical amount of money that most senior international managers get. Not the crazy money being paid to Martin O'Neill, Mick McCarthy and Giovanni Trapatoni.

Best of luck to Dundalk next week in Moldova. We will all be hoping for a win which would bring us closer to the promised riches of the Europa league group stages.

These are dangerous times with the virus knocking about .There are also many other factors that can endanger us.

And by the way I believe that Bill Hullsizer is staying on as chairman of Dundalk FC. That story is for another day. But I do wish him the very best. And when he is back in Dundalk I would like to interview him on all that has gone on at the club this season. Now I think that should be very interesting.