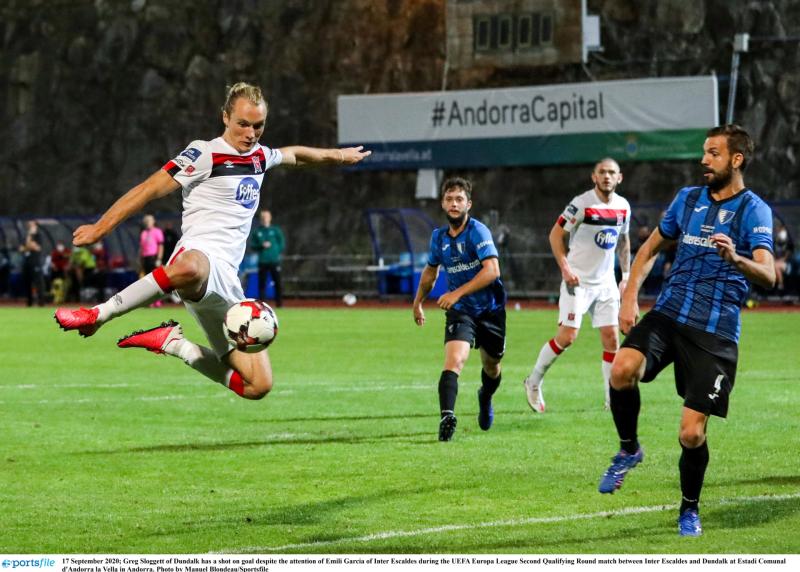 Dundalk FC will face Sheriff Tiraspol in the Europa League third qualifying round next Thursday night after overcoming Inter Escaldes this evening at the Estadi Comunal.

As expected, Dundalk dominated against the semi-professional Andorrans and had the game’s first chance through David McMillan, who flashed a header wide on eight minutes.

Dundalk, wearing all white, eased any potential nerves on 14 minutes when McMillan finished beyond Josep Gomes after receiving a lovely through ball from Michael Duffy.

The Lilywhites really should have had more goals after that, with the impressive Duffy drilling an effort wide after he had got the better of a couple of Inter Escaldes defenders.

Greg Sloggett, who scored against Shelbourne in the league last week, then fired over from about 25 yards, not long before Seán Murray saw his curling effort parried out by Gomes.

Dundalk were now looking relentless and Murray, who enjoyed a really good first half display, seemed the most likely to kill the game off before half-time. After some good work out on the left from Duffy, he saw his effort well saved by Andorra international Gomes.

Then, in first half stoppage-time, his free-kick from just outside the box crashed off the post.

Inter adopted a physical approach throughout the contest, but their semi-professional status, coupled with a lack of fitness most certainly amplified that in the second period.

Murray saw his deflected effort sail wide, while McMillan had what looked to be a blatant penalty appeal waved away when he was elbowed inside the area by veteran Ildefons Lima.

Belarusian referee Viktor Shimusik didn’t shy away from reaching for his pocket after that and Andy Boyle was, rather inexplicably, sent off for a second yellow just before the hour.

Despite the numerical disadvantage, Brian Gartland, from Duffy’s free-kick, had a header tipped over by Gomes with the ten men of Dundalk now anxious to make the game safe.

However, it was Inter that were looking the more likely to take the tie into extra-time in the final 15 minutes, with Jordi Betriu’s effort from the right fizzing inches wide of the post.

The unmarked Genis Soldevila headed over in the closing stages, while Dundalk stopper Gary Rogers had to get down well to save from another Soldevila effort in stoppage-time.

However, Dundalk saw out what was a professional, if not spectacular job and march into the third qualifying round against the Moldovan champions Sheriff next Thursday night.