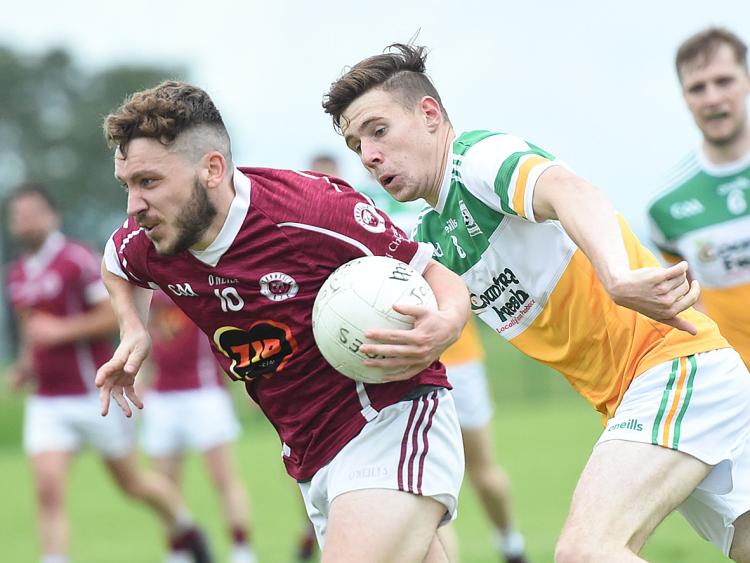 St Patricks finished top of Group 1 thanks to a comfortable seven-point victory over O Raghallaighs at Darver on Sunday night.

The result means that the Drogheda side miss out on the knock-out stages with Geraldines joining the Pats in the quarter-finals.

The Lordship men made a blistering start and after Cathal Grogan opened the scoring with a point, Eoin O’Connor fired in the first goal of the game before Jack Murphy added a point to make it 1-2 to no score after two minutes.

Ben Rogan got the O Raghallaighs off the mark but the Pats didn’t show any signs of easing up as Ciaran Murphy pointed and O’Connor added his second goal on ten minutes to open up a 2-3 to 0-1 lead.

With Barry Flanagan in good scoring form, the O Raghallaighs landed the next four points before Jack Murphy got one back. The Drogheda men finished the half on the up as Ben Rogan hit the net from a penalty to cut the gap to 2-6 to 1-6 at half time.

Darren O’Hanlon was among the points as the Pats added the first scores of the second period to reclaim control with a seven point cushion.

Although the Drogheda side battled to get back into the game through Flanagan and James Morgan, the Pats never looked like surrendering the lead despite losing Dessie Finnegan to a red card late on. Four points from Cathal Grogan in the final quarter helped see the Pats hold out for a comfortable victory.

A first half goal blitz set up St Marys Senior Championship quarter-final berth as they proved too strong for Mattock Rangers in a high-scoring encounter at Darver on Sunday afternoon.

Conor Gillespie, Daire McConnon and Darren Clarke all found the net inside the opening 25 minutes to put their side firmly in command, while a fourth goal just after the restart from Ronan Carroll put the game beyond any real doubt.

Mattock played their part in a lively encounter as they finished with an impressive tally of 20 points, but just couldn’t get the goals required to threaten the Marys advantage. As a result the Collon men finish bottom of the group while Newtown Blues advance along with St Marys.

Cathal Fleming had the first score of the game before Darren Clarke levelled from a free soon after, and with the next four points shared, the game was evenly balanced at three points apiece after 10 minutes.

The Ardee men then stepped up the pace and they added the next four points without reply before Conor Gillespie scored the first goal of the game to put his side 1-7 to 0-3 ahead.

Mattock responded well to the challenge and with David Reid and Fleming on the mark, they cut the gap to four points.

However, the Marys moved quickly to snuff out that revival and Daire McConnon fired in the second goal and although Reid replied immediately with a point, the Ardee men found the net again through Clarke to ease into a 3-10 to 0-9 lead at the break.

Mattock needed a strong start to the second period to have any hope of making the quarter-finals but within two minutes their hopes were all but over when Carroll scored his side’s fourth goal to open up a 12-point gap.

The Collon side did have the better of the remainder of the second half and outscored their opponents by eleven points to five. However, the Marys were always in control and keeping their goal intact was crucial in seeing them earned a deserved win.

A late goal from John Clutterbuck saw Nh Mairtin snatch victory over St Mochtas to finish top of Group 2 in an entertaining contest at Darver on Sunday afternoon.

The dramatic strikes was enough to hand the Jocks their second win and but the consolation for the Mochtas is that they also advance to the last eight at the expense of Dreadnots on score difference.

In what proved to be a close affair throughout it was St Mochtas who were first off the mark through Ciaran McMahon, only for Sam Mulroy to reply with two points at the other end.

After Ciaran Byrne drew the sides level the Mochtas had a chance to land the first major blow from the penalty spot only to see Philly Englishby’s effort tipped over the bar by Craig Lynch.

However, they earned a second penalty almost immediately and this time Declan Byrne made no mistake to put his side 1-3 to 0-2 ahead at the end of the first quarter.

Two further points from Mulroy brought the Mairtins back into the game and it remained evenly balanced to the half time whistle. Conor Whelan and Clutterbuck were also on target for the Monasterboice side but efforts from Declan Byrne and McMahon had the Mochtas ahead by 1-6 to 0-8 at the break.

Sam Mulroy levelled just after the restart and his side looked to be taking charge when points from Tom Gray and Eoghan Callaghan helped them move ahead by 0-12 to 1-7 approaching the end of the third quarter.

However, the Mochtas responded in impressive fashion and kicked the next four points through Declan (3) and Ciaran Byrne. That looked to be enough to secure the win but Clutterbuck had the final say as his goal snatched a dramatic win for the Mairtins.

St Josephs advanced to the quarter-finals of the Louth Senior Championship when they recorded a three-point win over neighbours O’Connells on Sunday evening.

Ahead of the game, the Bellingham side needed a six point winning margin to qualify for the quarter-final and the Joes needed a win or a draw to top the group. The outcome means that the O’Connells finished bottom of the group while Dundalk Gaels advance as runners-up.

The O’Connells settled and it was Robert Quigley who opened their scoring from a 13m free on six minutes. The Joes responded with an excellent score from Jack Mulligan who powered through the O’Connells defence to make it 0-4 to 0-1 on ten minutes.

Bernard Osborne pulled a point back before  Covid19 protocols came into play when due to a player injury on 25 minutes and the teams experienced the unprecedented situation of switching onto the main pitch.

The O’Connells settled quickest and levelled through Salem Rifaie and Paul McKeever, but a late score from Gabriel Bell sent the Joes in leading by 0-6 to 0-5 at the break.

The Joes started the second half with two quick points from Ben Collier and Conall McCaul only for Niall Conlon to respond at the other end. Joes edged the lead out to three again when Craig Doherty floated over a fine score on 41 minutes with Dean Corrigan on target for the O’Connells.

Following the second water break Alan Quigley hit a superb point under pressure while on 47 minutes Killian Staunton found himself through on goal and his rising shot cleared the crossbar to put the Joes ahead 0-11 to 0-7.

Stuart Osborne pulled on back for the Bellingham side but Jack Mulligan and McCaul were on target at the other end to put their side 0-13 to 0-8 clear. The O’Connells fought to the end and pulled back two late points but the Joes held out for the win.