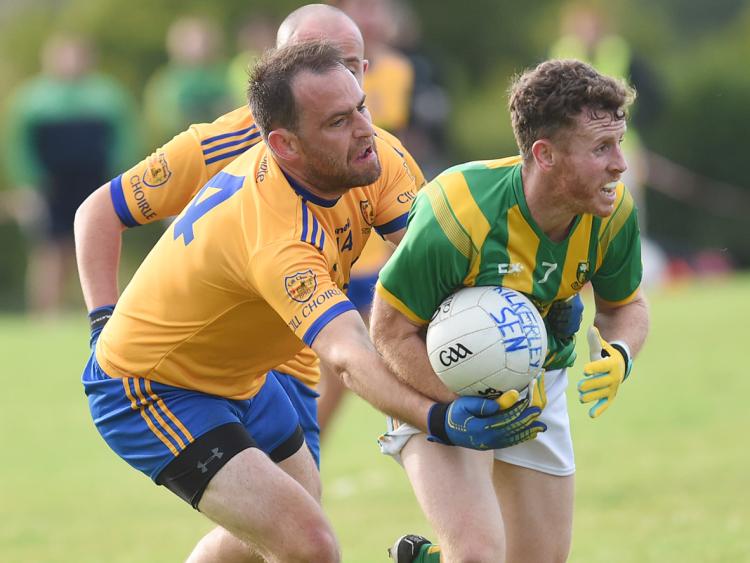 Hunterstown Rovers booked their place in the Intermediate Championship quarter-finals after scoring a four-point victory at Darver on Saturday afternoon.

Ryan Burns scored the only goal of the game from the penalty spot after just two minutes and that proved decisive as the Mid Louth men chalked up their second win of the campaign.

The result means that Cooley will now take on Young Irelands in the final Group 1 outing to decide who will join Hunterstown in the knock-out stages.

Burns certainly made his mark on this game as after his successful penalty he added three successive points to see his side lead by 1-3 to no score at the end of the first quarter.

Cooley got their first score of the game through Emmet Rogan and got themselves back in contention when Brian White and Michael Carron pointed. However, Rovers finished the half on the up with points from Ryan Ward and Burns to lead by 1-5 to 0-3 at the break.

The peninsula side made a bright start to the second half with scores from White and Michael Rafferty before Burns and Rafferty exchanged scores to leave Rovers ahead by 1-8 to 0-8.

The next four points were shared but Cooley were unable to get any closer as Padraig Matthews and David Finn fired over to secure victory despite a late point from Aoghain McGuinness.

St Brides eased into the quarter-finals of the Louth Intermediate Football Championships when they proved too strong for Roche Emmets at Darver on Saturday afternoon.

Despite a promising start, Roche were unable to match the Knockbridge men who were inspired by a brilliant display from Kevin Hearty who finished the game with a tally of 2-5.

The Faughart side had the wind in their backs in the opening half and started with points from Dan O’Connell and Glen Stewart and although Sean Marry opened the Brides account, Barry O’Hare landed a ‘45’ on six minutes to put his side 0-3 to 0-1 in front.

However, that was as good as it got for Roche as St Brides took over the game. Hearty got his first point on seven minutes and scores from Marry (2), Andrew Smyth and Ciaran Deane had their side leading by 0-6 to 0-3.

Kevin Callaghan score the last point of the half for Roche on 20 minutes but the Knockbridge men continued to turn the screw as points from Marry, Smyth and Patrick Reilly had them leading by 0-9 to 0-4 at the break.

Dan O’Connell pulled on back with the first score of the second half but a Roche revival into a strong wind never looked likely and with the help of scores from James Costello, Reilly and Hearty the Brides reeled off five in a row to lead by 0-13 to 0-5.

Hearty put the issue beyond any lingering doubt with a goal on 45 minutes and followed up with a second on 55 to seal an impressive win.

Roche will now face St Kevins in the final game to decide who will join the Brides in the quarter-finals.

Kilkerley Emmets got their Intermediate Championship campaign off to a winning start with victory over Clan na Gael in an entertaining encounter at Darver on Saturday evening.

The Clans went into the game boosted by their big win the Plunketts in the first game but in a high-scoring encounter they came up against a Kilkerley side who just had the edge throughout and in the end secured a deserved win.

It was the Dundalk men who had the wind in their backs from the first whistle and they looked to take full advantage as Billy Smith landed the first three points of the game, only for Kilkerley to hit back with scores from Tadgh McEnaney (2) and Shane Lennon to level after ten minutes.

Although Mark McGeown edged the Clans in front, Kilkerley were beginning to get on top and McEnaney and Lennon (3) had their side 0-7 to 0-4 in front.

The game turned in Clans favour once again as Robbie Curran (2) and McGeown (2) had them back in front, but the momentum shifted back to the Emmets and they went in at the break leading by 0-11 to 0-8 thanks to scores from Sean Hand, Lennon (2) and McEnaney.

Despite facing into the breeze in the second period, the Clans took the game to Kilkerley and when Conall McKeever pointed on 37 minutes his team trailed by just 0-12 to 0-11.

The Emmets responded well to the challenge and points from Ewan McEnteggart, Lennon and McEnaney, they moved 0-18 to 0-12 clear on 50 minutes. That proved to be the decisive spell of the game as despite the Clans hitting back with points from Billy Smith, it was McEnaney who had the final saw with three late scores to seal victory.

Late points from Conor Finnegan and Terry Kelly saw Sean O’Mahonys get their Intermediate Championship campaign off to the best possible start as they edged home against St Fechins at Darver on Saturday night.

The Termonfeckin side went into the game on the back of their win over Glen Emmets the previous week, but in the face of a typically spirited O’Mahonys display they fell just short on this occasion.

The Fechins began the game on the front foot with a point from Ryan Walsh to get them off the mark, but the Dundalk side proved they were up for the fight as they levelled through Ben McLaughlin, before Stephen Kilcoyne (2) and Thomas Rice had them leading by 0-4 to 0-1 after ten minutes.

Scores from Walsh and Ronan Holcroft got the South Louth side back into the game but the O’Mahonys replied through McLaughlin and Fisher at the other end to lead by 0-7 to 0-3. However, the Fechins rallied with points from Walsh just before the break to cut the gap to two.

The green-and-whites continued to dominate at the start of the second half and levelled through Eoghan Duffy and Holcroft before the latter edged his side in front at 0-8 to 0-7 at the three-quarter mark.

The Termonfeckin side looked to be moving into a winning position when Matthew Flanagan’s point had them 0-10 to 0-8 clear with five minutes to play. However, the O’Mahonys dug deep and got back on terms before Finnegan and Kelly landed the last two points of the game to secure the victory.