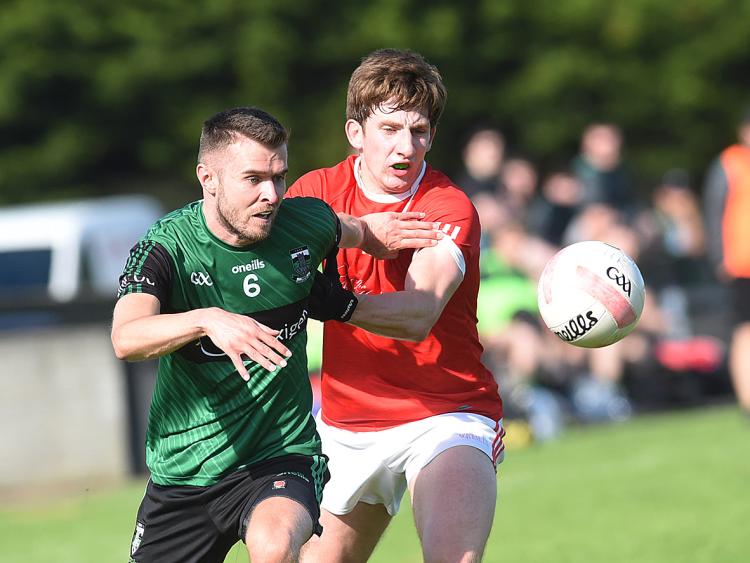 Clan na Gael put their disappointing season form to one side as they started the Intermediate Championship with an impressive victory over Oliver Plunketts at The Grove on Saturday evening.

The Dundalk men, who have been hampered by a lengthening injury list, haven’t enjoyed the best of fortunes since the season restarted, but they came good when it mattered in this Group 3 encounter.

Not only the did Clans claim the two points on offer, but their 14-point margin of victory makes them strong favourites to advance to the knock-out stages.

Billy Smith, who finished with 2-6 to his name, led a very impressive attacking display from the winners while there were also goals from Mark Newell, Conall McKeever and Ciaran O’Connor.

The first half goals came from Newell and McKeever as the Clans went in at the break with a healthy 2-5 to 0-6 lead at half time.

Dean Carolan and Conor Early battled to keep the Plunketts in contention as they finished with four points apiece, however, they just couldn’t get through against a stubborn defence for the goals needed to get back into contention.

At the other end, the Clans continued to show their eye for goal as Smith scored two second half goals along with another from substitute Ciaran O’Connor to seal a comprehensive victory.

Hunterstown Rovers had to hold off a late rally from Young Irelands before securing victory in Group 1 of the Intermediate Football Championship at The Grove on Saturday afternoon.

The Mid Louth side appeared to be cruising when they went into the final quarter with a six point lead only to see the Dundalk men battle back to within a point. However, in the end they did just enough to come out on top.

Hunterstown appeared to be in the mood from the opening whistle and scores from Ryan Burns (3) and Paul Carrie had them leading by 0-4 to 0-1 with the Young Irelands reply coming from Peter McStravick.

The Irelanders were more competitive in the second quarter and points from Dermot Mone and James Prendergast saw them cut the gap to 0-5 to 0-3 at the break with Burns adding his fourth of the half at the other end.

After the first four points of the second period were shared, Hunterstown struck a significant blow when Paul Carrie scored the only goal of the game on 40 minutes. Despite losing Ryan Ward to a second yellow, Rovers looked to be comfortable when an Alan Landy point at the start of the final quarter had his team leading by 1-9 to 0-6.

The Dundalk side gave themselves hope with two efforts from Prendergast before Burns replied to extend the gap to 1-10 to 0-9. The Irelanders continued to push forward and added scores from Prendergast (2) and McStravick to leave the minimum between the teams.

However, they were unable to complete the comeback as Hunterstown held out for victory.

The Fechins would have been seen as the favourites going into this match and they didn’t disappoint by recording a six-point win over Glen Emmets at the Gaelic Grounds on Saturday night.

The teams exchanged points up to the first water break where they had three points each with the Fechins scoring through Ryan Walsh, Eoghan Duffy and Ronan Holcroft, in reply to efforts from Conor Grimes (2) and James Butler, but the Tullyllen men could only manage one more score in the first half.

The midfield combination of Bevan and Jamie McDonnell were most impressive with Paul Matthews playing on the wing also covering plenty of ground. This helped the Fechins clock up six points with great team work with the ball being worked up from the back line. They also passed up the chance of two goals with one going wide and the other saved by the keeper. The six scores were shared by Paul Matthews, Ronan Holcroft, Eoghan Duffy and Joe Corrigan (3) to leave their side 0-9 to 0-4 ahead at the break.

The Emmets came out of the blocks with a point at the restart from Butler, but they were unable to build on that as Walsh, Holcroft, and Matthew Flanagan were all on target to stretch the advantage to 0-14 to 0-7 after 45 minutes.

The result was put beyond doubt when Eoghan Duffy fisted a Walsh free to the net soon after.

The Emmets found to the end and were rewarded with a late goal from Andrew Mooney and three unanswered points from Grimes (2) and Mooney.

A Ciaran Deane goal early in the second half proved decisive as St Brides got their Intermediate Championship campaign off to a winning start.

The Group 2 encounter, played in fine conditions at Ardee on Saturday evening, proved to be an entertaining affair with the Knockbridge side just doing enough to come away with victory.

The teams were evenly matched in the opening quarter in terms of possession but it was the Brides who made the most of their chances with points from Ciaran Deane, James Costelloe and Kevin Hearty to lead by three points.

The Kevins got off the mark through TJ Doheny and James Harper but a brace from Sean Marry ensure the Knockbridge men were leading by 0-5 to 0-2 after 20 minutes.

Before the interval, Marry and Cian Callan exchanged scores to leave the Brides with a 0-6 to 0-3 advantage.

The Knockbridge men built on that lead early in the second half as Deane’s goal and points from Paddy Reilly and Sean Brennan saw them move 1-9 to 0-4 clear after 40 minutes.

It was looking comfortable for their side at that stage but the Kevins refused to give up and with Cian Callan, Lee Crosbie, Dylan Maher and Seanie Crosbie on the mark, they cut the gap to 1-10 to 0-9 with four minutes to play.

However, they couldn’t find their way to the Brides goal and a late Sean Marry point sealed victory for the Knockbridge men.