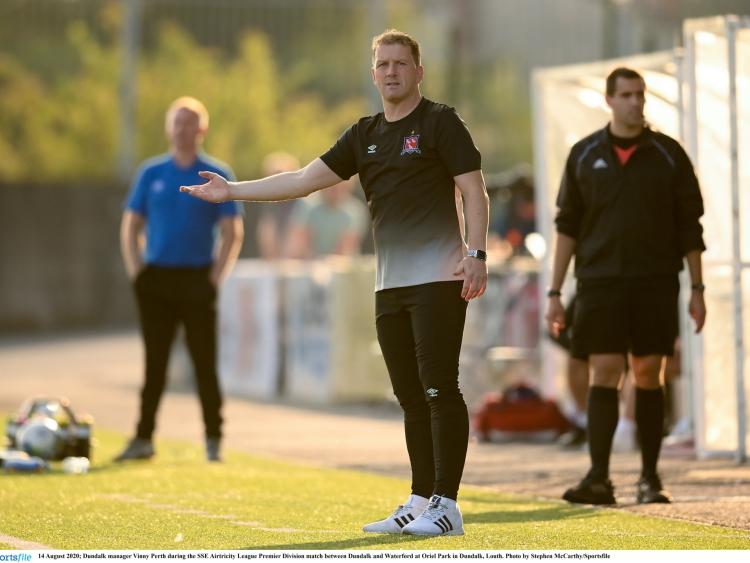 Due to Covid-19 restrictions, the one-off match against the Slovenian champions will be played behind closed doors at the Szusza Ferenc Stadium – located in the suburbs of Budapest – because Slovenia hasn’t been included on the Irish government’s ‘green list’.

The game could go to extra-time or penalties if required and a win for Dundalk would set up a second qualifying round tie against either Molde (Norway) or KuPS Kuopio (Finland) at Oriel Park next week. Concurrently, a defeat for The Lilywhites would see them drop into the second qualifying round of the Europa League, for which the draw falls on August 31.

Wednesday will mark the seventh consecutive year that Dundalk have participated in European competition and of the 24 senior players currently at the club, nine remain from the historic run to the Europa League group stages four years ago. Vinny Perth will be hoping to draw on that experience against a Celje side who are debutants at this level.

In fact, the Slovenians haven’t even featured in Europe since 2015 when they were comfortably knocked out of the Europa League at the first hurdle by Polish outfit Slask Wroclaw. You have to go back even further to find Celje’s last win in Europe – that was a 12-2 aggregate success against FK Belasica of Macedonia in the UEFA Cup qualifiers in 2003.

Despite their lack of experience, Celje should not be taken lightly. After all, they’ve just won a Slovenian League which includes NK Maribor, who themselves are no strangers to Champions League group stages, and Olimpija Ljubljana, where current Dundalk winger Nathan Oduwa was part of a side that won the Slovenian League and Cup double in 2018.

None of the Celje players have yet been capped at senior level by their respective countries, but their star man is no doubt Croatian U21 international forward Dario Vizinger, who bagged 23 goals in 35 appearances in 2019/20. Matjaz Rozman was recently voted the best goalkeeper in the Slovenian League; Defender Zan Zaletel looks to have a promising future in the game; Player of the year Mitja Lotric should create openings for the deadly Vizinger.

Celje’s season finished on July 22 and the new campaign had been due to commence last Wednesday. However, confirmed cases of Covid-19 at three different clubs in Slovenia has resulted in the season’s start being delayed. This means that Dundalk, albeit on a poor run of form domestically, could take advantage of the fact that by the time they face Celje, the Slovenian champions will have gone exactly four full weeks without a competitive game.

On the team news front, Cameron Dummigan is out with an ankle injury while John Mountney and Andy Boyle are rated doubtful and will face late fitness tests to assess their muscle injuries and will be given every chance ahead of kick-off.

On Saturday, it was announced that the full match will be broadcast live on RTÉ television.