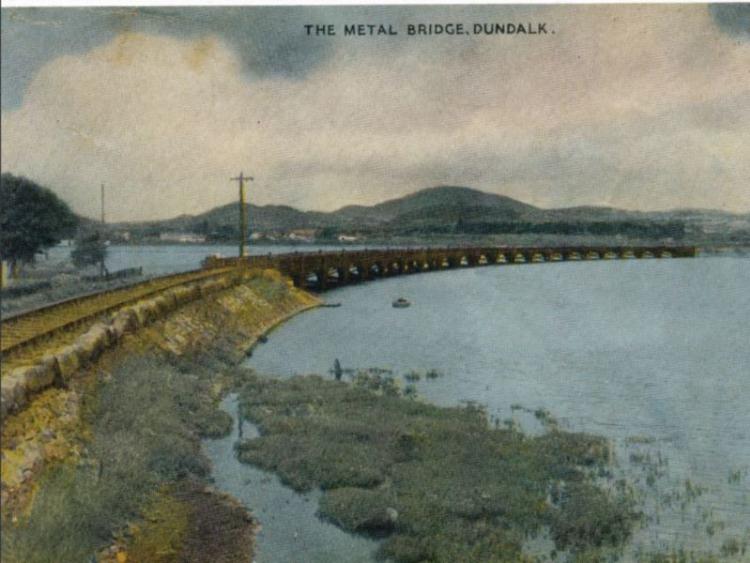 People of my generation and younger have been moving around the Town more frequently since some of the Covid restrictions have been lifted. Many have been just walking around and, some of a slightly younger age, cycling. The result, I believe, is that locals have begun to notice interesting things that they might have missed in times of busier road traffic!

The Quay area and out along the Navvy Bank to Soldiers Point has become a popular part of Dundalk to have a stroll and some of my friends have asked me about old buildings in that part of Dundalk. Two buildings along Quay Street that seem to have been more noticed than others are the old Greenore Railway Station and the relatively small stone building facing up Peter Street which has been very well restored fairly recently as a dwelling house.

One could write a book about the Railway Station which was built in about 1870 and I hope somebody will eventually do so. Unfortunately, it has become a bit dilapidated recently but, I am informed that it is about to be opened up again as some sort of a furniture sales room.

The second building is, in my opinion, even more interesting as an integral part of the history of the Harbour and Town. It was built about 1850 as a Constabulary Barrack at the time when the R.I.C. policing in Ireland was becoming better organised. In 1852 the police in Dundalk moved from Crowe Street where they had a barracks opposite the Old Jail, which closed about that date, to a headquarters at the junction of Anne Street and Dublin Street. About the same time they opened two smaller stations, one in Bridge Street and the other in this new building at the quays. I really do not know all that much about the Constabulary Barrack at Quay Street, other than that I read somewhere that it was staffed by a Sergeant and two constables but it must have been pretty busy back in the 1850s when ships were coming into the Port from all parts of the world and, of course, the Military Barrack was just up Peter Street. The result was that the pubs in the area were busy at the weekends and one old resident of Barrack Street once told me that part of the district was known as 'Hell's Kitchen' where soldiers and sailors clashed in disputes over 'women and liquor'. The Sergeant in charge lived in the barrack with his family and most of those who held that rank must have been something of a cross between a law enforcer and a peacemaker. At any rate, I have been told that the last Sergeant in charge was very well liked by the local people who were sorry to see him go when the barrack was closed about the time of the Truce in 1921.

Another old building in Quay Street that used to fascinate me when I worked in Connick's Coal Office in Quay Street in the early 1950s was one which the locals called 'The Lodge'.

It was a ruin by that time but it must have been a fairly grand residence at one time as I remember it had two pillars holding up a porch, which was a fairly unusual feature of that part of Dundalk of the period.

I had thought that it was owned by a Robert McCleanaghan who had a large chandeliers store about where St. Gerard's Square was built in 1939. McCleanaghan was a pretty influential businessman in the Port of the nineteenth century.

Charlie McCarthy, however, tells me that I was mistaken and that 'The Lodge' was built by a man named Duffy who lived there with his family. He must have been Charles A. Duffy who, according to Tempest's Annual of 1890, was a Harbour Commissioner and, according to Charlie, founded the well known Dundalk building firm of Duffy Brothers. Apparently he built most of the larger houses in Quay Street, including the former Harbour Offices.

Duffy, however, held a far more interesting and important office and he was some sort of a Vice-Consul for the British Government at Dundalk Harbour.

In this position he could, apparently, issue passports to sailors who came here from all parts of the world and, no doubt, represented foreign governments in the local courts and have had some influence over policing in the Port.

Hence the name of the old house, now long demolished, which was, in fact, a Consular Lodge which held an important diplomatic status.

The area around the old Constabulary Barrack was also very important because it was a place where many people from the hinterland of Dundalk assembled to book sailings through the Port of Liverpool to all parts of the world. Padraic Ua Dubhtaigh, in his 'Book of Dundalk', writes that --- 'The local Steampacket Company, established in 1837, was for a long period the mainstay of the Port. Mr. Neal Kelly, who was prominent in trading affairs, had a large share in the enterprise'.

Ua Dubhtaigh adds that ' prior to the establishment of the Steampacket Company, a cross-channel service was provided by the St. George's Packet Company of which little is known'.

A rival steampacket was set up in 1855 by local merchants and, for a time, there were clashes between the agents of both companies but, in 1858, peace was restored when the two companies amalgamated to become the Dundalk and Newry Steampacket Company.

The shipping company became the British and Irish Steam Packet Company in 1926 and sailings continued from it to Liverpool and Glasgow for many years.

There is a long history of movement of people and livestock through the Steampacket Quay, as it was known, and, perhaps, some time in the future this area might again become a great centre of commerce for Dundalk and North Louth?