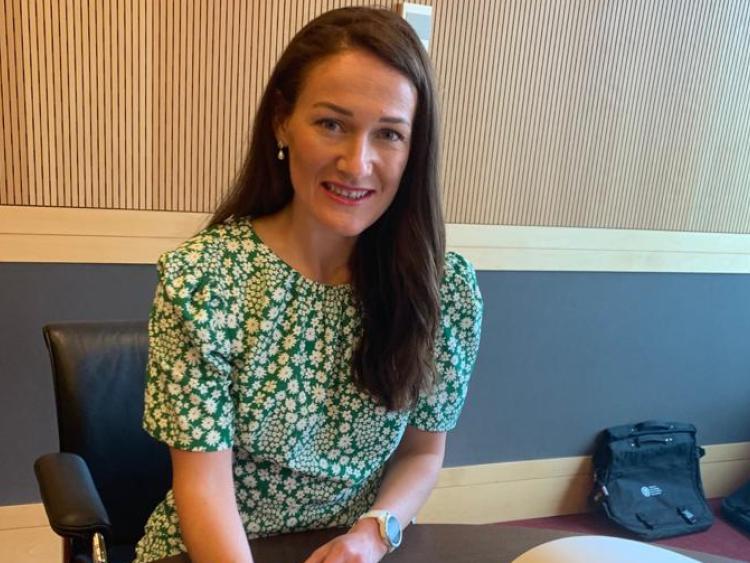 Erin McGreehan has had a hectic few days since being nominated to the Seanad by new Taoiseach Micheal Martin on Saturday.

But, after her first appearance at the Convention Centre in Dublin (the de facto Houses of the Oireachtas for the time being) yesterday, she found time to talk to the Democrat about her remarkably quick rise through the ranks, from first-time elected Fianna Fail local councillor in May 2019 to Senator in a little over 12 months, and how politics and a sense of public service has been a part of her life for as long as she can remember.

“I was named after Ireland, and as a young girl I believed I was named after these Houses (Oireachtas) and I was meant to be there someday. I guess I was correct,” she says when talking about how she used to “stay up late to watch the Oireachtas Report and was in absolute awe and amazement of the proceedings.”

Home is clearly important to McGreehan. She believes the opportunities she has been given were hard-won while growing up during the “hard times of the 1980s”.

“I am a product of fair access to education. I received an education in small rural schools in my own community and then was lucky enough to receive a grant to go to National University of Ireland Galway and then onto University College Dublin. I succeeded beyond my expectations for a girl that came from a farming family like so many families who struggled through the hard times of the 1980s.”

From Cooley, McGreehan has a unique perspective on the challenges facing the border area, not just at present (Brexit), but historically too: “I no longer travel to my neighbours in Newry or elsewhere and hear that there is a bomb scare at Carrickarnon or in Dundalk, Armagh or Newry. This peace was achieved through politics and political dialogue.”

But Brexit is creeping coming back onto the agenda. A deadlock in talks does not bode well.

“In six months’ time the transition period comes to an end and there has been no progress on the negotiations between the UK and the EU. This is very worrying for our locality,” says McGreehan.

Appearing at the Seanad on Monday must have been a remarkable moment, both personally and professionally, McGreehan says it was a “huge honour” and she’s “absolutely delighted” at her nomination.

But the reality of the role and the “huge privilege” comes with an expectation. She’s representing her county now on a national stage. And, with Fianna Fail not having a sitting TD from Louth, she’s the party’s only local representative on such a platform.

“This county is facing many threats and challenges,” she agrees. “It is my responsibility and privilege to raise these issues in the Seanad and with the Ministers and to push for Louth at all times. Issues such as the costs of the Covid pandemic – not just financial cost, but the impact on mental health and general health of people also.”

She certainly seems to be well-liked within Fianna Fail locally too, with Andrea McKevitt, the party's constituency delegate to the Ard Comhairle, contacting the Democrat to say McGreehan's nomination was a "great result for our constituency", adding: "I am proud that for the first time Fianna Fáil in Louth has a female representative in the Oireachtas."

So, now that she has that national platform, what does she stand for? What does she hope to change?

“One of my aims as an elected representative is to push for equality of access for all. Too many in our society do not have equal access, they are marginalised, and this is a disgrace.”

She continues: “As a republican I believe in the equality of people on this island and it is my responsibility to fight for the marginalised. For example; not having safe passage on a street as a visually impaired person or a person in a wheelchair or to improve access for people with disabilities entering the workforce. We need to work to provide access for the minorities in our society; so that the workforce reflects the diversity of the society we live in.”

This drive for equality comes from her childhood, she says, and her obviously political roots.

“As a child I repeatedly read the Proclamation of the Irish Republic and it would do us all well to read that document. Particularly the last few paragraphs where it demands equal rights and equal opportunities for all. This is what our country should be focused on and it is one of the main inspirations for me to be involved in politics.”