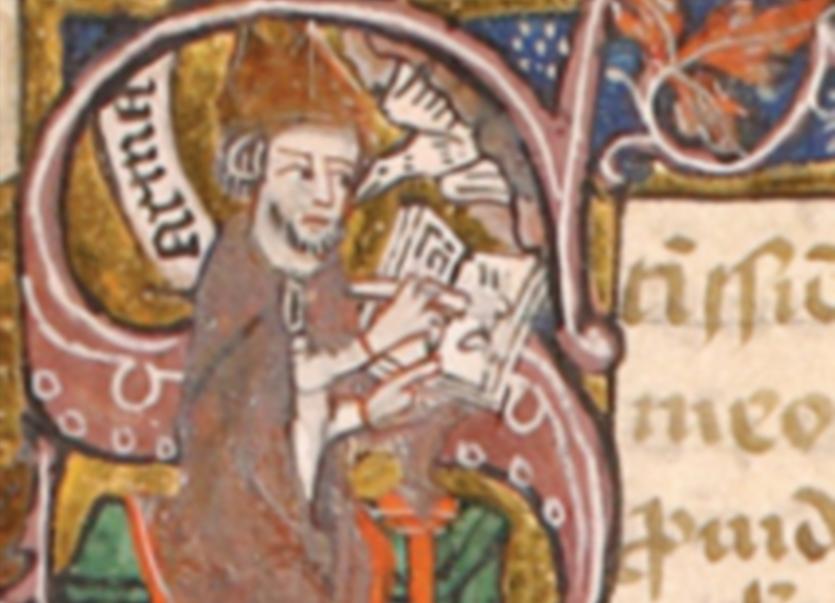 It was a Dundalk man abroad - Prof James H Murphy - who brought a quite remarkable, but little known (certainly from my perspective anyway), local historical figure to my attention last Thursday evening.

Prof Murphy, a professor of English at Boston College in the US - but Dundalk born and bred - sent an email to the Democrat suggesting, not unreasonably, that, should DkIT ever achieve university status (that’s another story...), it should be renamed in honour of a local man who, according to academics, influenced the likes of Geoffrey Chaucer (he of Canterbury Tales fame) and rubbed shoulders with popes and intellectual elites throughout his life.

Richard FitzRalph was born a little before 1300 and died in 1360. According to a biography by a TP Dolan, he was an archbishop, theologian, and scholar known throughout Europe.

Prof Murphy describes him as “perhaps the greatest Dundalk man ever.... (who was also) Vice Chancellor of Oxford University, Archbishop of Armagh, a leading international diplomat at Avignon and an important author.”

Upon his death, he was believed to have been buried in the graveyard of our very own Green Church here in town, but his remains and plot have since been lost to history.

His family roots couldn’t be any more Dundalk if you tried. Dolan says he was “born into the Anglo-Norman Rauf family, which was related to the Dowdall (Douedale) and Brisbon families of Dundalk.”

It’s very likely he was educated at the Franciscan monastery in Seatown - the belltower of which remains on the corner of Mill Street and Castle Road to this day.

He was, it has been recorded, “vain, mercurial, and energetic, a fine theologian, a great biblical scholar, and a brilliant preacher” who is, it is understood, the very first Irish person to ever have a book printed - the Defensio Curatorum (described as an “uncompromising text”) in 1474, just 34 years after Guttenberg had invented the printing press.

From reading a bit further about his life, it would appear that Richard FitzRalph was quite the contrarian - another Dundalk trait, some wags might say. He was a principled man who stuck to his guns fiercely - even in the face of powerful popes and archbishops. It sometimes made him an outcasted figure.

Dolan writes: “He wrote and preached against the privileges of the friars, especially the Franciscans, whom he attacked for their alleged hypocrisy over their vow of absolute poverty.” Dolan explains why FitzRalph might have publicly turned on his old Franciscan chums: “His change of heart was probably due to the dire state of the finances of his diocese, as the friars in his view were appropriating moneys due to the diocese, arising from their administration of financially beneficial duties such as burying the wealthy dead. His vehemence probably cost him further advancement.”

FitzRalph left behind over ninety sermons, which have become an invaluable record of the theological thinking of that era. Their value enhanced by FitzRalph’s meticulous record keeping and attention to detail in terms of dates, locations and language.

Despite ending up being buried back in the town he was born, FitzRalph was incredibly well-travelled throughout his 60-odd years, delivering sermons across Ireland, England and Avignon in France.

He was, which was surprising for such a figure from that era, also very outspoken and critical of the killing of “Gaelic Irishmen by his Anglo-Irish compatriots”.

As Archbishop of Armagh, he would have led a “very busy life” according to Brendan Smith in ‘Crisis and Survival in Late Medieval Ireland: The English of Louth and their neighbours, 1330-1450’.

In his book, Smith describes a strange late-night communication at FitzRalph’s manor in Dromiskin.

"Archbishop Fitz Ralph was awoken late one February evening in 1354 at his manor of Dromiskin to be told that the Hungarian pilgrim, George Grissaphan (the Hungarian adventurer who crossed the European continent) who had returned from St Patrick's Purgatory, needed to see him in Dundalk immediately. In a subsequent missive to Grissaphan, Fitz Ralph described how 'on receipt of these letters we rose from our bed at midnight and that same Tuesday we came to Dundalk'".

FitzRalph died in Avignon in November 1360.

It wasn’t until ten years after his death that his body was eventually returned to Dundalk where it was buried at St Nicholas Church. However, from the 17th century onwards there has been no trace of his tomb found.

According to Dolan, “the church, now considerably altered, contains a chapel dedicated to ‘St Richard of Dundalk’. There is an illustration of him in a manuscript made for Adam Easton (d. 1397), the English Benedictine monk and scholar, about twenty years after his death, which depicts him on the left side of the folio as an archbishop, with representatives of the four mendicant (of begging) orders being assaulted by devils on the other side.”

Perhaps Prof James Murphy in Boston is on to something about our forgotten friend Richard FitzRalph.

Perhaps he deserves a more fitting public remembrance in his own hometown?