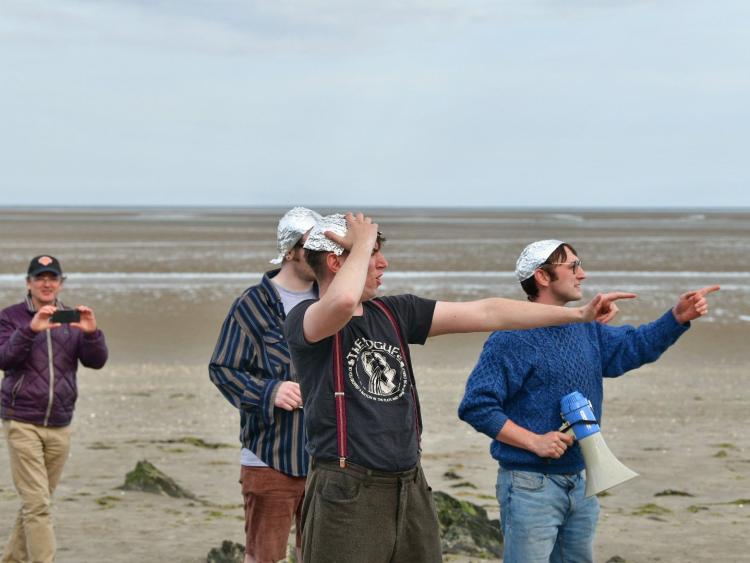 “They will try and paint everything as if they are victims. As if people were attacking them. All we did was put on tinfoil hats and stomp around the place like idiots. But they tried to turn that into us attacking them.”

Charles Hendy is speaking to the Democrat on the phone from his home on Thursday afternoon.

Himself and his brother Andrew - part of well-known local bands The Mary Wallopers and TPM -  are still digesting the reaction to their own rather unique beach protest on Tuesday evening in Blackrock.

That same evening an ‘anti-government’ and anti-5G protest was taking place on the same beach, hosted by Gemma O’Doherty and John Waters.

Charles and Andrew also had something to protest about.

“There were a helluva lot of people there on Blackrock that agreed with us,” says Charles. “They mightn't have been out with their tinfoil hats on, but they certainly didn’t want Gemma O’Doherty there and that crowd.

He continues: “If she was allowed to do that without anything (a response), people would be like ‘Dundalk and all those up there think Coronavirus isn’t real’, so we just turned out like everyone else turned out, to make a mockery of them.”

Charles and Andrew had their own ‘serious’ messages too.

“We just went a bit further with our slogans like: ‘Bring Back Dial-up’. I think that’s kind of what they want,” he adds with a shrug.

“But we were just pretending, we didn’t know them and it was our day. We were planning on going on protest. We never talked to them or went near them, we just had our own protest in front of them - and they weren’t too happy about it.”

While most messages have been overwhelmingly supportive since Tuesday, Charles admits, they’ve had to deal with some deeply unsavoury online attacks.

“We’re after spending the last two days just blocking people that are trying to scare us and intimidate us.

“You can look on our page, whether it’s the Mary Wallopers of TPM - there’s people, they’re all the same people now, but they mustn’t have much to do and they’re going around every single YouTube video of us and posting out these things.

“There’s people taking screenshot photos of our noses and putting anti-Semetic stuff on the internet about us, saying we were Jewish and that’s why we were doing it.

“The other thing is that there’s a lot of homophobic stuff. Neither of us are gay, but to see the stuff that’s being thrown at us - really nasty homophobic stuff. We have friends who are gay and it’s horrific - and these are adults!”

“That’s not just what they want. They want to drag the Irish flag through the sand a wee bit and that’s our main issue. They say they’re Irish, but they don't represent us and they don’t represent most people.

“You see how angry they get with us after having the craic. We weren’t doing anything that anyone would find offensive. We were just playing and they really have taken it mad. We’ve had to get rid of our details on band websites, because we were advised. They’re just lunatics.

“There’s not lots of them, but the few that there are, they’re fairly loud.

"They were making stuff up about us saying we were throwing sand at people and we were attacking people, but it’s all on video - we have a 40-minute video of the whole thing, so we’re not too worried about that."

Charles says they are trying to derail their music career - he doesn't appear to be too concerned, mind.

“I don’t think they’re going to be able to. They’re going around saying stuff like ‘lads you’ve lost a lot of fans with that stunt’ when I actually think it’s the opposite.

“If we’re losing fans like yourselves, well I don’t have a problem with that.”

That they were partly protesting against Covid-19 restrictions and the very existence of the virus, is something Charles cannot get his head around.

“I know plenty of people working on the frontline and that’s a total spit in the face to them. If we have the privilege of staying at home, and these people have to go out and work incredible shifts in hospitals, isn’t it nice that we have to just stay at home? Then you have these loopers running out onto the street going ‘We have a right to go outside’, well go outside your own door, but don’t come down to our place.”

For a “cherry on top” Charles says he has set up an online account to sell t-shirts with their own humorous beach slogans on them - with the money raised going to refugee charity MASI (Movement of Asylum Seekers in Ireland).

“We were thinking 'what would be the most insulting thing towards that crowd?' and we are also donating all the money to the refugee organisation.

“It’d be the cherry on top if they ended up raising money for a refugee charity,” he says, smiling.

The Mary Wallopers will be hosting a virtual pub gig on their Facebook page on Friday at 9pm.