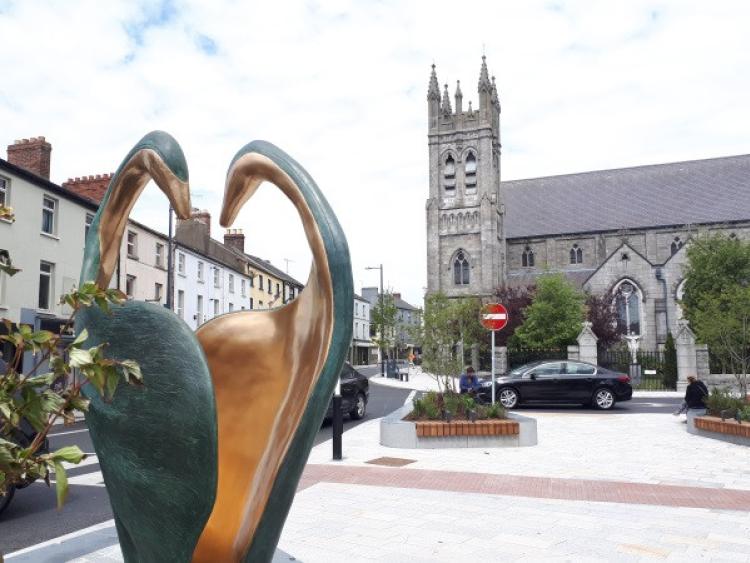 Over the last few days, anyone walking along Clanbrassil Street and Church Street in Dundalk's town centre couldn't help but have noticed a fantastic new addition to the public realm there.

‘Heart Space’, a new sculpture at the piazza created opposite St Nicholas' Church depicts two abstract swan figures, which, according to local artist and creator Breda Marron, "from a distance seem to dance as one, yet when you come closer you realise, they are separate individuals, simply in rhythm with each other."

Talking about the genesis and idea behind the new installation, Breda says, given the current global situation, it makes more sense now.

"It seems serendipitous that the inspiration for the piece in 2018, came from the concept of two beings, showing true love, by holding space for each other, without touching."

The sculpture was commissioned as part of the European funded, Town Rejuvenation Project for Dundalk Town Centre.

Breda says the essence of the sculpture also links back to the Celtic concept of an ‘Anam Cara’, the Irish phrase for a ‘Soul Friend’.

"One who sees and accepts you for who you are and acts like a reflective mirror, reflecting the best of your inner light back to you," she adds.

The local artist goes on to explain that St. Nicholas’s Quarter has a strong link to Scotland’s National Poet, Robert Burns, as his sister Agnes is buried in St. Nicholas’s Church of Ireland and her home is now part of the nature park at Stephenstown pond, close to Dundalk.

"This connection to the Scottish bard led me to explore the heritage of the Celtic bards and druids of ancient Ireland.

"In ancient Ireland, the bards would wear a special ceremonial cloak, made of songbird and swan feathers. They believed this cloak connected them to the transformational power of the swan acted as a source of inspiration and creativity, a connection to a deeper awareness."

She continues: "‘Heart Space’ captures the essence of a cloak of wisdom being wrapped around two birds of pure love and light. An inner section of polished gold captures the sunlight and links to the concept of 'a heart of gold' and the positive energy shared between the two swans.

"It's always amazing to see an idea transform from a vision into a public sculpture but this sculpture has brought that to a whole new level.

"It’s been fascinating to step back and watch the response from local people as they pass by and see the sculpture for the first time.

"It has been an honour and privilege to have been chosen by Louth County Council, to create this sculpture for Dundalk. I hope it finds a place in the hearts of the local community and visitors to the area."